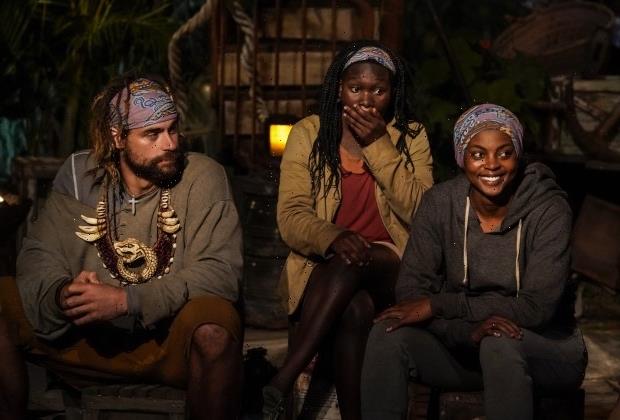 Warning: This post contains spoilers from Wednesday’s episode of Survivor.

On Wednesday’s Survivor, the Do or Die twist came back to wreak havoc, ultimately forcing Lindsay to play a very dangerous game of chance at Tribal Council. But luck was on her side after she correctly selected the fire box, and earned herself a spot in the Final 6. Unfortunately for Drea Wheeler, that not only meant that a vote was about to go down, but also that her potentially big move of using her Knowledge Is Power advantage would shortly backfire, all thanks to a sneaky Omar. (Read a full recap of Episode 11 here.)

Here, Drea details everything that led up to her elimination — including her relationships with Omar and Mike, and decision to sit out of the challenge — and reflects on the reaction from this season’s big race conversation.

TVLINE | While I was not happy to see you go, the way you went out with a smile on your face and in such bright spirits made my heart happy as a Survivor fan. What were you feeling in that moment?
DREA WHEELER | I felt a release at that moment. It was weird. It was like, I did it. I played hard, I stayed true to myself, I was very proud of the game that I played, and happy that I went out fighting. That’s how I felt.

TVLINE | Jeff doesn’t let just anyone speak those final words — “The tribe has spoken” — so you must’ve made some impact. How did that feel?
Awesome! I have a love affair with Jeff. I love him! He gets me. I felt like it was fitting for that to be the way my storyline ended. [Laughs] It was a great experience. 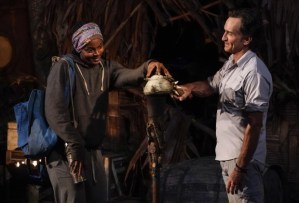 TVLINE | You and Mike seem to have a mutual respect. What was your relationship with him like out there and what’s it like now?
I adored Mike there, I adore Mike now. He’s awesome. He’s an emotional player. He wears his heart on his sleeve and I respect that. Look, I knew Mike was coming for me, so I was just like “I’ve got to get him before he gets me, but if he gets me, at least I’m going to kick and scream while I go out.” It was just respect for Mike at that moment like, “You got me! But I was trying to get you!” [Laughs]

TVLINE | Walk me through a bit of your reasoning to tell Omar about the Knowledge Is Power advantage.
I was closer to Omar than most people think. We had some heart-to-heart, emotional conversations that were pretty personal. Hai was a part of that as well, who I instantly regretted getting out. I felt like it was in Omar’s best interest to keep me in the game because people were seeing him going around talking. He was everywhere. So I was just like, “We’ve got to have each other’s backs, so I’m telling you this, but help me make the moves.” We were closer than what you saw, basically. But obviously, he was closer to someone else than me. [Laughs]

TVLINE | Despite having been the one voted out, any regrets sitting out of that immunity challenge?
No. I have zero regrets. I almost fainted while walking up to that challenge. I was starving. They were eating like one or two coconuts a day, but I’m allergic to coconut and seaweed. My body had gone into ketosis. Walking up to our camp would take me like 10-15 minutes. I would have to wait and catch my breath. I probably would have passed out and would have been medically evacuated if I had done that challenge, so no I don’t regret that.

TVLINE | I do want to revisit the Tribal where Tori was voted out. Seeing Chanelle and Rocksroy voted out back-to-back instantly changed the vote that night. How did you feel about how that conversation about race was portrayed, and is there anything else you want to say about that night?
I think that what you saw was what happened. I can say that I’m very proud that Survivor did it that way. When I watched it, I was crying because I was just like… they let me speak my truth. They didn’t edit me, they didn’t edit my feelings, they didn’t edit my emotions, they didn’t edit what transpired. They told the truth. A lot of networks wouldn’t do that, but they did that, and I was proud of that. 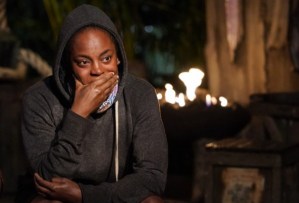 In that moment, I said what I felt. “I’m not going to let this happen and I’m going to prevent it from happening.” I knew they were all coming for me. I knew Maryanne was voting me out. They didn’t show this, but I told Maryanne at one point, “If it’s not me, it’s you. I’m going to use my idol. They all know you have an idol. I suggest you use your idol.”

And I was crying. Then I was crying because I was in shock that I was crying, because I don’t cry. Ask my family and my friends, I rarely cry. Then it was like, “I’m crying on television.” Ugh. I can’t explain it. In that moment, I remember telling my family I knew I lost. It’s weird. I knew they would not take me to the end. There was just a lot of emotions at once. I was very real, very raw, very vulnerable, and I was in shock that I did it in front of cameras, but you just forget about all of that. For me, Survivor was just my truth. I was just truthfully myself.

TVLINE | Did you hear any feedback from fans? What was the reaction?
The general reaction was positive. I had one article sent to me that touched my heart and I cried. Hard. Out of all the comments that meant the most to me, a guy sent me screenshots about his father. His father is a right-wing Republican, and he said that his dad and mom had a conversation about it, and they were texting him, and [his dad] was just like, “This is the first time I realized what Black people mean when they say it’s not about you. It was the first time I could actually see it and actually feel it.” And he was like, “My mom and I watched it again and had another discussion about it… I’m so enlightened. I understand it. I get it. Survivor has just broken down how Drea felt about racism to me.”

TVLINE | I love to think about Survivor what-ifs, so let’s say your group had voted first that night, and you hadn’t seen Rocksroy sitting on the jury bench. How does that night shake out?
So what you don’t know is that I went to Tori that day and told her we needed to work together. We needed to go back to being Ika strong. I really wanted to work with her. I wanted to work with strong women and I saw her as a strong player. I don’t know why she didn’t want to work with me, but even then I had gone to her and was like, “Can we please work together on this?” And she told me yeah. I had already planned on possibly using my idol because I didn’t really trust her, so I probably would’ve used my idol, played for Tori, and Tori would’ve gone home. 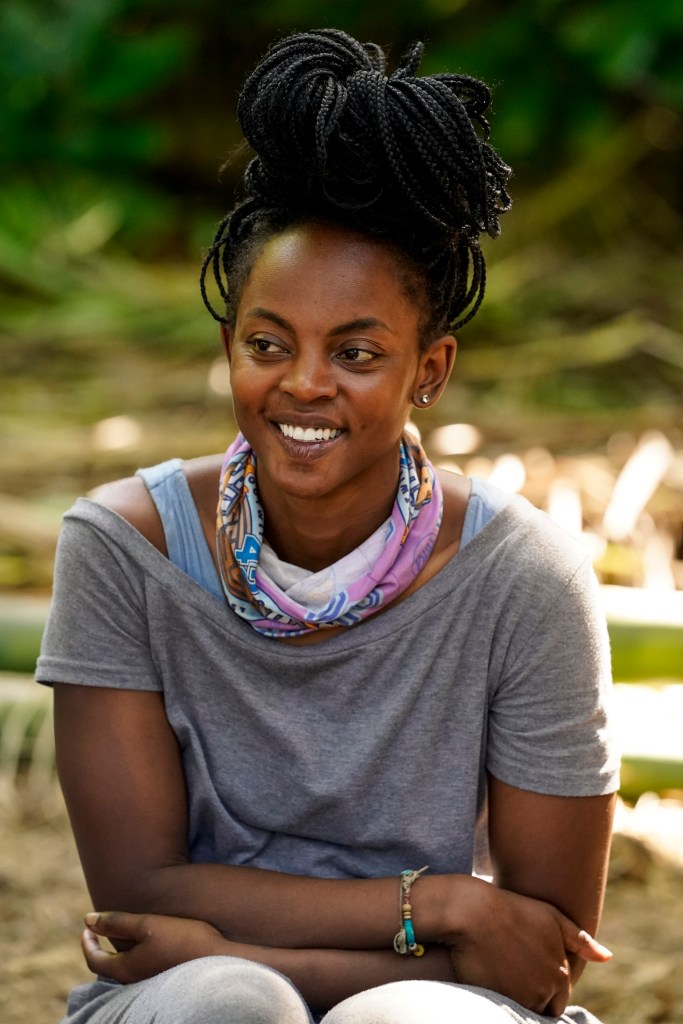 TVLINE | What was your perception of Omar’s game at the time. Were all his big moves visible or were you unaware of the strings he was pulling?
No, they weren’t visible to me. Omar’s playing an emotional and strategic game which is very tricky. You’re playing with people’s emotions in an already emotional game. I didn’t see it because I trusted him. I said what I said so people could open their eyes. I didn’t understand the game he played until I got to Ponderosa and then I was like… [look of shock].

TVLINE | So who’s the one to watch out for right now?
I think Romeo is an underdog. I think that hopefully what I said sparks a light under him. Seeing him in his confessionals was a totally different player than what I actually saw in the game. I hope that he brings some more of that out and that we see him bloom because I thought he was dying! Seeing his confessionals proves that he still has some spark in him, so I’m rooting for him. I had no idea he was eating all of our rice. So maybe he’ll come back and surprise us, I don’t know!

TVLINE | Is there anything you wish had been shown in the edit that was left out?
I can honestly say that they showed my gameplay amazingly. I wish you guys had seen the conversation that I had with Jonathan after he thought I was being mean to him about the fish nets. Lindsay came to camp and was like, “Jonathan said this about you,” and I was just like, “I’m not going to play this game.” Then he came to camp and I was like, “Jonathan, I’m sorry if you felt this way but you’re our Aquaman! You’re our fisherman! I need your help. It’s not me trying to antagonize you, it’s me begging you to help me because I don’t know what I’m doing and I’m genuinely starving just as much as you because I haven’t eaten. I’m a Texan. I hunt. You fish. Please help me!” It was a very beautiful moment and he was like, “I apologize,” and we gave each other a hug. It was awesome.