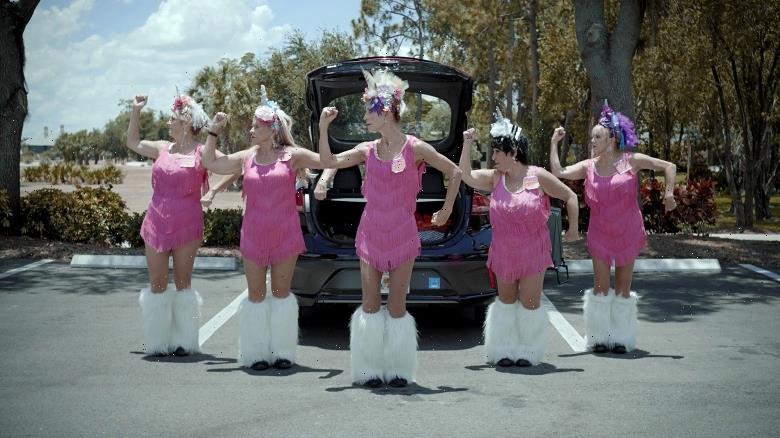 When the Sundance Film Festival kicks off in January, around a fifth of the 82 features in its lineup will already have distribution.

Amazon boarded the Regina Hall occult drama “Master” all the way back in 2019, announced it had teamed with Temple Hill for “Emergency” in April, and is listed by Sundance as the distributor for Amy Poehler’s “Lucy and Desi” doc. Netflix has two films, the three-part “jeen-yuhs: A Kanye Trilogy” and Rory Kennedy’s “Downfall: The Case Against Boeing.” Several theatrical distributors are arriving at the festival with titles as well: Neon, IFC Films, and A24 each have two films.

That still leaves several dozen films up for grabs, the vast majority of them world premieres, in what could be described as a seller’s market. Distributors in recent months have found less to choose from as growing streaming snap up titles. But in a distribution landscape turned upside down, buyers are measured about what they’re willing to spend for.

The first acquisition tied to the upcoming festival happened on December 16, when Vertical Entertainment and Roadside Attractions announced they had picked up “Alice.” Directed by Krystin Ver Linden, the drama is among the 42 percent of films in the Sundance lineup from first-time feature directors. “Alice” offers a strong cast in Keke Palmer and Common, and a compelling modern day slavery logline.

Speaking earlier this month during a Film Independent Producers at the Table panel, Roadside co-president Howard Cohen was asked how completed films at festivals can get his attention. “You’re looking at that streamer, VOD axis as underpinning everything, so I think that puts more pressure on genre and cast,” he said. “Originality percolates in there as well.”

The “Alice” deal will see Roadside handle an exclusive theatrical release when the film is released in March, hopefully capitalizing on strong buzz out of the festival. A rep said a VOD component has not been determined, but Vertical Entertainment’s involvement strongly suggests a robust at-home play for the film. Vertical’s titles have been big performers on pandemic-era VOD charts. A theatrical release from Roadside, distributor of Oscar winners like “Judy,” could help boost the film’s profile during a time when VOD revenue can help make up for a specialized box-office that hasn’t fully recovered.

Below, find a constantly updated list of acquisitions, beginning with the most recent deals.

Directed by Maria Loohufvud and Love Martinsen, “Calendar Girls” profiles a Florida dance team comprised of women over 60 who are determined to prove that age is just a number.

Juno announced it acquired North American rights a week before the festival.

Co-directed by poet, musician and actor Saul Williams and playwright-director Anisia Uzeyman, “Neptune Frost” is an Afrofuturist musical set in Burundi that serves as a call to reclaim technology for progressive political ends.

It premiered in the Cannes Directors Fortnight before screening at TIFF and NYFF this fall. Kino Lorber announced it acquired worldwide rights on December 17. It plans to release the film theatrically in the U.S. in 2022 followed by a release on Kino Now, VOD platforms, and home video. The distributor will initiate international sales at Sundance and Berlin.

Krystin Ver Linden’s feature debut stars Keke Palmer as Alice, an enslaved person who, after she escapes from a Georgia plantation, learns the year is actually 1973. She is rescued by a disillusioned political activist Frank (Common). Common also produced the film’s music and curated its songs along with Karrien Riggins and Patrick Warren.

Vertical and Roadside Roadside announced they acquired North American rights on December 16. Roadside is planning an exclusive theatrical release on March 18 in the U.S.; details on a VOD component have not yet been announced.

Showtime will premiere the series on cable and VOD platforms on January 30.

For her documentary debut, Amy Poehler takes a look at the relationship of Lucille Ball and Desi Arnaz, including their personal and professional lives, innovations in studio production, and other bigger concepts.

The Imagine Documentaries and White House Pictures project was announced in August 2020. Amazon was revealed to be the film’s distributor when Sundance announce its lineup in December

Dutch historian and cultural critic Bianca Stigter’s feature documentary ruminates on a three-minute, 16mm home movie shot by David Kurtz, which captures on film the Jewish inhabitants of a Polish town one year before the Nazis invaded. Most of those residents were eventually killed in the Treblinka extermination camp. The documentary, narrated by Helena Bonham Carter, is the latest collaboration between Stigter and co-producer Steve McQueen; Stigter was an associate producer on McQueen’s “12 Years a Slave” and “Windows.”

The film premiered at Telluride and screened at Venice and TIFF. Super LTD announced on October 19 it had acquired the film’s North American rights and plans to release it in theaters later this year.

IFC and FilmNation teamed for U.S. rights after the film won the Golden Lion at Venice in 2021.

Netflix announced in September that it will release the film.

James Ponsoldt’s film is set in the waning days of summer for four friends, all set to go their separate ways when they start middle school. They soon stumble across a mystery that takes them on a life-changing adventure. The cast includes Lake Bell, Megan Mullally, and Lis Barnett.

Joachim Trier’s Oslo trilogy is completed by this story of a 30ish woman (Renate Reinsve) grappling with her romantic and career choices. When her older partner (Anders Danielsen Lie), a well-known graphic novelist, wants to have a child, she starts a flirtation that leads to their breakup.

Neon picked up the U.S. rights to the film in July after its Cannes premiere.

Based on their 2018 Sundance award-winning short of the same name, director Carey Williams and screenwriter KD Dávila’s dark comedy follows a group of straight-A college students in their effort to become the first Black students to complete their school’s frat party tour. Their plan goes awry when they find a white girl passed out and must contend with the risks of calling the police under life-threatening optics. It stars Sabrina Carpenter, RJ Cyler, Donald Elise Watkins, and Sebastian Chacon.

Amazon Studios and Temple Hill announced the film in April.

Macedonian-Austrialian filmmaker Goran Stolevski’s feature debut is set in an isolated 19th century Macedonian village, where a young girl is transformed into a witch by an ancient spirit. After she inadvertently kills a villager and assumes her body, the witch (played by multiple actors, including Noomi Rapace, Alice Englert, Carloto Cotta, and Sara Klimoska) continues to inhabit different people.

The film was produced by Lightbox in association with HBO and Sky. It will have a worldwide theatrical release in summer 2022 to mark the 25th anniversary of Diana’s death, along with an HBO TV and streaming premiere in the U.S.

Title: “When You Finish Saving the World”
Section: Premieres
Distributor: A24

Jesse Eisenberg’s directorial debut is an adaptation of his audio play, a comedy-drama that stars Finn Wolfhard as Ziggy, a high school student who performs original folk-rock songs to an online fan base, mystifying his uptight mother Evelyn (Julianne Moore). After Evelyn, who runs a shelter for survivors of domestic abuse, observes a bond between a mother and teenage son who seek refuge at her facility, she decides to take the teen under her wing against her better instincts.

A24 financed, produced, and will distribute the film, which is part of producers Emma Stone and Dave McCary’s first-look deal with A24, announced in October 2020.

Finnish director Hanna Bergholm’s feature debut follows a teenage girl who struggles to please her image-obsessed mom. After finding a wounded bird in the woods, the girl brings its strange egg home, hatching a creature that becomes a close friend, surrogate child, and living nightmare.

Produced by Imagine Documentaries, the film was originally conceived as a series. Netflix announced in April 2020 that it acquired the project and planned to release it as a movie.

Regina Hall stars as the titular character, the name given to the dean of students at an elite New England university. The master, a first-year student (Zoe Renee), and a literature professor (Amber Gray) navigate politics and privilege at the school as they encounter increasingly terrifying manifestations of the school’s haunted past and present. The film marks writer-director Mariama Diallo’s first feature.

The project was announced by Amazon in November 2019.

Written, directed, and edited by Kogonada, “After Yang” follows a family (Collin Farrell, Jodie Turner-Smith, and Malea Emma Tjandrawidjajazu) trying to save the life of their robotic family member, Yang (Justin H. Min).