The Roy family has returned, and already they’re taking up chunks of premium real estate. Aside from the profiles, prominent billboards, HBO’s coveted Sunday night timeslot, and all the other hallmarks befitting the long-awaited emergence of TV’s only good show, “Succession” Season 3 starts with its split family in flight, and ends with the top two shit-stirrers in seemingly opposite straits: Kendall (Jeremy Strong) thinks he’s sitting pretty, while Logan (Brian Cox) goes sprinting into the Sarajevan night, searching for whatever next move might save him. In between, they’re strategizing in helicopters, luxury cars, and private jets, tearing through Manhattan in a massive SUV and soaring through international airspace in twin planes.

For a series overflowing with excess, it’s still astounding to see how much the Roy family will waste just to buy themselves some time.

Frankly speaking, they need it. Costly decisions pile up faster than their fuel bills, starting with Kendall, the de facto “loser” of this week’s episode. (This season’s father/son battle royale sure feels like a title fight, so why not treat it like one with round by round champions?) Kendall lost a member of his team less than a block from his parking spot (Karolina, as played by Dagmara Dominczyk), it turns out the pope isn’t a new fan (he landed “a pope, not the pope” on Twitter), and his first call with Logan since throwing dear old daddy under the bus on live TV was less than ideal. Forget, if you can, Kendall’s lame Jack and the Giant Beanstalk retort (teased magnificently in the first Season 3 trailer); his biggest mistake was offering mercy.

When Kendall tries to convey an earnest message to his father — that despite making Logan complicit to the company’s cruise-line calamities, he doesn’t want to see his father behind bars — the no-longer-proud papa lashes out. “That’s fucking sanctimonious bullshit,” Logan screams. “It was a fucking play. It was a play, it was a fucking move, so don’t act like a cunt to me.” The whole interaction supports the belief that Logan was actually proud of Kendall for betraying him; that the inscrutable expression creeping over his face as he watched his son make his “fucking move” was more pride than anger. So as soon as Kendall backs off his strictly adversarial stance, Logan is displeased. He wants his son to be ruthless because it’s the only character trait he respects. (See also: Logan’s phone call with Roman later in the episode.) 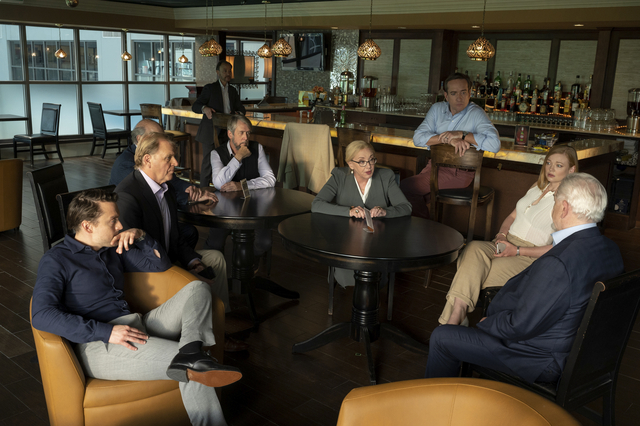 But this isn’t the only conversation that goes badly for Kendall. Each subsequent call to his family members and colleagues, as he tries to plant seeds of secession among his father’s allies, results in a worse response. Frank (Peter Friedman) does exactly as he’s told, listening to Kendall’s pitch without responding. It’s hard to tell how much of the argument landed (I doubt Frank believes Kendall “did this for [him],” let alone “the soul of the company”), but Logan repeatedly telling his COO that he’s untrustworthy (three times this episode!) certainly won’t spark any loyalty. Next up, Kendall tries Geri (J. Smith-Cameron) — who sends him straight to voicemail. (She really is brilliant, no caveats required.) There’s nothing there for Kendall, so he tries Shiv (Sarah Snook), but his flippant pitch isn’t nearly serious enough for her, and she hangs up on him. By the end of the episode, Kendall only has who he started with: Greg (Nicholas Braun). And while he may get another shot to woo Shiv (and the rest of the siblings), so far, Logan is seeing the players more clearly than his son. (If Frank is closest to siding with Kendall, then Shiv, with Geri as a non-starter, that’s exactly how Logan treats them: Frank is not to be trusted, Shiv is sent on errand duty, and Geri lands the CEO gig.)

But perhaps the most ominous sign of Kendall’s odds to win back Waystar Royco — by taking down his dad, without implicating himself, or damaging the company, or losing control at the shareholder meeting — is that he’s utterly unprepared when the episode starts. Watching him pace around the bathroom, sinking slowly into an unfilled tub, brings back memories of the Season 2 premiere, when Kendall was pulled out of his recovery spa appointment to go on television and vouch for his father. While he’s no longer scared silent, Kendall’s own speech shocked him back into a stupor; it’s as if he didn’t trust himself to go through with his own plan, and thus couldn’t make any plans for what happens next. At the top of the episode, he says he’s going to the Waystar offices to “plant a fucking flag,” which never happens, and then maybe “straight in to see the fucking Feds,” which was also a no go. He got his lawyer, but he barely got his attorney. And no guarantees? Nowhere to even go? Kendall not only crashes his ex-wife’s apartment, he asks her if she thinks he can win because he doesn’t know. (Of course, that doesn’t stop him from talking over every top-tier adviser he hires, since his plan to hire “the BoJack guys” to run his Twitter is crucial to his success.)

“All these brilliant fucking women,” Kendall says to Greg, after his girlfriend, Naomi (Annabelle Dexter-Jones), tells everyone’s favorite tool to open a bottle of wine gifted to Rava (Natalie Gold), Kendall’s ex-wife, by her deceased godfather. “I must be doing something right.” That he says this after something very wrong happens is sadly not as important as his clear admission that he doesn’t know what he’s doing in the first place. So yes, Logan draws first blood as this week’s split-decision winner: Even when he loses his first-choice attorney (who Shiv “failed” to secure), ends up banished to a Sarajevo hotel that’s “not really that nice” (per Hugo’s own admission early in the episode), and has to give up his CEO title to Geri (hell yes), he’s still somehow ahead of his delusional son — because even when your entire strategy boils down to the furious cry, “we’ll fucking beast them,” that still beats having no strategy at all. 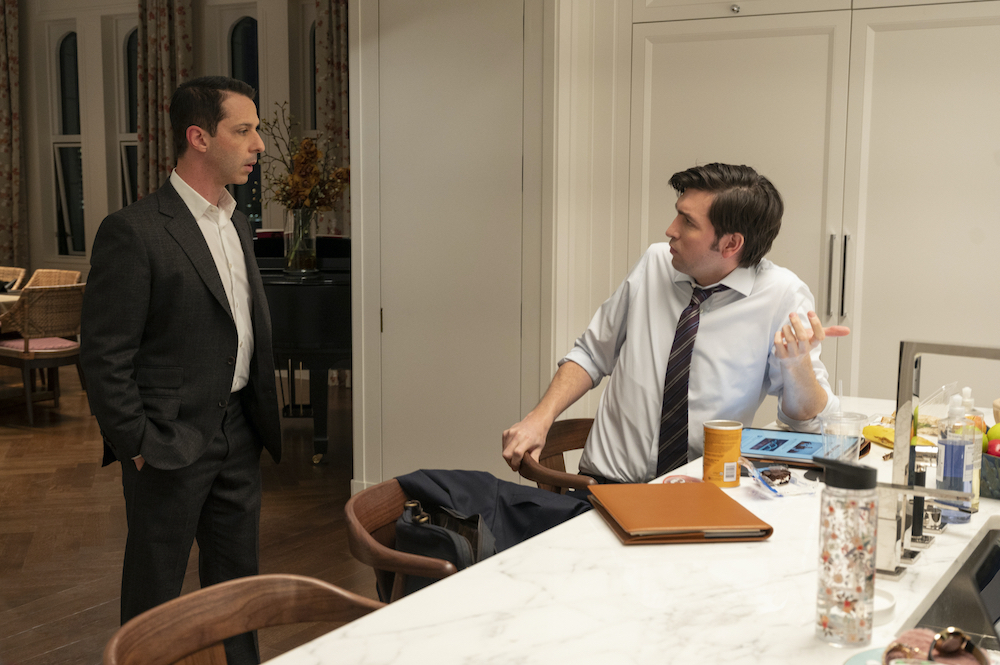 – That Tom (Matthew Macfadyen) and Greg never share a scene in the Season 3 premiere is perhaps its most egregious sin, but there were still moments to treasure from each of them. Greg kicked things off with a demeaning self-assessment of his abilities in a crisis (“I’ll have to break the door down, but I don’t really want– don’t think I’ll be able to.”) before illustrating his inabilities without nearly as much foresight. (Personal favorite: shouting “no comment” to swarming reporters even after he’s been told, “You don’t have to say that Greg, just don’t comment.” Clearly, Greg’s understanding of journalistic ethics remains crystal clear.) As for Tom, he really took it well when Logan referred to him as “kind of family.” I’d give Logan credit for knowing his daughter’s relationship is falling apart, if I didn’t think his lack of respect for Tom supersedes any emotional insight.

Shiv Show at the Fuck Factory

– Is losing the CEO job for a second time enough to push Shiv to Kendall’s side? Is that where she told the driver to take her when she suddenly changed plans post-phone call from Roman? Is she sick of having her sound advice ignored whenever it doesn’t suit her dad’s devious designs? Somehow I doubt she’ll hitch her wagon to Kendall’s, but maybe there’s a move she can make for herself in the meantime.

Remember how I said the only trait Logan respects in his children (or anyone, really) is ruthlessness? Well, that’s what cost Roman his shot at the top chair. Prior to calling his dear old dad, all of Logan’s chosen advisors agreed that Roman could do the job. And at first, it seemed like Logan might go along with it, too. “I think it should be me,” Roman says. “It’s my time. I can do it, I want it, and I think I can do it.” Then as Logan starts to speak, Roman adds a perilous “but” and couches his pitch for himself with a pitch for Geri. To make matters worse, he ends the call with, “I do want it, but no hard feelings. Love you, Dad” — which, while a perfect set-up for Logan’s laugh line of “Roman’s out,” also doubles as a cold reminder that love is the furthest emotion the old man feels for his children. Had Roman just said, “gimmie it,” who knows where he may have been sitting next week.

– “Food? Swallow. We’re on saliva and adrenaline here. Until we’re on a plane, no local foods. I get the shits, we’re fucked.” – Logan Roy

Best Line That Could Still Air on ATN

– “Carl, if your hands are clean, it’s only because your whore house also does manicures.” – also Logan Roy

“Succession” Season 3 premieres new episodes Sundays at 9 p.m. ET on HBO and HBO Max. Seasons 1 and 2 are available to stream via HBO Max.