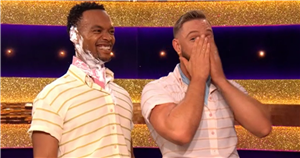 John Whaite was in for a big on air surprise when he finished his dance on Strictly Come Dancing.

The Strictly star and Bake Off winner was dancing again on Saturday night (23 October) alongside his professional dance partner, Johannes Radebe.

The pair performed an energetic Charleston routine to the French song, Milord by Édith Piaf, which saw them act as French bakers and wave around baguettes.

The couple clearly impressed the judges too, because they bagged a whopping 38 points with 10's from Shirley and Anton.

The whole audience were on their feet with with judge's loving the routine, and even stern judge Craig Revel Horwood was left impressed by the dance.

Craig said: "I loved the French vibe, the cancan and the baguette, which takes me back to the days of Moulin Rouge."

However, the fun didn't stop there because when it came to his post-dance interview, John got a live video call from his local pub.

Host Claudia Winkleman had said: "Let's talk about the support from your friends and how important your local pub is to you."

When asked about his friends at the pub by Claudia, John recalled the time when his friend Shirley helped him out at school.

He said: "Shirley was a dinner lady at school, and when I went in with too much fake tan on once, she gave me mascara to take it off."

He continued: "So they're my friends at the pub and they'll be watching tonight because they've actually got a TV put in the pub for me."

Claudia then revealed: "Not only are they watching, we are also going to go to the Eagle and Child live."

John was astounded as he said: "You're not!"

John's local pub burst onto the screen via video call, and the venue was packed full of John's cheering friends.

John's friend Shirley was overjoyed with John's performance, explaining that she was "wet" from sweating so much.

Shirley said: "You are the dream team guys, you're gonna win this. Bring back home that ball [glitterball trophy] back to me, baby!"

John was delighted as he began clapping, and the whole pub erupted in applause before the segment moved on.

John has already had the top mark of ten from every judge on the BBC One dance show except Craig Revel Horwood.

Since John won the third series of Bake Off, he has started presenting on Steph McGovern’s Packed Lunch on Channel 4 as well as ­writing many cookbooks.

For more of the latest showbiz news from the Daily Star, make sure you sign up for one of our newsletters here.