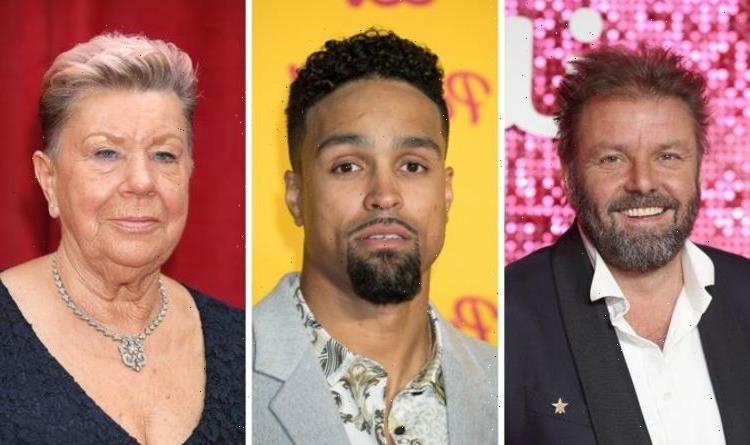 Strictly The Full Monty is set to return on December 13 and is bringing with it another celebrity line-up. The ITV show has proved to be a smash-hit before, as the stars dance, strip, and laugh with host Ashley Banjo. The show is set to be a night of entertainment for viewers, but also an important one as the stars share their own first-hand experiences of cancer and raise awareness of cancer checks.

Who is appearing in Strictly The Full Monty?

This year presenter and property expert Martin Roberts is one of the big names joining the cast.

Roberts is best known for the BBC series Homes Under the Hammer, but also appeared on I’m A Celebrity… Get Me Out of Here! and Put Your Money Where Your Mouth Is.

The star has been teasing his involvement on social media. On Instagram, Roberts wrote: “Me and my lovely dance partner Laila [Morse] are waiting in the wings for tomorrow and Tuesday at 9pm on ITV.

“It was one helluva’ journey, with tears, trauma, tantrums, and oh yeah, leopardskin print thongs.” (sic)

EastEnders fans will instantly recognise Laila Morse, best known for her long-standing portrayal of Big Mo on the soap.

She has been making numerous appearances in celebrity competitions over the years, with the star also appearing on I’m a Celebrity.

Morse could also be seen on Celebrity Chase and Celebrity MasterChef.

Christine McGuiness is a model and regular contributor to talk shows such as Loose Women.

She used to be a regular on the Liverpool modelling circuit and has won numerous beauty pageants over the years.

Viewers will know her husband, as the model married Paddy McGuiness in 2011.

Musician and actor Duncan James will be performing tonight, best known for singing in the band Blue.

He is familiar with celebrity competitions, having already made an appearance on Strictly Come Dancing and Dancing on Ice.

He will also be familiar to Hollyoaks fans, having made a few appearances on the soap.

Sports star Colin Jackson will also be appearing on the programme this year, best known for winning an Olympic silver medal.

He is a world-renowned sprinter, specialising in the 110-metre hurdles.

He became world champion twice and world indoor champion once.

Brenda Edwards first came into the public eye back in 2005 when she came fourth in The X Factor.

Since then, she has made countless appearances on daytime TV.

Edwards is best known today for being a panel member on Loose Women.

Demi Jones will be familiar to fans of Love Island, finishing third place in season six of the dating show.

Since then, she has been keeping fans up to date on her social media, showing off some recent modelling snaps.

The star has been doing a lot of charity work, posting on Instagram: “Emerald & Ivy Ball. In which over £800,000 was raised for Cancer Research UK.”

Another Love Island alum, Teddy Soares appeared in the hit show back in season seven.

Today, he is best known for being an Instagram influencer, regularly sharing his life with fans on the social media platform.

His celebrity status skyrocketed because of the show and is now followed by millions of fans.

Rounding out this year’s line-up is husband and wife James and Ola Jordan.

As both are professional dancers, they will be well suited to the ITV competition.

They are best known for working on Strictly Come Dancing and Dancing on Ice.

Strictly The Full Monty premieres on December 13 at 9pm on ITV.