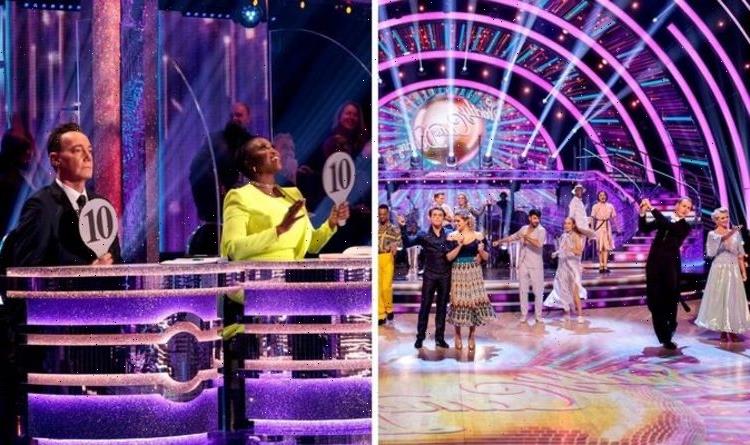 Sunday’s week eight results show is due to air at 7.20pm, but once again, spoilers have been “leaked” online, leaving Strictly Come Dancing fans fuming. As a result, viewers of the BBC competition show have taken to Twitter to express their disgust – however, the supposed results themselves have also left many questioning the programme.

Sunday’s results show is filmed on a Saturday night following the live show, and as such, results are often spilt to the public.

“The Strictly Spoiler” hashtag has been shared widely across Twitter, meaning some fans who didn’t want to be in the know have found out who might be leaving before they tune in to the results later.

While some enjoy being able to get a glimpse at the Sunday show’s conclusion ahead of time, other fans are not so pleased.

Teresa Hutchinson argued: “Please change the result show. Last nights results have already been leaked and we already know who has left the competition.

“This very disappointing and will keep happening until you change it. #Strictly.”

Liam Shaw fumed: “Fed up of hearing the bull**** of how every year the BBC say they’re annoyed/disappointed at the #Strictly result getting leaked each week.” (sic)

Others were more upset by the apparent outcome of the results.

G Unit penned: “Time it stopped being the judges choice. We vote so should be lowest added to judges and bottom goes home. Prevents any bias or favouritism.”

“NO WAY!!! What a joke,” shared Carole, while JoPauGeoRi called it “an absolute scandal”.

Viewers won’t know for sure who is set to leave the show until they tune in this evening.

However, heading into the results show, things aren’t looking good for the likes of AJ Odudu, Dan Walker and Tilly Ramsay.

All three celebrities scored under 30 points on Saturday evening after failing to hit it off with the judges with their routines.

AJ’s scores in particular come as somewhat of a shock having previously topped the leaderboard in recent weeks.

The TV presenter and her pro partner Kai Widdrington only racked up a score of 28, with judge Craig Revel Horwood admitting he was “disappointed” with their routine.

Tilly and Dan, on the other hand, were tied for second-bottom with scores of 29.

But will it be one of these three celebs who say their goodbyes or could another star face the axe?

Strictly Come Dancing continues with the results show tonight at 7.20pm on BBC One.