Ranvir, 43, and Giovanni, 30, had to perform two routines for the semi-final of Strictly Come Dancing, with their second being the Jive. They danced to Candy Man by Christina Aguilera, 39, and hoped to replicate the success they had achieved with their Waltz earlier on in the evening. However, the panel wasn’t overly impressed and as result, Craig Revel Horwood, 55, scored the pair a five and viewers of the BBC dance show were not happy. 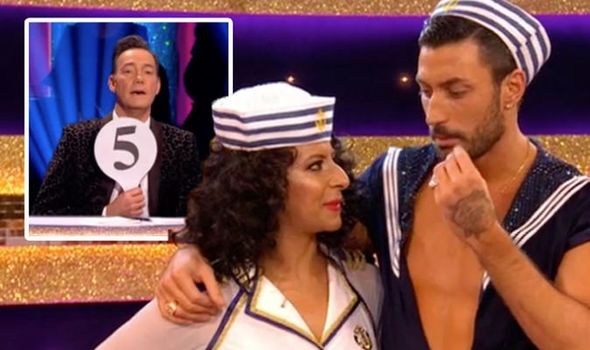 Another added: “Five for Ranvir? Bit harsh for a semi-final? No? #Strictly,” with a third commenting: “Yikes a five? #strictly.”

Head judge Shirley Ballas, 60, marked the couple a six for their Jive with Motsi Mabuse, 39, scoring the highest with a seven.

A fourth responded to the combined score: “18? Come on! Some VERY questionable judging going on tonight… Go @ranvir01 and @pernicegiovann1! #Strictly.”

“Oh dear, suddenly, Ranvir doesn’t look a cert for the final. Come on people, get behind her! #strictly,” a fifth opined.