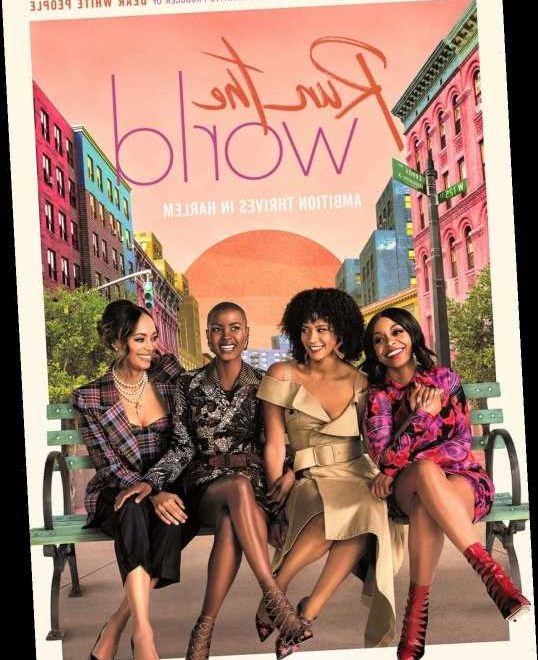 In a time where representation and inclusivity matters more than ever, Starz's upcoming series Run the World has arrived at the right time.

Starring Amber Stevens West (Whitney), Andrea Bordeaux (Ella), Bresha Webb (Renee) and Corbin Reid (Sondi), the Harlem-set series follows a group of 30-something Black women as they navigate the ups and downs of life together while striving to take the world by storm.

The show's first official trailer released on Thursday opens with Ella asking the ladies while lounging at an indoor pool, "Am I in a state? … I mean, are Black women in a state?" Renee then notes, "Well, I'm trying to be in a state of relaxation and you're killing my vibe."

Several shots of the group living it up in the city and strutting around in fabulous clothing hit the screen. The clip also shows the ladies providing each other with encouragement. Ella, at one point, says over drinks with Renee, "Anyone who has ever stood on the precipice of world domination has felt fear. Fear is good. Fear is fuel."

As for the hardships, Whitney opens up about how she has "experienced so little" in her love life as Renee prepares "to be divorced" soon. However, at the show's core, the bunch chooses to make the most of their life together. "This weekend I am a Black girl gone wild," Sondi says. "And I will do anything I want. Anything!"

The series is created by Leigh Davenport, who executive produces along with showrunner Yvette Lee Bowser, who created Living Single. Run the World builds upon Starz's #TakeTheLead initiative, which centers on the network's commitment to creating programming that features women and underrepresented audiences.

Shortly after the teaser trailer dropped last December, West posted about how excited she was for fans to see the series.

"Uprooting my family to NY during a pandemic was all worth it! 🌎," the Greek alum, 34, captioned the teaser clip. "Head up, eyes on the prize, world domination. Run The World, coming soon to STARZ! 💫."

Run the World premieres across all Starz platforms on May 16 at 8:30 p.m. ET. In the meantime, check out the show's first trailer in the video above!