“Strange World” landed with a thud this past weekend — its underwhelming $19 million gross contributed to the worst Thanksgiving in box office history. But those who ventured to see Disney’s latest animated feature might have a different onomatopoeia on their minds: Splat, as in the sci-fi adventure’s mischievous scene-stealer. The blue blob comes off as a cross between The Magic Carpet from “Aladdin” and Stitch from “Lilo & Stitch,” with a little Mickey Mouse thrown in as well. It’s also the film’s most complex character, given that it’s faceless, can’t talk, and communicates with the aid of its seven tentacles.

Also, director Don Hall was adamant that Splat couldn’t shape shift. For the animators, it was like playing charades with balloon animals. “I was hopeful that it would be a fun, pantomime character, but they took it to a whole other level,” Hall told IndieWire.

Splat makes a great entrance, slapping teenager Ethan (Jaboukie Young-White) in a dark cave after the two characters antagonize one another. But they soon become fast friends, with the blue blob helping Ethan’s family of explorers fight off the giant, tentacled Reapers so they can solve their energy crisis and find their way back home.

Interestingly, for a movie about family legacy, Splat serves as a symbol of Disney’s own animation legacy, combining the best of both hand-drawn and digital tech, arriving on the eve of the studio’s 100th anniversary in 2023.

“There’s something so fun in pulling out the extra detail and typical things you’d see in a character and just concentrating on shapes, and trying to take that 2D sensibility of pencil drawings and capture that in 3D,” said animation supervisor Louis Jones.

Indeed, Splat began as a pencil test by legendary 2D animator Eric Goldberg, best known for his work on the “Aladdin” Genie voiced by Robin Williams. Goldberg explored both Splat’s charm and destructive side. “It was very, very funny,” added Hall. “Eric was able to iterate very quickly in 2D before the rigs were built and gauge what I want. He asked if I wanted Splat to stretch that far, and I told him, ‘Yeah, I do.’” 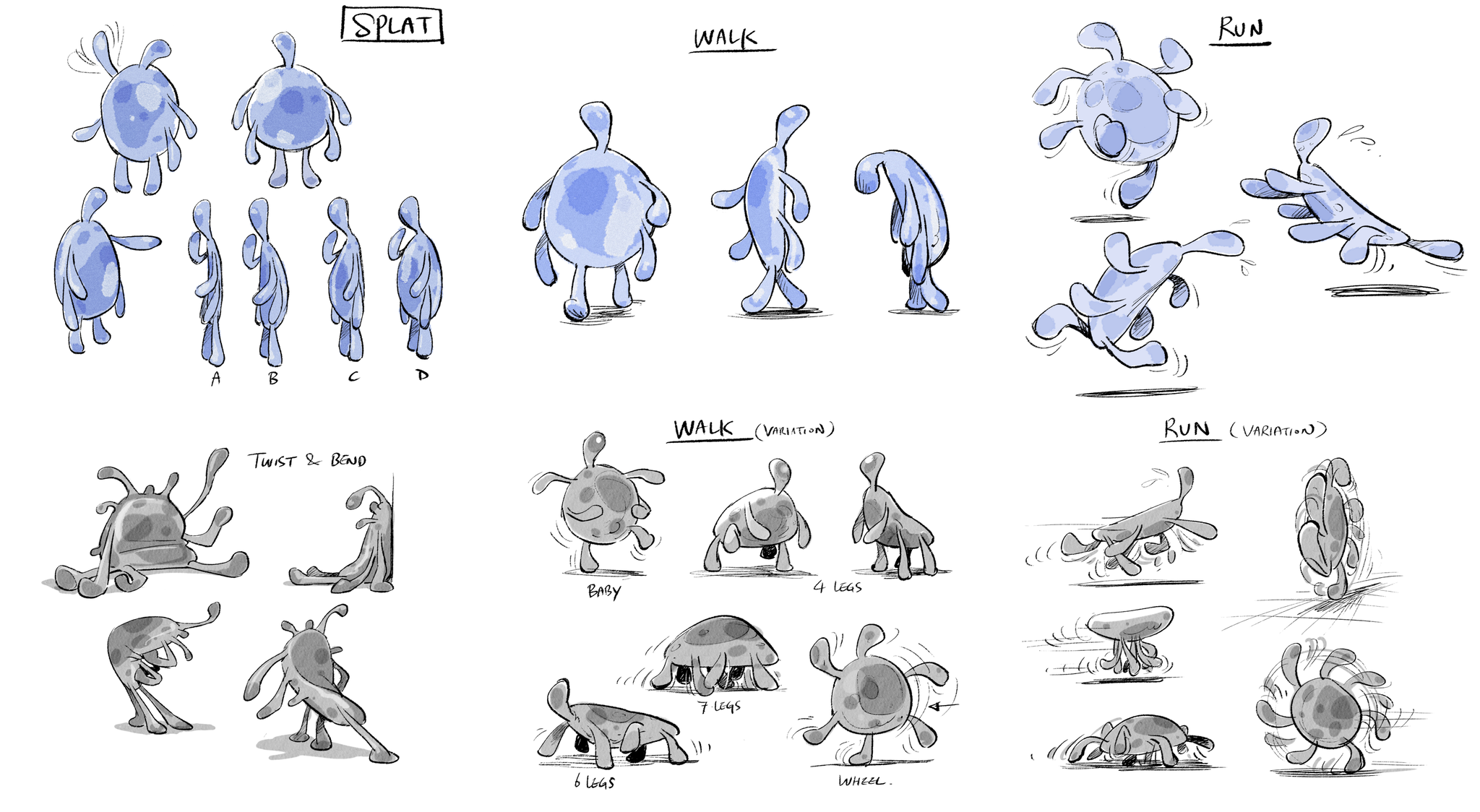 When they first opened Splat up in the computer, however, it was merely a circle with seven equally dispersed limbs. There was no specificity or direction. It was almost a blank slate for Jones and the animators to make it recognizable and to provide emotional context. “We landed on some poses and combinations that became identifiable,” Jones said. “But, even with that, depending on what situation we found ourselves in, you could throw that shape completely out the door and find something new.”

Splat required very complex, hybrid rigging for each limb — usable as both hand and foot, which are usually separate because of different functionality. “We also needed it to work the limbs as standard tentacles from tip to base, and be able to shape and extend flexibly around the circumference of the body,” Jones continued. That allowed them to combine limbs in an area for walking on four legs. In addition, the body had ways of folding vertically or horizontally, and shaping the outer silhouette through multiple controls along the outer edge.

“The riggers [also] developed a mechanism inside of the body, which made it like a pillow inside of a pillow case,” Jones said. “The outside was stable but the spine and inner workings could rotate freely. This enabled them to cartwheel the character around and end up in an upside down orientation. They could then rotate the internal mechanism to realign properly.”

Among the highlights is a shot where Splat moves its tentacles around to imitate the airship with little propeller whips. But trying to give a thumbs up during a chase with the Reapers proved difficult. The animators couldn’t hit the pose they drew in the storyboards, forgetting the character had no fingers. The answer came during another scene when Splat plays a board game with Ethan, his dad Searcher (Jake Gyllenhaal), and his grandpa Jaeger (Dennis Quaid).

“When Splat has a cutaway moment of presenting a house of cards, the animator merged two tentacles, one behind the other, to give the impression of a thumb,” Jones said. “It was so effective that we then extended it into the idea of the thumbs up for that scene where they’re running from the Reapers. It worked so well, a couple more thumbs up were added.”