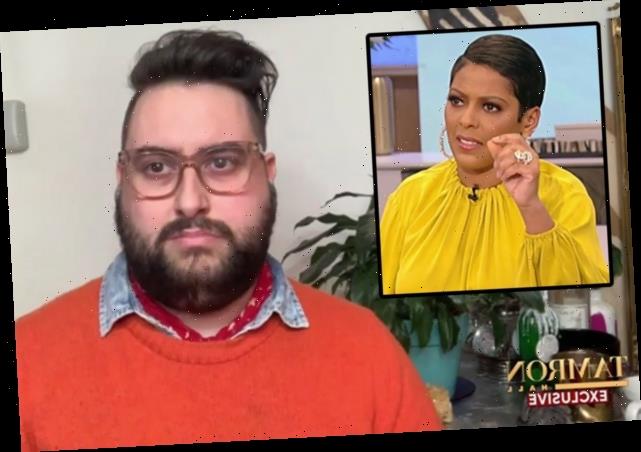 For the first time since being disqualified from RuPaul’s Drag Race in March 2020, disgraced performer Sherry Pie (the stage name of Joey Gugliemelli) sat down for a live televised interview on Tuesday’s Tamron Hall Show.

Before we jump in, here’s some background: Gugliemelli competed in the 12th season of VH1’s popular reality competition series, but a series of sexual misconduct allegations were brought against him just hours before his first episode was set to air, prompting producers to edit him out of the season and disqualify him from the competition. Up to a dozen men have now come forward with claims that Gugliemelli — posing as a fake casting director named Allison Mossie — tricked them into sending money and degrading photographs under the guise of being considered for roles on stage and screen.

Hall began Tuesday’s episode by addressing the social media backlash she’s been receiving for planning this conversation. “The very idea that I’d have Sherry Pie on … was seen by some as giving away my platform,” Hall said to the camera. “I’ve been a reporter for 30 years. I’ve interviewed rapists, I’ve interviewed murderers, I remember interviewing a woman in prison who murdered a child she was trusted to care for. It’s not giving away your platform. It’s called an interview, and people who do bad things are interviewed. R. Kelly comes to mind. That’s just one person I’m thinking who was recently interviewed on multiple platforms and shared all over social media.”

After insisting that she doesn’t give “free passes,” Hall welcomed Gugliemelli into the studio remotely.

“I first want to say that there are no ‘allegations,’” Gugliemelli began. “I admit to my wrongdoings and horrible behavior. I don’t know if … more [victims] will come forward. I’m here to apologize, and I want to make that very clear. I understand now, in lieu of this year, how much pain I’ve caused. I just want to let the victims know, and everyone else know, that I am so sorry. I can’t even begin to imagine the pain and the trauma that I’ve caused. That’s really all I have to say.” (And, truly, he didn’t have much else to say.)

Gugliemelli explained that he’s been “doing cognitive behavioral therapy” ever since his disqualification and has been in contact with three of his victims. “Two of them I still speak to,” he said. “One of them asked me to no longer contact them, and I totally understand that.” Gugliemelli explained that some of his victims were very close friends, and that he “wanted to be able to keep them around and keep them close.”

As for potential criminal charges, Gugliemelli is “prepared to take any responsibility,” though he’s only been contacted by authorities for a welfare check thus far.

Towards the end of the end of the interview, Gugliemelli revealed that he was diagnosed with borderline personality disorder around the time of his disqualification, adding, “I don’t blame my mental illness for anything I’ve done.” He also made vague allusions to his childhood, which included a “deplorable” father and a stepfather with whom he still has a bad relationship.

Official video of the less-than-illuminating interview will be added when it becomes available. In the meantime, drop a comment with your thoughts on Hall and Gugliemelli’s interview below. Was this really necessary?