It starts with a legend: many centuries ago, a seemingly regular man was gifted with a set of 10 magical rings (origins: unknown) that allowed him to tap into a power beyond all human comprehension. For nearly a thousand years, this gifted man (played by Tony Leung, one of the world’s most gifted men) used the rings to gather the wealth and influence he desired, plus an army of decidedly meat-headed meanies who lived to carry out his wishes. But by the power of love — or at least, the necessary exposition such a love story brings with it — the man was temporarily freed from his nefarious activities, until old enemies returned and pushed him to once again tap into both the rings and the bad attitude they inspired in him.

Such is where Destin Daniel Cretton’s alternately fresh and convoluted Marvel Cinematic Universe debut, “Shang-Chi and the Legend of the Ten Rings,” begins, and with a cute kid being told the story of a money-mad bad guy who changed (kind of) to make the world a better place (sort of). No wonder young Shang-Chi is so conflicted: his literal origin story is messy. Thankfully, Cretton zips past this awkward (yet necessary) opening to bring us into Shang-Chi’s (or “Shaun,” as he’s gone by since he slipped into America and attempted to assimilate) current world, which is a far cry from any fairy tale involving magic, mystery, and mean dads.

Shang Chi is played with the appropriate mix of bluster and heart by Simu Liu, a former stuntman who positively nails the awe-inspiring action sequences in the film, yet still manages to feel like the kind of dude who could slip into regular society without arising much suspicion. When we first meet Shang-Chi, he’s well-aware of his odd legacy (he was, of course, the kiddo being told the story of the guy with the rings, who happens to be his dear old dad) and eager to hide away from it. He’s spent the last decade scrapping by in San Francisco, working blue-collar jobs, living in a neat but small garage apartment, and spending time with his witty best pal Katy (Awkwafina). If you’ve never seen a film about special people with hidden abilities and shocking backstories, he’s the last person you’d expect to be descended from a thousand-year-old kind-of bad guy who drove the kiddo to the brink of sanity after training him to be an assassin during his tween years. That old story!

But such is the power of Cretton’s film, one rife with tropes and archetypes and familiar beats that, more often than not, is wildly entertaining and a wholly energizing entry into the cookie-cutter world of the MCU. Shang-Chi might want to hide from who he really is, but the real world (read: the world of superheroes and magical rings and universe-splitting villains, the world he lives in) is not satisfied with such basic desires. Shang-Chi already knows something is amiss when a bunch of wacky bad guys attack him and Katy on a bus — how wacky? one of them is known as Razor Fist, and his fist is indeed a razor. He’s forced to defend himself in ways not exactly befitting your friendly local valet guy.

Bolstered by the awe-inspiring fight choreography of recently deceased second unit director and bonafide stunt action badass Brad Allan (the film is dedicated to Allan, who passed away earlier this month), “Shang-Chi and the Legend of the Ten Rings” doesn’t just boast the best action of the MCU, it manages to do it with two (two!) eye-popping action sequences that unspool before the film’s first act is over. Infused with the grace of martial arts, the raw power of a star who actually practices his own stunts, and the kind of cogent sequences that will surely make audiences marvel at knowing what the hell is going on at any given minute (apparently, a major ask in the world of the MCU), “Shang-Chi” may be built on familiar lines, but in the moments when it’s allowed to be its own film, it’s a vastly different (and vastly superior) film compared to its predecessors.

It is, however, still on the hook to fit into many of the same boxes. After it becomes clear that Shang-Chi is a) not a regular guy and b) bound for a major face-off with his conflicted dad, the hero-in-the-making and his BFF head off to Macau to try to put the pieces together. It will be somewhat hard, mostly because the film’s middle sags with exposition and backstory, as its screenwriters attempt to maneuver around a few finicky problems. Chief among them is that the film likely would have fared better had it been split into two features: a more grounded origin story that plays up the charm and excitement on offer during its first twenty minutes and a bombastic film dedicated to the flexing of Shang-Chi’s prodigious muscles. But this is an MCU origin story, and that’s a subset of the series that leaves little wiggle room. 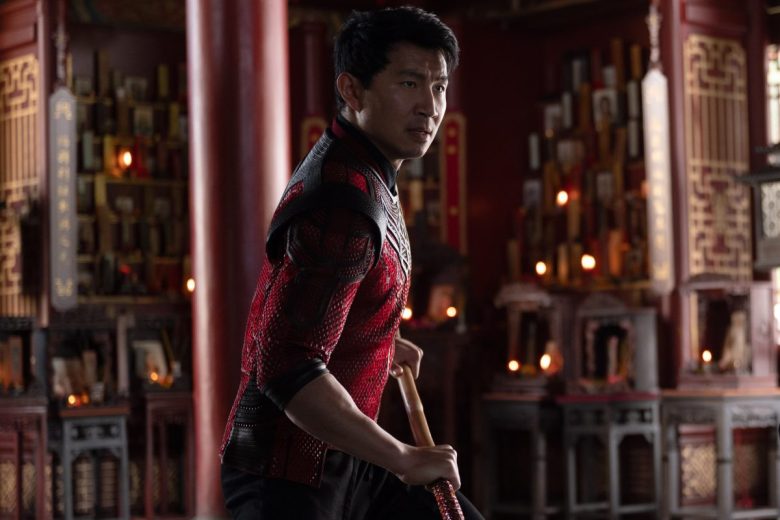 Once landed in Macau, Shang-Chi (who, during a very funny bit on the plane ride there, manages to dispel a variety of lies he’s long fed Katy, including his actual name) and Katy soon find themselves plunged into an underground fighting ring, that just so happens to be run by Shang-Chi’s righteously pissed little sister Xialing (a delightful Meng’er Zhang in her first role). Both Shang-Chi and Xialing have fled the Lil’ House o’ Assasins run by heartbroken daddy Wenwu, and it seems that he’s eager to bring the entire clan back together ASAP. And we mean the entire clan, including their dead mom Jiang Li (played in copious flashbacks by the riveting Fala Chen), who he is convinced is calling out to him from behind a mystical wall.

Sounds like a lot? It is, and that’s before the mystical wall — located in Ta Lo, the magical hidden village from which Jiang Li hails — and its loaded backstory are revealed. Ta Lo’s residents (who, if a lovely, quite long bit of storytelling  leads us to believe, might actually be aliens?) have spent centuries protecting their secretive little pocket of heaven, training up their young ones (like Jiang Li, and her older sister, played by Michelle Yeoh) to be fierce warriors, all in the expectation that they will have to fight the evil that they (and their dragon, coined “The Great Protector”) once managed to lock up behind it. That’s the evil that’s calling for Wenwu — or is it? — and his mad quest to open it up, destroying Ta Lo, inevitably puts him and his two heartbroken kids on different sides of a fraught fight.

While Shang-Chi’s battle between who he is and who he wants to be, who can protect and who he can’t, and what it all means in the emotional milieu of his family sounds like standard-issue superhero stuff, Liu infuses these struggles with a real believability and charm. It’s only bolstered by the addition of Katy (Awkwafina, funny as ever, but ably handling a character with her own internal struggles) and Xialing (who will make you wonder why the heck a girl can’t wield the 10 rings, or at least why the siblings can’t split their birthright).

Less easy to swallow are the many issues inherent to Wenwu — introduced as an all-star level villain who literally spent entire centuries screwing with the world for his own gain before the love of a good woman inspired him to settle down — which are effectively papered over through casting (again, Tony Leung!), rather than insightful writing. Blame the demands of the MCU and its origin stories: there’s got to be friction (even if it doesn’t always make sense), and it’s sure as hell got to lead to a no-holds-barred battle royale that has both emotional and physical pain on the line. There are only 10 rings, and only one man can wield them. You see where this is going.

Still, there are surprises throughout the film, and while Cretton can’t always balance the comedy (the appearance of an old MCU stand-by, played for laughs) and the drama (Wenwu’s grief, the required references to the so-called “blip”), the moments when they do merge are joyous. So too is the world-building, particularly in the gritty underbelly of Macau (can we get some extended scenes from Xialing’s wild fight club?) and the lush majesty of Tao Lo (which is teeming with adorable magical animals and some rich history). The emotion may be messy, but it’s also real: of course Shang-Chi and Xialing would feel the way they do; Wenwu’s reaction to his deep grief is the most realistic part of his character.

All of these parts converge for a final battle that, much like the film it exists inside, tips between genuinely wonderful hand-to-hand combat and busy CGI; its more grounded elements and the requisite “movie magic” are constantly at odds here, perhaps more than any other MCU film since “Iron Man 3.” It sets up plenty of predictable parts to come, but the pleasures of “Shang-Chi and the Legend of the Ten Rings” when i’s allowed to be its own thing are deep. As the MCU only continues to expand, Cretton’s film should be pointed to as a sterling example of what’s possible when a hero is allowed to be his own man, on his own terms. The rings? They’re just a prop.

Disney will release “Shang-Chi and the Legend of the Ten Rings” in theaters on Friday, September 3.