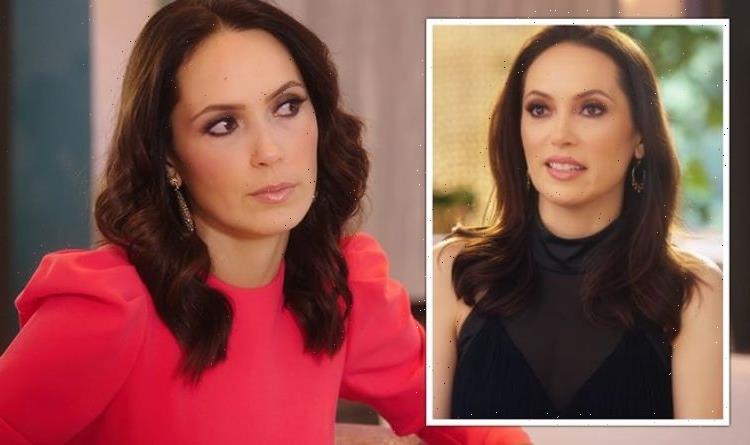 Selling Sunset season four will air on Netflix and viewers are looking forward to seeing the agents at The Oppenheim Group back in action. Season three aired back in August 2020, and the reality series was renewed for two more instalments. Davina Potratz spoke exclusively to Express.co.uk revealing the latest news about season four.

Selling Sunset is a popular reality series and it follows staff at The Oppenheim Group – a luxury real estate firm in LA.

Each season gives viewers insight into the personal and professional lives of the agents, and there is always plenty of drama.

Three seasons have aired so far, all made up of eight episodes, and it is hoped season four will take the same format.

The coronavirus pandemic has left production up in the air and fans have been wondering when the new outing will arrive.

No official release date has been given yet, but it will hopefully be out before the end of 2021.

However, when Davina spoke to Express.co.uk at the end of July 2021, she said they were “not even close” to finishing filming.

She said: “Currently we are on a short break but not even close to done filming, we have a few more months to go.”

The exhausting filming schedule means the fourth season may be out in time for Christmas or the New Year.

As for what to expect from the new series, she promises “it will be very entertaining.”

She said: “What I can tease is that we have bigger, better houses, new cast members, changing dynamics, avant-garde fashion, more babies and next-level drama that we know you love.”

Davina is known for having some of the quirkiest clients on the series, including Adnan Sen who owned the $75million house.

She confirmed Adnan was still one of her clients, saying: “Adnan is a very intelligent, successful and kind client.

“His background is Turkish and Danish and he is extremely hospitable. His staff made a buffet of food for our camera crew when we were filming.

“Of course he can be scary, I think many people can be, but I also think that he might have hammed it up for cameras.

“I did not expect him to be as tough as he was in the scenes that you saw so, I was kind of laughing at him as in an ‘are you serious right now or is this a joke’ kind of way because I know him to be quite warm.

“Yes, he has been a great client, easy to work with, and makes fast decisions because he is so experienced.”

She said she did not regret accepting such a huge listing and it would have been a bigger risk to let the opportunity pass.

Since season three aired a lot has happened for the agents, including the birth of Christine Quinn’s baby with husband Christian Richard.

Davina said: “I’ve seen Christine and her baby boy is so cute. Relationships with the rest of the group have been great, I am very close to Maya and also love the new cast members.”

Vanessa is a Mexican-American novela star and Emma Hernan is a former Sports Illustrated model.

Fans will be keen to find out what they both bring to the team when the new season airs.

Since the third season aired, there has been another update regarding Chrishell Stause and her relationships.

She recently confirmed rumours that she was dating her boss, Jason Oppenheim.