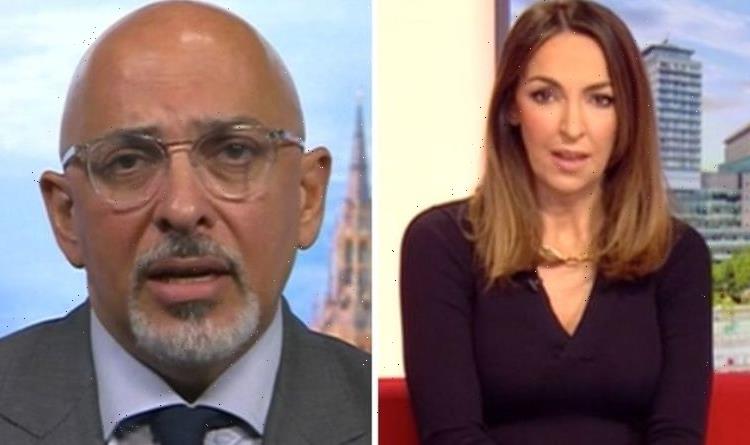 BBC Breakfast viewers have hit out over presenter Sally Nugent’s interview with Education Secretary Nadhim Zahawi on Monday’s instalment of the news programme. During the interview, Nugent asked Zahawi about COVID-19 regulations in secondary schools as well as how the Government will deal with staff shortages. However, many viewers were left fuming at Nugent for “letting him off and not pressing him for answers”.

During the interview, Nugent told the Education Secretary: “Some schools go back tomorrow, and some go back within the next couple of days you’re not giving people very much time to get organised are you?”

However, Zahawi replied: “To the contrary, one of the things we did on testing was very early on last year.

“I decided to have the test kits for schools and headteachers have been planning for the first week of testing because we have been communicating with them from the end of last year.

“It may have been something which has just broken in the news for you at the BBC, but actually, we’ve been working with school heads on the testing programme from this first week from the end of last year.”

Nugent pressed the minister over staff shortages and asked whether he was confident that testing on-site could still go ahead.

“We are confident, we will work with supply agencies and we will have a better handle at the end of the week as to who has come forward to join that effort to make sure we have enough teachers in the classroom,” Zahawi explained.

The Education Secretary also said secondary school children wearing masks should not be in place “a day longer than we need it”.

Under new rules, people are allowed to end their isolation if they test negative on days six and seven but have to remain in isolation until day 10 if they are unable to take a test.

It is understood the Government will soon announce plans to prioritise key workers such as nurses, lorry drivers and Government officials for Lateral Flow Devices

Prime Minister Boris Johnson is continuing to monitor data on hospitalisations as the after-effects of Christmas gatherings and record case numbers begin to put the NHS under strain.

Many of those watching at home, took to Twitter to hit out at Nugent for not pushing Zahawi over some of his answers.

@busy1971 fumed: “This is the easiest interview he will have had. Sally is letting him off with everything and not pressing him for answers. Another #bbcbreakfast inadequate interview.”

@Mickorua1 added: “Three questions in from Sally Nugent on #bbcbreakfast to @nadhimzahawi and he’s allowed to talk absolute b******p to said questions. Is any BBC interviewer capable of asking serious questioning questions of any b****y Tory Minister? I doubt it, they are no @adilray.”

Tony Hobson commented: “Nugent is allowing Zahawi to get all his talking points in and letting him get away without answering the question she had asked. As per usual.

“What would you say to the headteacher? I would like to thank all teachers, blah blah, but no answer. Quick move on to the next cue! #bbcbreakfast.”

Joanne added: “He’s working through a list of things he wanted to mention, regardless of the question #BBCBreakfast.”

However, some viewers praised the BBC Breakfast presenter for probing the minister on students’ and teachers’ welfare if coronavirus restrictions are ramped up again in secondary schools.

Wendy King directed tweeted Nugent saying: “I really wouldn’t want to be a teacher right now. They are doing an amazing job though and got to praise the Head and staff where son goes. Communicating above and beyond the hours required.”

Den added: “A straight answer would be so refreshing! Why do all ministers feel the need to answer quoting endless usually irrelevant numbers #NadhimSahawi? If the goal is to make us feel drained fatigued and overloaded, congratulations you’ve succeeded #bbcbreakfast.”

BBC Breakfast continues weekdays from 6am on BBC One.