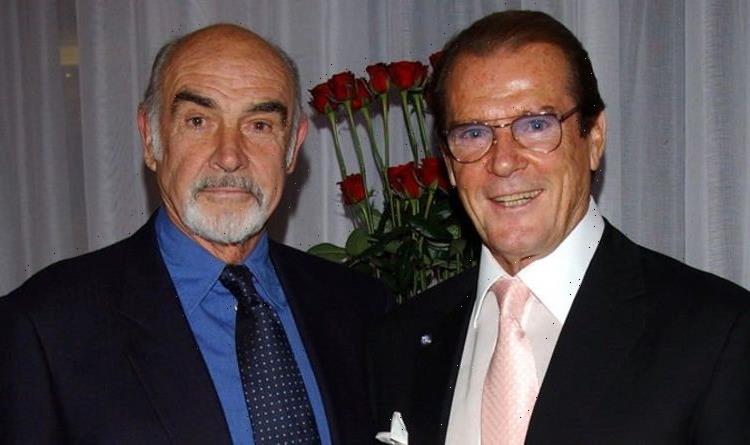 Daniel’s Craig’s final outing as the British spy in No Time To Die had to contend with on-set accidents, injuries and a global pandemic. But back in 1983, the latest Bond movie Octopussy actually had to battle something even more extraordinary – a rival Bond release, Never Say Never Again, starring the original 007. Before his death, Moore spoke of the rivalry between the two actors and their films, while the public made their own decision clear. SCROLL DOWN TO WATCH ROGER MOORE’S 1983 INTERVIEW ABOUT THE RIVALRY

Moore was actually preparing to bow out after 1981’s For Your Eyes Only. His original three-film contract had actually expired after The Spy Who Loved Me, so he renegotiated each time.

Producer Cubby Broccoli was in the process of signing up James Brolin to take over the role in the next film in the main EON franchise, Octopussy, when producer Jack Shwartzman signed up Connery to return in a rival production, to be released the same year.

Never Say Never Again also had a considerably higher budget, at $36million to Octopussy’s $27million. So how did Moore feel about Connery returning to challenge him as Bond?

Moore revealed in an interview that year with NBC that the two actors had divvied up the films between them and that the process had also given him the opportunity to push for more money.

He said: “Of course, Jack Schwartzman came to me and asked me if I wanted to do that, or did I want to do this (Octopussy). So, yes, of course, that gave me a certain amount of leverage. I said to Sean, ‘Which one do you want to do?’ and he didn’t want to do the one with Cubby, so I’m here and he’s there.”

Connery and Broccoli had famously fallen out and refused to be on set at the same during the filming of 1971’s Diamonds Are Forever.

Asked how it was possible for audiences to go and see two different Bonds in the same year, Moore made the point that you could go to London and see two Hamlets or Midsummer Night’s Dreams playing.

Asked which his version of Bond was, Moore quickly quipped, “Hamlet.”

Ever the suave charmer, Moore later spoke of the situation in his autobiography, My Word Is My Bond.

He said: “There was no animosity between Sean and me. We didn’t react to the press speculation that we had become competitors in the part.  In fact, we often had dinner together and compared notes about how much we’d each shot and how our respective producers were trying to kill us with all the action scenes they expected us to do.”

The press tried to pit the two against each other, and it seemed to be the ultimate public choice between Connery’s grittier approach and Moore’s more light-hearted romps.

Moore insisted the two actors were rivals: “No more than two jockeys who are going to be paid anyway for running the race. But it would be nice if you won because you’d get the extra bonus. But really, no more than that. Sean and I are friends.”

He also responded to the popular rumour that he had been considered for Bond before Connery was even cast in 1962’s Dr No.

Moore said: “That’s what they told me, at least. They also said I was (Bond author) Ian Fleming’s first choice. But Ian Fleming didn’t know me from sh**. He wanted Cary Grant or David Niven.”

The rivalry between the two films rumbled on as Barbara Carrera declined the main role of Octopussy because she wanted to act alongside Connery. She went on to appear as SPECTRE agent Fatima Blush.

Octopussy was released in June with Never Say Never Again following in October. All eyes were on the final box office totals as the definitive answer to which Bond the public preferred.

Moore and Connery, of course, simply laughed all the way to the band – and eternal fame.

They remained close friends throughout their lives, with the Scot pictured giving his English ‘rival’ a huge hug at the party to celebrate Moore’s 2003 knighthood.

The question of who is the best Bond rumbles on to this day and remains, as it should, simply a matter of personal preference.