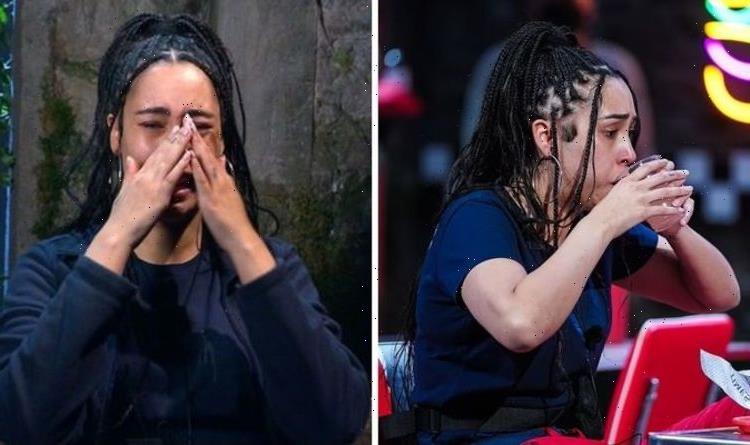 I’m A Celebrity … Get Me Out of Here made its highly anticipated return to ITV on Monday with its 14th season. Despite this, viewers were left disappointed and took to Twitter to blast the show after she lost her first trial to Emmerdale’s Danny Miller.

On the latest episode of the competition, Radio 1Xtra DJ Snoochie Shy went head to head with Danny Miller for the first bushtucker trial.

In an aim to win a meal for the respective camps, the two were forced to eat foods including cow’s teats, sheep’s feet and pig’s brain.

Both Danny and Snoochie played well, however things took a turn after they completed the five rounds and had to settle with a tie break.

Danny downed the glass of fermented tofu the fastest and won the challenge, but fans slammed the trial and claimed Snoochie was “robbed,” after she left in tears.

After the challenge, Snoochie became overcome with tears at the thought of telling her campmates she wasn’t able to win them a meal.

The DJ said: “I was kind of dreading coming back and telling them, ‘I’m sorry I didn’t get you food today’. I just kept apologising and everyone was like, ‘You don’t need to apologise’ but I just feel really guilty.”

Her fans took to Twitter to express their outrage stating it was unfair she returned empty-handed, despite completing the five rounds.

Troy4783 wrote: “Danny stole that tbh, Snoochie did so much better than him on the whole trial.”

Rkiveari was unimpressed and tweeted: “I’m not being funny but why make them both do all that and then have it down to who can down a drink quicker? Feel bad for Snoochie I’m ngl.”

Harriet11717067 was in disbelief at the results: “Nah no way Danny won that, he was being sick the whole time and Snoochie ate so much more than him without throwing up.”

96ellieb added: “Ahhh how did Snoochie eat all that and get nothing!!”

While Evangelineprin fumed: “No I’m sorry but what the f**k is this! Snoochie destroyed that trial and gets f**k all just cause she couldn’t down a drink. F**k off with that bs.”

Back in the campsite, Snoochie was visibly upset, which prompted former BBC Breakfast presenter Louisa Minchin to console her.

After she reassured the 29-year-old, Louisa shared her thoughts and stated: “She was emotional and I completely understand that, she thinks she’s let us down even though we don’t think she has let us down.”

They were both later joined by singer Frankie Bridge, who also comforted and reassured Snoochie.

While the women hugged it out, viewers got a glimpse into the other campsite where Danny was celebrating his controversial victory.

Football legend David Ginola was expressing his gratitude to Danny and detailed how proud he was for winning the bushtucker trial.

He was also described as “fearless” by former Strictly judge Arlene Phillips.

Later on, the campsite received their winning meal which was Pike, much to Danny’s surprise.

The actor explained: “Much to my dismay it was fish and not only fish but it was pike which you could probably catch in the Manchester canal.”

I’m A Celebrity Get Me Out of Here continues every day on ITV at 9pm.