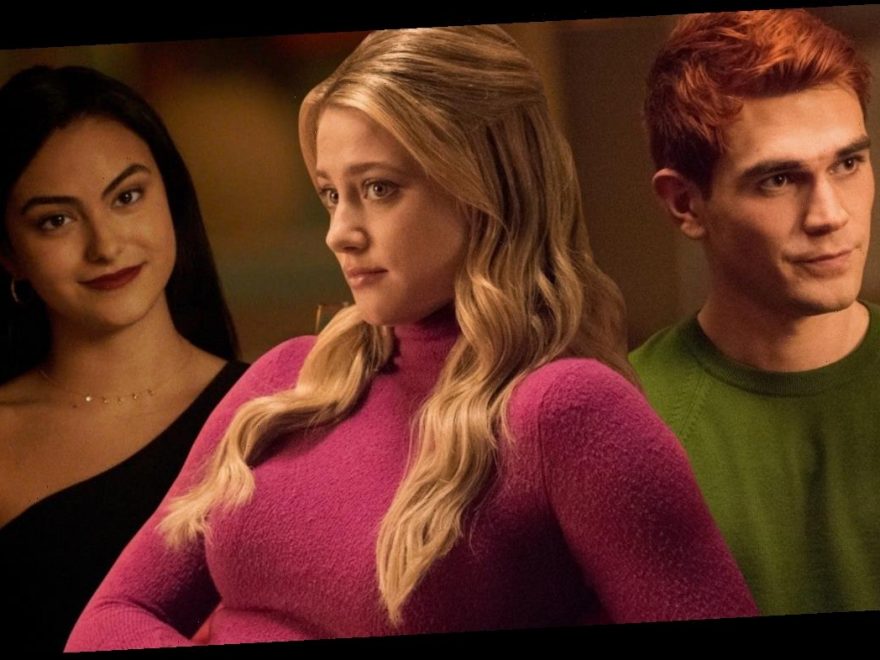 It’s astounding. Time is fleeting. And madness takes its toll… So did Riverdale just give us a time jump? More like a time warp!

OK, fine. This isn’t The Rocky Horror Picture Show, but we certainly felt like Janet (dammit!) as we were wandering around town with Archie and trying to understand what has happened to Riverdaleover the past seven years.

Although we discovered many new and horrifying secrets about our favorite characters, (Betty was kidnapped… again?!) we’re still trying to figure out which Riverdalian had the worst time over the time jump, who our new series narrator will be, and when the identity of Toni’s baby daddy will be revealed.

Luckily for the Riverdale fandom, we have answers to all of these questions, plus so much more!

To get the inside scoop on what’s coming up for your favorite couples, ET jumped to the left, stepped to the right and called up creator and executive producer Roberto Aguirre-Sacasa for our traditional Riverdaleromance rundown! 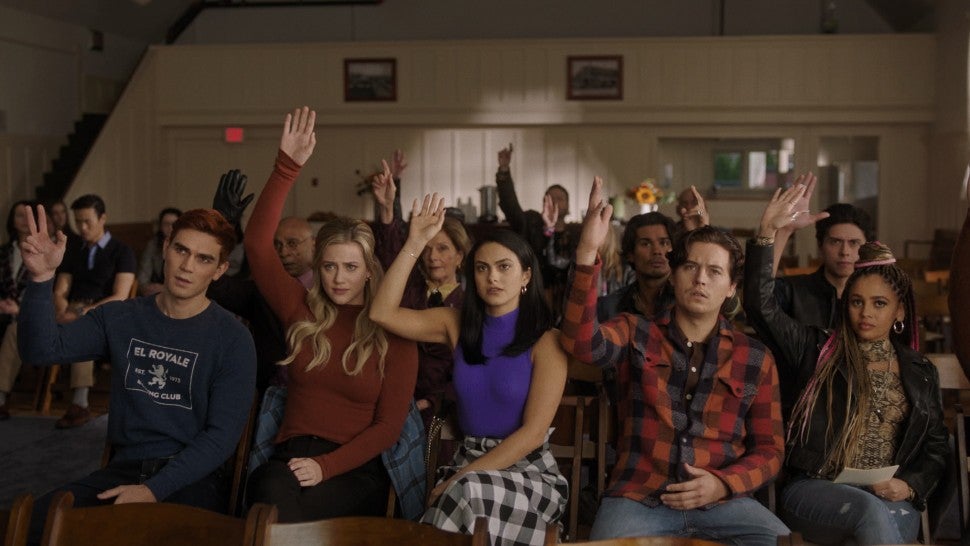 ET: Goodness gracious, Roberto! None of these characters have had an easy seven years and each person seems to have gone through some kind of a trauma. In your opinion, which character has had the toughest time over the last seven years?

Roberto Aguirre-Sacasa: It’s funny you articulated the season’s theme even before we really knew it, Leanne. As we were working on season 5, it became clear that this was a season where all of the characters were wrestling with different kinds of trauma. You know, I’ll be honest with you, as we unpack the seven years, which we’ll do throughout the season — they’re all pretty bad. Like, originally, Jughead’s was going to be the least traumatizing, but as we accumulated details, it’s now going to be, kind of, the most horrific. They’re all pretty bad and they’re all pretty dark as we will discover throughout the season. There’s no one who got spared in terms of the trauma quotient.

Who is the series narrator after the time jump? We’ve always had it be Jughead, but it seems like Toni is now the most knowledgeable about what’s going on with the town. Are we going to see characters trade off?

You know what? Actually, [the narrator] is one convention that continues on Riverdale. It’s not in episode four because the characters are disjointed, but once they’re brought together, we find Jughead narrating again and there is comfort in that for sure.

Nothing bonds a Riverdale couple more than trauma. As we’ve seen, it’s clear that Archie is going to be dealing with a lot of PTSD from the Army, Veronica was involved in a helicopter accident and Betty was apparently held captive by another crazy sociopath. (Poor Betty!) Of those in this love triangle, whose bond do you think will be the most strengthened moving forward? Betty and Archie or Veronica and Archie?

It’s funny, you know, at the risk of spoiling anything, I’ll say that all of the characters are reaching out and trying to reestablish connections, friendships or relationships in the wake of their traumas. Now after seven years, I think our characters need different things than they needed in high school. 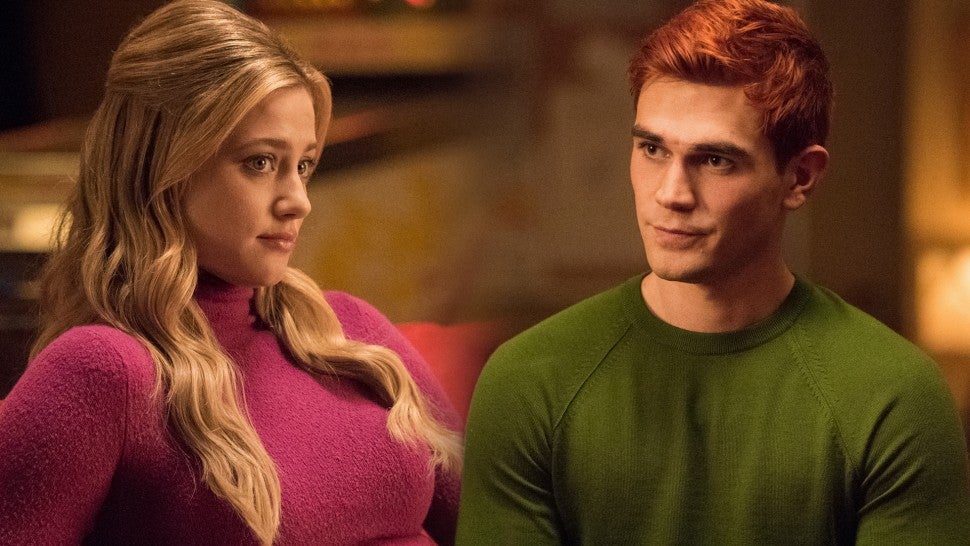 Let’s first talk about our new potential couple, which is Betty and Archie. Even though we saw in the episode that Betty kind of has a guy, she doesn’t really seem interested in him. And KJ Apa recently told me that we do get to see a lot more Betty and Archie scenes in season 5. What can you tease for Barchie?

Yeah, I think you will see a lot more of Archie and Betty. The base that we said we had in the pilot is that Archie and Betty were best friends and I think that’s what’s fueling their reconnection when we regather in Riverdale. And that’s another way of saying that we will see them together and what they share is really deep. Really deep.

No comment. No comment! [Laughs] But they are in a lot of scenes together, that is for sure. 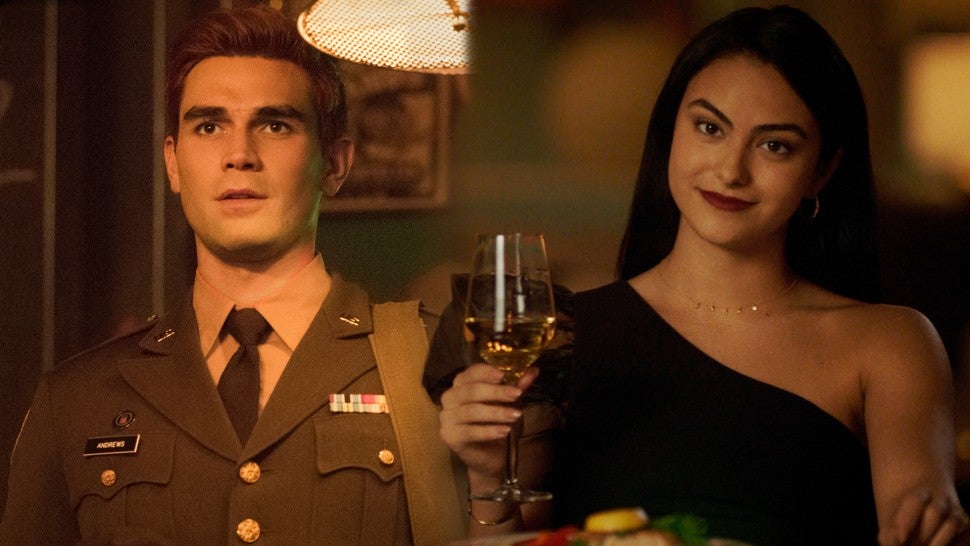 You really did not do the character of Chadwick any favors because you immediately showed that he’s controlling, insecure and basically like a mini Hiram. How are we going to see Veronica connect with her former flame, Archie, now that she’s a (seemingly) unhappily married lady?

You know, I think you’ve hit the nail on the head. Chad is sort of like a mini Hiram and I think we’ll learn why and how Veronica and Chad came together. But, you know, it’s funny, I think Veronica and Archie were really, really strong. Even after their breakup in the prom episode, we see in the graduation episode that they wanted to spend time together and they wanted to spend the night together and be together. I think their attraction, affection, and love for each other is pretty primal, so yeah, those two will also be looking for a way to reconnect. But I will say that Archie will not get back together with Veronica — or even start to think about that — while Veronica is married to someone else. He’s just not going to do that. That’s just not who he is. 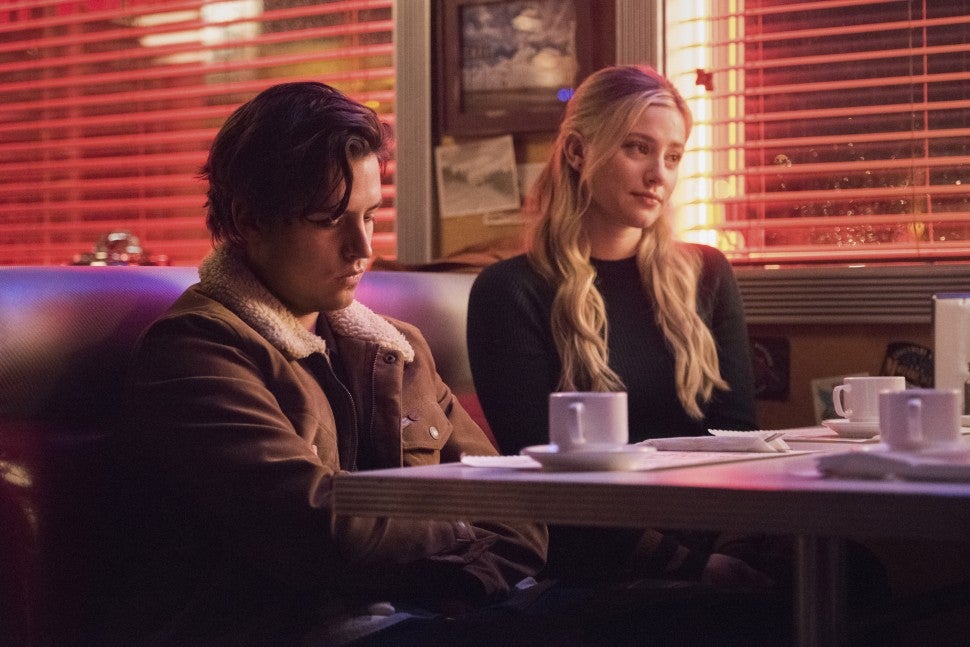 Let’s talk Betty and Jughead. We saw in this week’s episode that both of them have recently had relationships that they don’t seem to be excited about. What’s it like when we get Bughead back together?

I think that the events of that Hedwig kiss and the conversations that Jughead and Betty had — and didn’t have — in the graduation episode [are important]. You know, Jughead said we kind of made the decision to not talk about that and we knew that we were just going to go our separate ways and we didn’t want the pain of that conversation. But so now, I think things are really raw and painful still for Jughead and Betty. I think there are still a lot of unresolved feelings of betrayal and there’s more awkwardness between Betty and Jughead than, say, Archie and Veronica because Archie and Veronica talked about it a little bit more. Jughead and Betty didn’t really. It sort of like tumbled out and they didn’t have that big conversation that Veronica and Archie did for instance. So I think there’s a lot of rebuilding and repairing that would need to happen first. 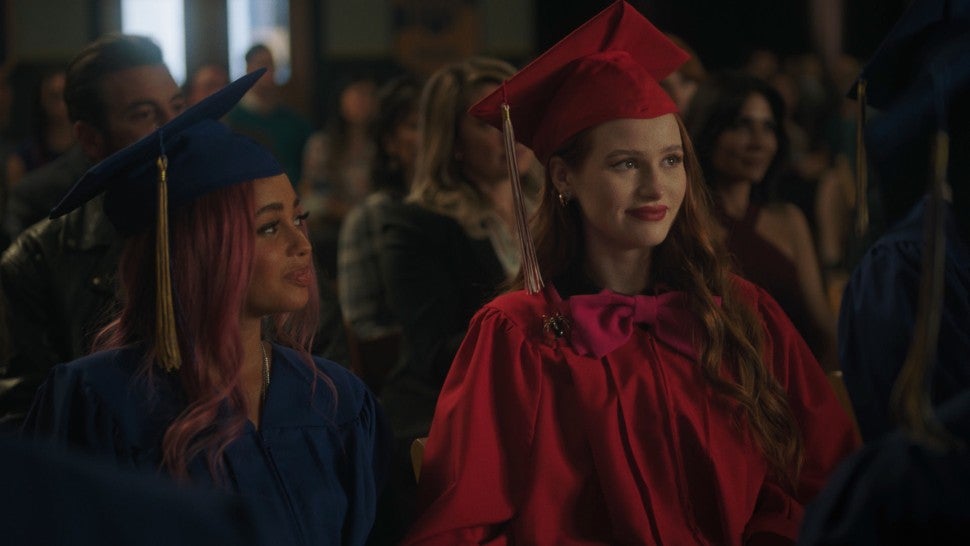 My goodness, we’re seeing that Cherly is the Miss Haversham of Riverdale now….

That’s right! [Laughs] No, she’s the Miss Winchester of Riverdale.

Well, what can we expect for Cheryl and Toni romantically and how long are you going to keep Toni’s baby daddy a secret?

We are going to keep Toni’s baby daddy a secret for a while, but I’ll tell you that I think we reveal the identity in [episode] 508. And I think I can say that up to 508 there is a push and pull between Cheryl and Toni. Both of them want to get back together, but they’re struggling to be in sync about why and the exact moment. And I will say, without spoiling anything, it has been fun writing for Cheryl and Toni as separate entities and not as Choni. It has been fun to break stories for Madelaine and fun to break stories for Vanessa sort of not under the umbrella of Choni, but there is a push and pull that happens. One hundred percent.

Riverdale airs Wednesdays at 8 p.m. ET/PT on The CW.