There is a brutal moment – one of many – in Ricky Gervais' new comedy series where he offers a brutal assessment of a modern life: "There's no advantage to being nice and thoughtful and caring and having integrity," he says. "It's a disadvantage."

Indeed, you don't have to look far across a bleak landscape of depressing headlines and social media noise to realise that his point, despite its genesis in depression, frustration and grief, is a valid one. 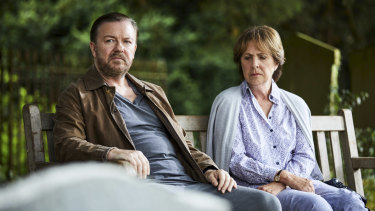 Ricky Gervais and Penelope Wilton in a scene from the Netflix series After Life.Credit:Netflix

After Life (Netflix, on demand) comes to television at a time when genre means much less than it once did. With this show it somehow means even less.

Gervais' presence gives this series the presumption of comedy, but After Life is infinitely more. It's as funny as the best in the comedy genre. But equally it is terribly bleak. There are moments when the darkness is so dark that you can barely breathe.

Gervais plays Tony Johnson, a journalist working on a small town paper who, in the wake of his wife Lisa's death, decides to start calling it like it is: he's brutally honest with everyone around him, from his too-nice-for-his-own-good boss (and brother-in-law) Matt (Tom Basden) to the lazy local postman Pat (Joe Wilkinson).

Tony is a man plainly ill at ease with his world, and in the bittersweet irony in the trail of conversational destruction he leaves in his wake is that he's right: the world around him is pretty much as he calls it.

But as he lurches into despairing disconnection, side-stepping glimpses of something more hopeful in the people he encounters in his daily life, the lesson might be that there is little joy to be found in being right.

Gervais' brand of comedy has always found its strength in discomfort.

Worse, the notion that his new found superpower – honesty – is somehow his salvation is hollow. In fact, Tony's world is unravelling slowly as the house around him subtly falls apart while he depends on a diet of video clips left behind by his wife who, in her wisdom, accurately predicted that he would be ill equipped to survive without her.

Gervais' brand of comedy has always found its strength in discomfort. The Office and Extras are examples of how nudging the audience to the brink of unease works comedically. But After Life is something else again, straddling all of that beautiful discomfort with something profoundly more complex, an exploration of the pivot between life and death.

Even though she survives in video clip form, Tony's wife Lisa (Kerry Godliman) is actually very much alive. She's optimistic and, from the dim reflection of the laptop screen, she's channelling what little time she has left into preparing a survival strategy for the man she plainly adores.

Tony, in contrast, challenges the notion that he's worthy of such adoration. He's alive but at the same time little more than a walking cadaver, a hollow shell whose desire to give up propels him through a series of experiences which are both disturbing and, sometimes, hilarious.

The sweet touch is that salvation must come to Tony, however unwilling he might be. After a handful of episodes it may come at a glacial pace, but there are pinpricks of light which begin to shine, from his father's nurse Emma (Ashley Jensen) to Anne (Penelope Wilton), a woman Tony meets at the graveyard where his wife is buried, his sweet nephew George (Tommy Finnegan) and the local daytime hooker Roxy (Roisin Conaty).