The Reservation Dogs Season 2 closer packed quite an emotional punch, as the group of besties finally made its way to California. But like most other tales from the rez, their trip was not without some serious setbacks.

How did they honor Daniel, what became of Elora and Bear’s friendship and which two musicians made special guest appearances? We break it all down in the recap below.

When the episode begins, Daniel is in class writing the letter Willie Jack acquired last week. He’s looking forward to getting his license, and can’t wait to go to California with the crew. He’s also hoping that Elora might soon like him back. “No one in the world laughs like her,” he writes.

We cut to the present, and the Rez Dogs (plus Jackie) are at the junk yard looking to steal Elora’s car back, only Kenny Boy busts them. He gives them the code for the gate and lets them go, saying they can pay him back when they can, in this life or the next. (You’re aaaaalright, Kenny Boy!)

As the crew heads out on their trip, Bear and Elora seem to have mended fences. The crew jokes about Daniel’s unrequited love for Elora, and decides to toss his letter into the ocean, since the letter is a part of him and he always wanted to make it to California. After that, the world is their oyster. (Even if they have absolutely zero clue what an oyster actually is.) 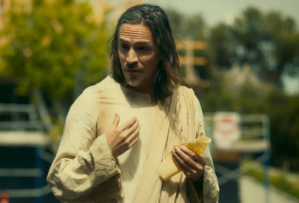 They arrive in Los Angeles and are psyched to have made it, despite the mild disappointment that the Mexican dive they stop at doesn’t have catfish. When Willie Jack goes outside to get cash from the car, it’s gone, along with their snacks and Daniel’s letter. Bear’s dad’s phone is disconnected, so that’s out of the question. Enter White Jesus (played by… Incubus singer Brandon Boyd?!), who tells them guys in suits, either gangsters or Mormons, “gacked it.” Even though the beach is 10 miles away, they let “White Jesus” guide the way.

Jesus brings them to a homeless camp and offers them a place to crash. Reluctantly, they agree to stay, taking shifts through the night to stay safe. Cheese and Elora name-drop saxophonist Tim Cappello, which makes this Lost Boys fan as happy as a clam. (Which again, is not an oyster.) Cheese says Daniel was his hero. “It seemed like he could do anything, you know?’ he tells Elora. He says he feels the same way about her, and if anyone could make it out, it’s her.

Eventually the cops come, so the kids bail. Elora says they don’t want to get abducted by some white lady who likes ranch on her dinner rolls (a callback, of course, to Megan Mullally’s guest-spot). They’re about to collapse until Bear hears the ocean, and finally, they reach the coast. 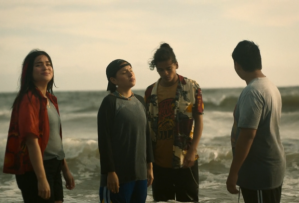 As Bear, Willie Jack and Cheese take their shoes off to run into the water, Elora thinks back to Daniel’s funeral. She hesitates. She doesn’t want to let him go. Bear assures her they’re only letting go of the pain; Daniel would be happy they’re living their lives, and have made it all the way to Cali.

Cheese begins a prayer, reaching out to the “genderless being” above. They always wanted this moment to be significant, he says, before carrying on about The NeverEnding Story (A+ references in this finale, you guys). Cheese tells Daniel he’s his hero, but that he’s mad at him. Willie Jack lost her brother/cousin/friend; Bear lost his best friend and now a piece of him is missing; Elora lost her hope. Through tears, Cheese finishes, and the foursome embraces. “I love you, bitches,” Bear says.

As they stare out into the ocean, Bear says they should go all the way in. Elora says she’s afraid of what’s in there, but Willie Jack says she won’t let her drown. They walk further into the water and join together for another group hug, and when they’re all connected, Daniel is right there, smiling and living vicariously through them. They share more I love yous, but when the hug disbands, it’s just the four of them standing in the sand once again.

As they get out of the water, Bear says he’s not going back to the rez. 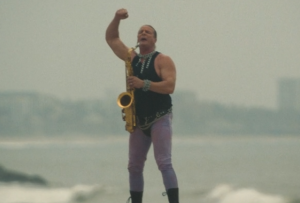 In the episode’s tag, White Jesus is using his metal detector in the sand. As he walks away, Tim Cappello appears (!!!) in the distance. He’s playing his sax and singing that Lost Boys classic “I Still Believe,” arm raised to the sky like the legend he is.

Now it’s your turn. What did you think about the Rez Dogs’ Season 2 closer? Vote in our polls below, then drop some comments.