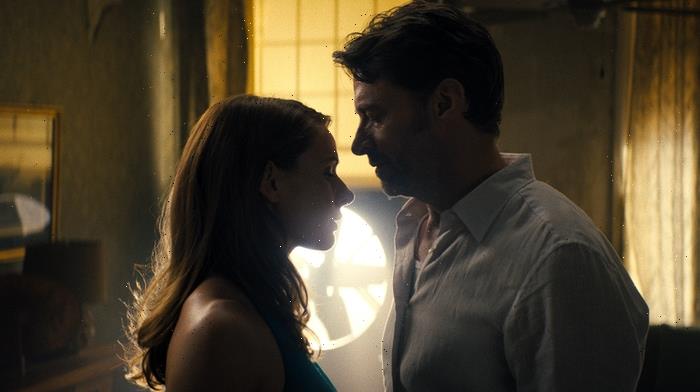 Reminiscence is now in theaters and streaming on HBO Max, and you know what? It’s not half-bad! I wouldn’t go so far as to say it’s a great movie, or even a very good movie. But it’s a well-made original bit of sci-fi noir that takes hard-boiled pulp and blends it with vague futuristic tech. But for all its charms, Reminiscence fails to stick the landing and gives us a rather ho-hum ending that might have you scratching your head. Never fear – I’m here to give you the skinny on what’s going on.

You’re Going on a Journey

Reminiscence is set in a future that sure looks and sounds a lot like the past. While there is plenty of futuristic tech here and there, everyone walks around acting like they’ve just stepped off the pages of a Mickey Spillane paperback. We learn that Florida (and presumably other parts of the country) has been severely flooded, so much so that Miami resembles a swinging, ultra-modern version of Venice, with waterways for streets and boats used as means of transportation. There were also a series of wars, but we don’t learn a whole lot about them (vagueness is the name of the game in Reminiscence).

At some point in the future, a device has been created that can take people’s memories and turn them into 3D hologram projections that basically resemble movies. A subject is sedated and floats in a water tank while their memories – called “reminiscences,” ya know, like the title – are writ large in the air above them. This tech is used for various things – some people like to relive past pleasant memories, some people use it to remember things they’ve forgotten, and even the legal system uses it to help convict criminals.

Nick (Hugh Jackman) and his side-kick/only friend Watts (Thandiwe Newton) operate a business that houses one of these machines, and people stroll in to plop down into Nick’s water tank and remember their past. Business isn’t exactly booming, but Nick has a regular client named Elsa (Angela Sarafyan) who comes in to rewatch old memories of her time with her much older lover (whose face is always obscured in the projections; I wonder why!).

In true noir fashion, a beautiful dame wanders into Nick’s office one day looking for help. This is Mae (Rebecca Ferguson), and Nick is instantly smitten with her. Mae wants help finding her missing keys (sure, whatever!), and Nick obliges. But this isn’t the end of his time with Mae – it’s just the beginning. The two quickly fall for each other and Mae seems like the perfect woman.

And here’s where the movie throws a big twist at us! We suddenly learn that everything we’ve seen so far is actually a memory. Nick is in his machine himself, reliving the past – because in the middle of their great sexy relationship, Mae up and vanished. Watts, who was immediately suspicious of Mae, thinks she merely got bored and left. But Nick is convinced something must’ve happened to her. And so, like a private eye, Nick begins investigating with the hopes of locating his lost love.

What Happened to Mae?

The future is a lot like the present, because the rich are still getting richer and the rest of us are still scraping by. In this flooded world, the wealthy have become known as Barons, and they buy up all the dry land (making them Land Barons, I guess, although they never use this term in the movie which seems like a missed opportunity). One such Baron is the obscenely wealthy and powerful Walter Sylvan (Brett Cullen), a character who is introduced and then quickly dies off-screen. Store this info in the back of your noggin and use the reminiscences machine to recall it later, because it’s important.

During Nick’s investigation, he finds out Mae wasn’t exactly who she said she was. She has a dark past involving drug addiction and other nefarious activities. She also hung out with a creepy drug lord named Saint Joe (Daniel Wu), and Joe’s muscle, a crooked cop named Cyrus (Cliff Curtis). And because everything is connected in stories like this, Nick learns that Elsa – remember her? the woman who kept wanting to remember her trysts with her older lover? – has been murdered. In addition to that, Elsa had a son – and that son was kidnapped by a woman who Nick thinks is Mae.

Nick eventually catches up with Cyrus and the two get into a big fight in a flooded building (I should add this fight looks really cool). Nick manages to overpower Cyrus and hauls him back to his office, where he straps the corrupt cop into the reminiscence machine. Through Cyrus’ memories, Nick finally finds out what happened to Mae.

Cyrus hired Mae to get close to Nick so she could steal Elsa’s recorded memories. Why? Because as it turns out, that much older lover – the one who always managed to have his face off-screen during the memory projections – is none other than the rich and powerful (and dead) Walter Sylvan. And Elsa’s missing kid is actually Walter’s illegitimate son. This is a problem for Walter’s real son, Sebastian (Mojean Aria), because he doesn’t want to share his vast inheritance with his secret half-brother. The solution: pay Cyrus to kill Elsa and also destroy any trace of her relationship with Walter. That includes destroying the stored memories and killing her kid.

But as it turns out, Mae fell for Nick for real and regretted getting mixed up in this whole mess. So before Cyrus could kill Elsa’s son, Mae snatched the kid away and hid him on a remote island with an old friend. Then, to keep Cyrus from finding the boy, Mae deliberately tried to overdose on pills – and then threw herself out a window.

That’s right, Mae is dead. She killed herself to protect some kid who is barely in the movie. And, look – I get it. It’s a noble act, and it’s meant to be Mae’s way of redeeming herself for all the crappy stuff she did in the past. But it feels a little gross, honestly. I was really hoping Reminiscence wasn’t building toward a Christopher Nolan-esque tale of a dead wife/girlfriend/lover, but it was. And I kind of hate it. To be fair, the noir stories that Reminiscence is drawing influence from often conclude with unhappy endings (think of Chinatown as a prime example). But something about having Rebecca Ferguson deliberately kill herself to protect a character who spends almost the whole movie off-screen just feels weird.

Anyway, Nick, understandably upset, fries Cyrus’ brain with the machine. Then he blows the lid off the whole “secret illegitimate child of Walter Sylvan” thing. Case closed. But wait! Reminiscence has one more goofy twist to throw our way! Before the film concludes we learn that the entire movie was basically one big memory/dream, and that Nick has locked himself in his own machine for years, growing old (which means we get a shot of Hugh Jackman wearing old-age make-up while floating in a water tank) as he relives his happy times with Mae.