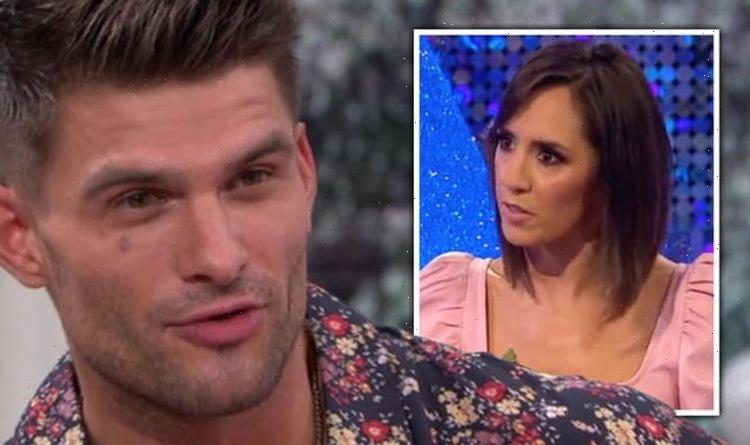 Strictly Come Dancing fans feared Aljaz Skorjanec was preparing to step away from the BBC competition after he and Sara Davies lost the dance-off on Sunday. The judges decided to save Tilly Ramsay and Nikita Kuzmin but Aljaz’s goodbye speech to Sara left viewers worried.

He said: “Thank you for letting me spend so much time, not just with you but with your family.

“I’ve been so welcomed up north, it made me feel like I was back home in Slovenia actually because everyone was so lovely and friendly.

Aljaz’s proclamation that he’ll “miss everything” about Strictly concerned fans but his wife Janette Manara has explained the pro dancer’s words.

Speaking with Zoe Ball on Tuesday, the It Takes Two star revealed how she had been spending her birthday.

Janette said: “Aljaz saw me yesterday he got me a lovely gift and we had a lovely day together the whole day and then we saw Sara obviously because she was on It Takes Two with him last night.

“We went for a lovely dinner us three and we celebrated last night which is nice.”

“It’s so heartbreaking saying goodbye to them on the show,” Zoe commented.

“They’re all so good this year though, it’s so tricky.

“And also we were all very concerned that it sounded like Aljaz’s was giving a goodbye speech, but he’s not leaving, is he?

“He is not leaving,” Janette replied. “I’m going to put an end to the rumours, it’s not happening.

“He’s too in love with the show. I think he was just so happy with Sara and they just created such an amazing bond and amazing friendship.”

“He fell in love going up to Newcastle and being with her family and meeting everybody up there up north,” she continued.

“So I think he was just gutted that the series ended for him but you know we’re friends with her.

“I told her she stuck with us forever now she’s got no choice.”

Zoe interjected: “I think once you’re in the family, you are friends forever.

“I went to see [former Strictly pros] my lovely Ian Waite and Vincent Simone do their show last night – they were so fabulous.”

Janette went on to announce that she will be presenting the Strictly Come Dancing Live tour 2022.

The Ballroom and Latin dancer will get the opportunity to dance herself as well as hosting the night.

Strictly Come Dancing airs on BBC One at 6.40am on Saturday.