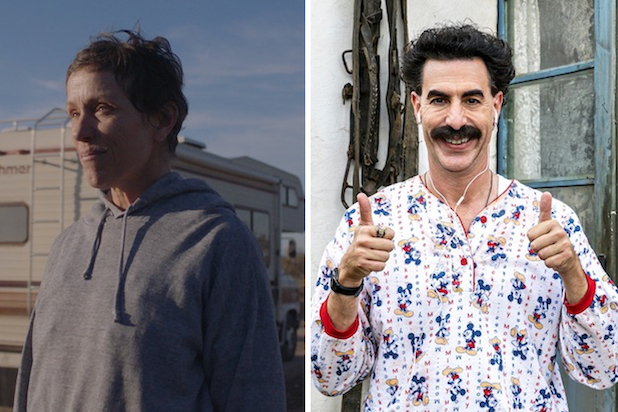 Netflix and Amazon each landed three films on the list of 10, with Netflix’s “Ma Rainey’s Black Bottom,” “Mank” and “The Trial of the Chicago 7” making the list along with Amazon’ “Borat Subsequent Moviefilm,” “One Night in Miami” and “Sound of Metal.”

Among the notable films missing from the PGA list are Universal’s Paul Greengrass Western “News of the World”; Christopher Nolan’s “Tenet,” which Warner Bros. released into theaters during the summer, to limited success; Spike Lee’s “Da 5 Bloods” from Netflix; and Florian Zeller’s “The Father” from Sony Pictures Classics.

“Tenet” and especially “News of the World” are the kind of large-scale productions that would normally be celebrated by the Producers Guild, but both were overlooked after a year in which theatrical distribution for films like those was nearly impossible.

The two awards have never completely agreed during that stretch, mostly because the Producers Guild stuck with a flat 10 nominees when the Academy moved to a variable number in 2011. But in three of the last four years, the slate of PGA nominees has included every film that would go on to be nominated for the Oscar.

In the 30 years of the Producers Guild Awards, which began in 1989, only once, in 1996, has the eventual Oscar Best Picture winner (which was “Braveheart” that year) not been first nominated by the guild.

In the animated feature category, two Pixar movies, “Soul” and “Onward,” were nominated alongside “The Croods: A New Age,” “Over the Moon” and “Wolfwalkers.”

Television nominations went to “Better Call Saul,” “Bridgerton,” “The Crown,” “The Mandalorian” and “Ozark” in the drama category, and “Curb Your Enthusiasm,” “The Flight Attendant,” “Schitt’s Creek,” “Ted Lasso” and “What We Do in the Shadows” in comedy. Limited-series and TV-movie nominees included “I May Destroy You,” “Normal People,” The Queen’s Gambit,” “Bad Education,” “Hamilton” and “What the Constitution Means to Me.”

Winners will be announced during a virtual ceremony on March 24.

“The Trial of the Chicago 7”
Producers: Marc Platt, Stuart Besser

“What the Constitution Means to Me”
Producers: *Eligibility Determination Pending*