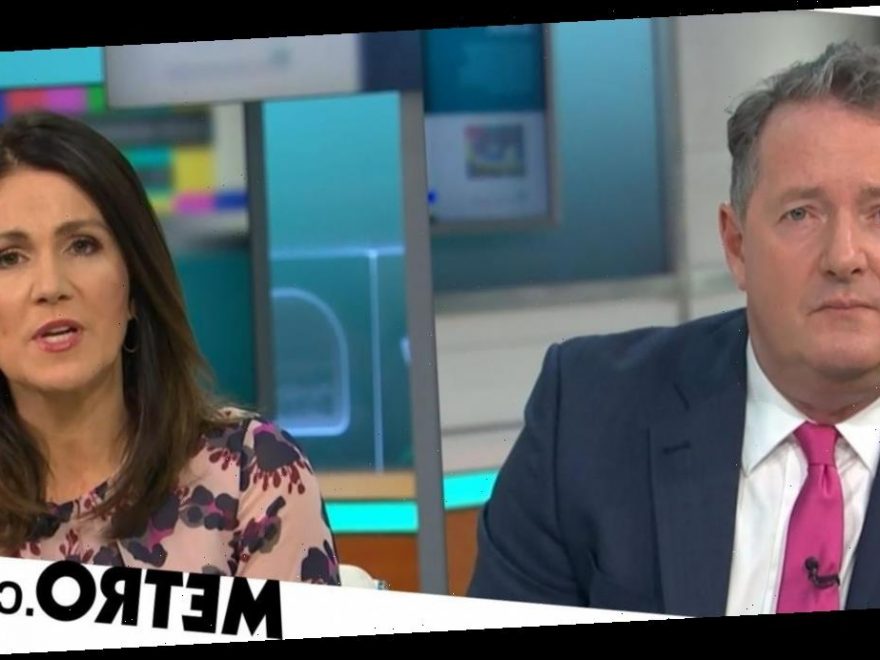 Piers Morgan and Susanna Reid were so ‘appalled’ by the inadequate school meals parcels that they managed to create an alternative version for £15.

Catering company Chartwells UK had been contracted by the government to put together food boxes worth up to £30 for impoverished families during the coronavirus pandemic and lockdown.

However, many parents complained on social media that the parcels were disproportionately small and shared pictures on social media of the little food they had received.

An investigation is now underway to determine whether Chartwells UK supplied the parcels deemed to be inadequate.

During a debate about the controversy on Good Morning Britain, Piers revealed: ‘This is what we’ve put together based on what Twitter was doing yesterday of how you can spend the money a different way. Look at the difference between the two.’

Susanna then showcased the amount of substantial food they were able to fill the box with, consisting of five potatoes, an onion, six eggs, a packet of salted butter, two pears, two oranges, two plums, six tomatoes, two pints of milk, a loaf of bread, a leek, Dairy Milk and packet of Oreos, sweet potato, four beef burgers and a pack of bacon.

In total, the TV presenters’ alternative version cost around £15.

‘That’s what people should be getting,’ Susanna stated.

Piers added: ‘I find this really shocking and once again, credit to Marcus Rashford for using his status to shed light on this appalling situation.’

Jack Monroe, food writer and anti-poverty campaigner, said of the government’s parcels: ‘It seems to be something to do with profit margin. It’s a £15 basket but only contains £5 worth of food. You’ve got to ask yourself where that other £10 is going.

‘It’s just a disgrace to be honest, I’ve literally been up all night talking to parents in my DMs on Twitter, hundreds of them who’ve been sending me similar pictures saying I can’t feed my kids with this Jack, what can I do?

‘I’m like, make noise about it, get something different, ask your schools to go back to the voucher system because two measly slices of cheese, three pieces of ham and a couple pieces of fruit and sweet potatoes is not enough for one child for five days worth of food.’

Chartwells UK has since responded to the controversy and told Metro.co.uk it is waiting to hear back from the parent who shared the original image to confirm that they were the supplier.

A spokesperson for the firm said in a statement: ‘We take our responsibility to provide children with access to nutritious food very seriously. We have worked hard to produce food hampers at incredibly short notice during these challenging times.

‘Our hampers follow the DofE specifications and contain a variety of ingredients to support families in providing meals throughout the week. In the majority of instances, we have received positive feedback.

‘In this instance, the image on Twitter falls short of our hamper specification and we are keen to investigate with the relevant school so we can address any operational issues that may have arisen.’