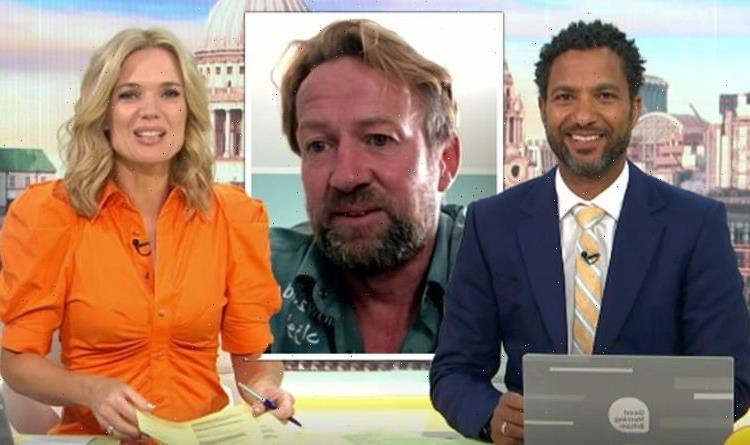 Following his arrival in Oslo, Norway from Afghanistan, Pen Farthing spoke about trying to evacuate his animals from the Nowzad shelter along with his colleagues. While he was able to get many of the cats and dogs he’d rescued on the flight, he was forced to leave his workers behind. Speaking on Good Morning Britain, the former Royal Marine explained how he facilitated his evacuation from Kabul airport with the Taliban but hosts Sean Flecther and Charlotte Hawkins were keen to ask about an expletive-aden voicemail message which was “leaked” which he sent to an aide of Ben Wallace.

“You’re also aware there’s been what is being reported as a leaked voicemail that you left an aide of Ben Wallace, Peter Quentin, it’s sort of a heated message they are saying is left,” Hawkins began. “Was this you?”

Mr Farthing replied: “I’m going to have to say now so everybody knows, I’m incredibly embarrassed about my language and I do apologise to everybody who’s listened to that.

“I was at the lowest point I could possibly be. I understand how the world works but emotion got the better of me.

“For all those who have had to listen to that I do apologise for my language.

“I should not have said it like that but the sentiment, yes, I was just incredibly upset, angry, frustrated.

“It was the lowest point. I had no other option and I didn’t know what else to do so that’s why you’ve heard some colourful language.”

Those watching at home were quick to hit out at the GMB hosts for asking about the voicemail instead of focusing on how Mr Farthing and his animals were since arriving in Oslo.

“Terrible interview with Pen. GMB are just looking for drama and gossip and did not even asked how the animals are,” one viewer posted.

Another added: “Dreadful interview. @PenFarthing did everything he could. The leaked call only showed his passion & frustration & was what he’d said publicly. He has everything to be proud of.”

“#GMB are an absolute joke. They non stop spoke about Pen Farthing and his animals before he got out, questioned MPs all week and now he is out they are talking to him like this?!” someone else tweeted.

“As if he did something wrong. He just fled Afghan and is ex serviceman have some f**king respect.”

A fifth continued: “Sean fishing for a non story here. Pen clearly don’t give a f**k about saying f**k.

In the same interview, Mr Farthing hit back at claims he took up empty seats on his evacuation flight with his animals.

“Firstly let’s make this crystal clear as I’m sick to death of explaining this,” he told the hosts.

“The empty seats were above. No one in the British government facilitated by entry into the airport, I did that with the Taliban.”

Mr Farthing added he spoke with the British Army and asked if the empty seats on his plane were needed before take off.

“Sadly on that flight there was just me. I asked the British again, would you like to add some people on the flight?” Mr Farthing detailed.

“They assured me they has enough capacity. There were several empty seats on that flight out of there.”

Good Morning Britain airs weekdays on ITV at 6am.