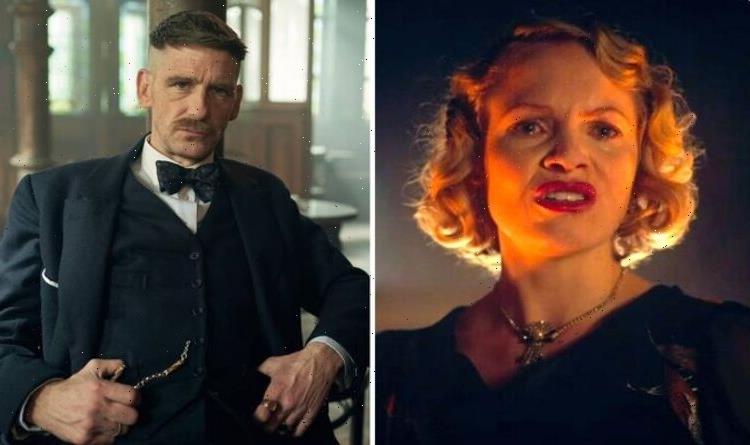 Peaky Blinders fans are soaking up every moment of season six as they know it will be the last of the violent period drama. Tommy Shelby (played by Cillian Murphy) and the rest of the Peaky Blinders gang will be gone for good once the series finishes in a couple of weeks’ time but there are still some important questions left to answer. Someone who is yet to make an appearance in the BBC drama is Linda Shelby (Kate Phillips) and her absence has not gone unnoticed by fans.

So far, the first four episodes of Peaky Blinders have aired on BBC One but there has been no sign of Arthur Shelby’s (Paul Anderson) estranged wife Linda.

“But where the f**k is Linda and Jimmy McCavern? And where’s Alfie’s screentime at???”

Another simply questioned: “Not seen Linda at all have we?”

Where is Linda Shelby?

Linda had been Arthur’s anchor for series three and four, trying to keep him on the straight and narrow as he wanted to turn his life around.

Whenever he was having issues with his mental health, she was the one to guide him through it.

But when season five came around, the couple had distanced themselves from one another with Linda looking to speak to a lawyer in London about divorce.

She also formed a bond with a widower which infuriated Arthur so much so that he slashed the man’s face in anger.

Furious by what he had done, Linda pulled a gun out and aimed it at her husband.

But before she was able to pull the trigger, Aunt Polly (Helen McCrory) came to the rescue and shot her in the arm.

Linda didn’t die from her injuries but quickly fled the Shelby estate after having the bullet removed.

She hasn’t been seen since but there are some clues that indicate Linda will be back.

Actress Phillips was previously spotted on the set of Peaky Blinders last year during the filming for series six.

She was spotted alongside actor Anderson so scenes between the onscreen husband and wife are expected.

The star was also among the cast attending the season six premiere in Birmingham.

She spoke about it feeling like an end of an era returning to the sets, while on the red carpet.

Phillips said: “It felt exciting, we’ve been waiting to do it, lockdown stopped us, pushed us back a year.

“Ultimately, [it was] super emotional for a number of reasons.”

So fans can expect Linda to return for the final outing but why will she return after escaping the wrath of the Shelbys?

Peaky Blinders continues every Sunday at 9pm on BBC One.