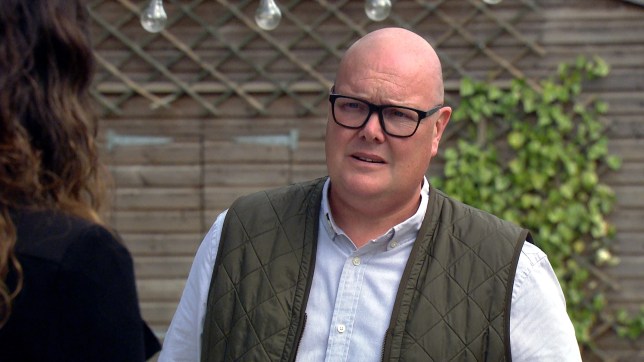 And as things become a strain for them both, Paddy Kirk (Dominic Brunt) does his best to try and be proactive.

But unsurprisingly, he gets it all so badly wrong.

Lucy told us that Chas is very much ‘piggy in the middle’ between Faith and Cain.

‘She’s got the devastation of the cancer diagnosis while having to deal with her mum wanting affection and attention from her son, and Chas getting little, or anything, from her mum while being supportive,’ she explained.

The background to this is the troubled relationship that Faith has, especially with Cain. ‘She abandoned both of them as kids and left them with alcoholic Shadrach,’ Lucy said.

‘[Cain] holds a lot of pain, guilt and hatred towards his mum for what we then went through with Shadrach.’

This was the reason that Faith held off from telling her children about her illness, because she didn’t want the relationship between them to go from hatred to pity. What she hoped for was real love and forgiveness.

‘I think Chas has forgiven her and processed everything that’s happened in the past,’ Lucy continued.

‘For Cain it’s very raw. I think to let in that emotion about feeling any brief possible grief for his mum or opening up emotions towards his mum, it’s easier for Cain to just shut off because that will open up a whole history of their hurt and emotional things they’ve been through since they were kids.’

As Chas struggles to hold things together and try to get Cain to at least try to forgive his mother, there’s a shock in store for her. Lucy describes the scene:

‘Chas and Paddy (Dominic Brunt) have a conversation in the back room and Paddy lets slip that he’s got a brochure for end of life care for a hospice for Faith when it gets too much for Chas to handle.’

This realisation that Paddy is making plans for Faith’s final days is hugely upsetting for Chas. She goes to the Hide to look for Belle (Eden Taylor-Draper), and instead bumps into Al Chapman (Michael Wildman) and the two end up sharing a passionate kiss.

‘This is just a kiss, an outpouring of everything, a release, something that just goes somewhere that is completely unexpected really,’ Lucy explained. ‘She just takes it that step too far.’

While Chas seeks comfort with Al, uppermost in her mind is the need to reunite Cain and Faith before it’s too late.

‘They don’t have the diagnosis about how much time she’s been given, don’t know anything yet, just that she’s been diagnosed with the cancer and its terminal,’ Lucy shared.

‘Chas is very keen to keep flogging it and keep trying to get Cain back into his mum’s life.’