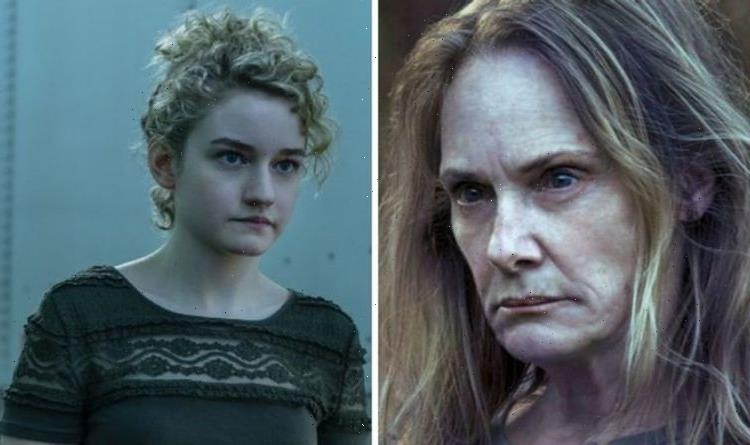 The Express recently reported Ozark had officially wrapped up production of season four, so viewers won’t have to wait too long until its release. However, this hasn’t stopped fans from coming up with theories about the fate of their favourite characters in the upcoming season of the Netflix crime series. After spotting a major clue on an Instagram post, one viewer suggests an unexpected death.

The series’ showrunner Eric Koretz recently took to Instagram to share a behind the scenes snap of the clapperboard.

The photo was captioned: “Final episode…I’m not telling you how it ends.”

While the clapperboard had information on it, only useful to the showrunners, some eagle-eyed viewers a cryptic symbol which they believe provided a clue to season four.

Taking to Reddit, the viewer asked other Ozark fans what they believed could symbolise.

In the past, episodes of the series Ozark opened up with four symbols inside the letter ‘O’ which were arranged to spell out ‘Ozark.’

However, as mysterious as they seemed, the symbols often provided an insight into the episode and what it could entail.

This time it was no different, although there were no new episodes, the symbols appeared on the clapperboard of what Eric captioned, the final episode.

In the letter ‘O’ was an image of a gun, two dolphins while the other two were unrecognisable.

On the Reddit thread, E4theKingSlayer predicted: “Ruth might end up pushing Darlene out of the barn window maybe.”

Although the thoughtful gesture was out of Darlene’s nature, in true Ozark fashion things could change in a split second.

With Ruth quitting her role with the Byrde’s and joining forces with Darlee, the two women could come to blows in season four.

Darlene and Ruth’s cousin Wyatt Langmore was involved in a controversial relationship that she wanted him to get out of, because Darlene was old enough to be his grandmother.

Perhaps by murdering her, this could be the only way for Ruth to help her cousin get out of the relationship.

With Ozark known for spurring unexpected twists and turns, it is a possibility Ruth could kill her after taking all the information needed for the Byrde.

Since Marty Byrde (Jason Bateman ) and his family first moved to the Ozarks, Ruth has been working with them to help launder cash for the Mexican cartel.

However, after they betrayed her and failed to protect her after she was attacked by Frank a heartbroken Ruth went to join forces with Darlene.

She had hated the Byrdes for moving to her territory and bringing their illegal dealings, which interrupted her heroin empire.

So far, Darlene has proved hard to kill as she was always a step ahead, so if this theory was to come true, the scene would truly be a jaw-dropping moment.

Thankfully with the recent update of production wrapping up, it’s safe to say viewers can expect the new instalment to premiere sometime in 2022.

Ozark seasons 1-3 are available to stream on Netflix.