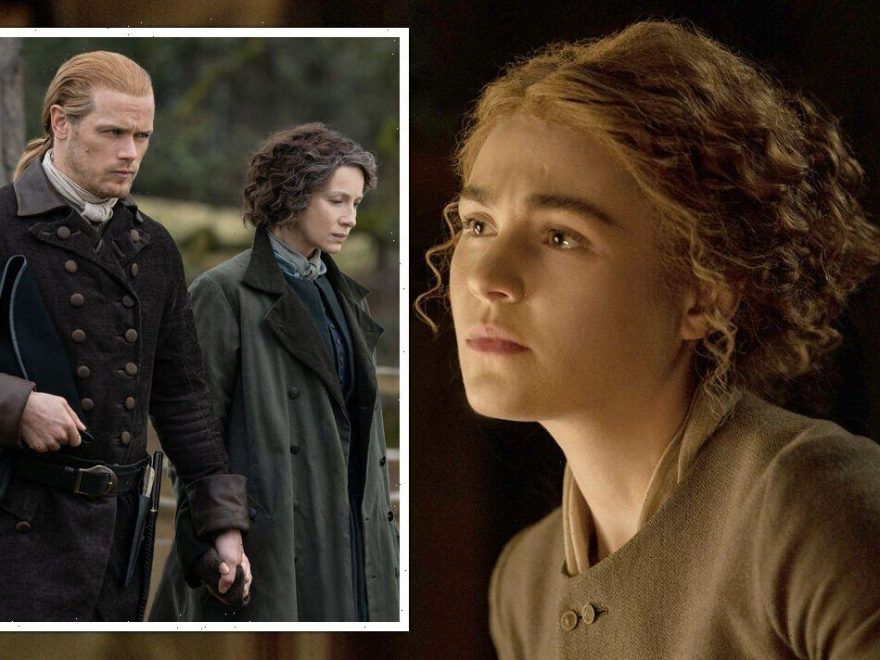 The penultimate episode of Outlander ended with Richard Brown (played by Chris Larkin) and his men arriving at Fraser’s Ridge demanding Jamie Fraser (Sam Heughan) hand over his wife as they plan to arrest Claire (Caitriona Balfe) for the murder of Malva (Jessica Reynolds). It’s highly unlikely Jamie will allow his wife to be taken without force so could it kickstart a storyline which sees their home burnt to the ground?

Fans will remember at the end of episode four, a man with long dark hair was seen whistling Colonel Bogey’s March and holding a gem in their hand.

Many believe this man was Wendigo Donner who was last seen in the series five finale and revealed himself to be a time-traveller to Claire when she was captured by Lionel Brown (Ned Dennehy).

Claire, who was trying to convince him to help her, explained he needed a gemstone to travel back in time and she would give him on if he helped.

While Wendigo disappeared before Claire was attacked, his return hints the long-awaited fire at the Big House could take place in the season six finale.

Fans of Diana Gabaldon’s books know Wendigo breaks into the Fraser family home and steals a gemstone from Claire.

However, he knocks over her supply of ether which starts a fire when Young Ian (John Bell) lights one of Brianna’s (Sophie Skelton) matches.

Wendigo dies in the fire and the house is burnt to the ground, while Jamie and Claire survive.

The Starz show has already made some changes to Wendigo’s storyline and given he already has a gemstone, it’s likely another series of events could start the fire.

With Claire hiding in her surgery from Richard and his men, they could try to take her forcibly from her home and knock the ether over in the scuffle.

When a match is lit, the house could group in flames and give Claire and Jamie a chance to escape.

Viewers know Roger (Richard Rankin) and Brianna both discovered an obituary stating the couple died in a house fire, which was their reason for travelling back to the 18th Century.

Could Claire and Jamie fake their own deaths so they can get away from all the trouble at the Ridge?

Unfortunately, they may not get the chance to inform Brianna of their plan and she could learn her parents have perished.

The news would mean Brianna has no reason to stay in the past and she could agree with Roger to return to their own time.

Claire would be heartbroken to hear Brianna thinks she is dead but also that she has left the 18th Century.

Would Claire follow her to reveal the truth or continue to let her daughter believe she is dead so her family can move on with their lives?

If Claire and Jamie did fake their own deaths to escape the aftermath of Malva’s death, it’s likely they could return to Scotland.

Filming for Outlander is set to take place at Midhope Castle, which is the location for Jamie’s childhood home, Lallybroch, in the coming months.

Could it be part of a storyline which sees Jamie, Claire and Young Ian return to reunite with his sister Jenny (Laura Donnelly).

Outlander season 6 continues on Starz in the US and StarzPlay in the UK on Sunday 24 April.