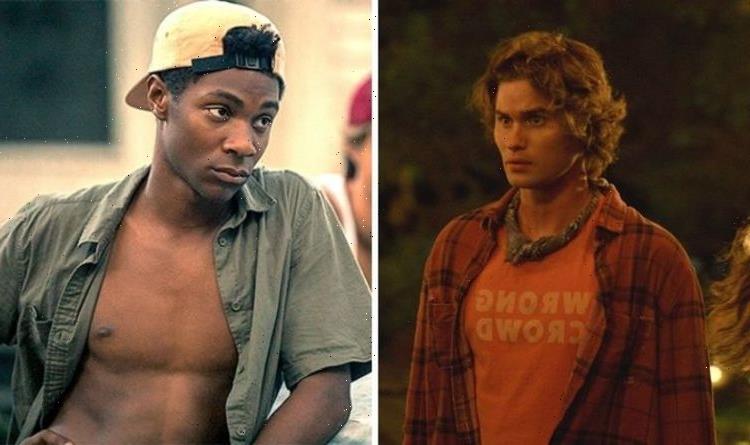 Outer Banks is Netflix’s mystery series which followed John B (played by Chase Stokes) and his friends on a journey to find the Royal Merchant Treasure which was linked to his father’s disappearance. Season two revealed his best friend Pope Heyward (Jonathan Daviss) was the rightful heir to the gold and fans predict this could see them come to odds.

John B’s father Big John (Charles Halford) went missing and was presumed dead after he disappeared on the trail looking for the treasure.

So he rounded up his friends Pope, JJ Maybank (Rudy Pankow), Kiara Carerra (Madison Bailey) and Sarah Cameron (Madelyn Cline) to help him complete the mission.

On their journey the group encountered tons of trials and tribulations to overcome, John B was even sentenced to death for a murder he didn’t commit.

The teenager was raised as an only child by his father, so he was determined to use the Summer to find the treasure Big John seemingly died looking for.

With his father’s remains never found, John B was convinced his father was still alive and also thought the journey would reunite them.

In season one it was highlighted that the Outer Banks, where the teenagers were from, had some major class divisions.

The Pogues resided on the south side and were a working-class community who lived to work for the upper class and make their lives easier.

Those from the upper-class part of the Outer Banks were labelled the Kooks and were the wealthy residents who looked down on the Pogues.

At the beginning of the series, it was revealed Sarah and Kiara were raised as Kooks but abandoned their wealthy lives to help John B on his adventure.

In a surprising turn of events, by season two it was unveiled Pope was the rightful heir of the Royal Merchant Treasure.

Fans believe this new revelation could cause major problems for the two friends and the gold could be the reason they come to odds.

John B and Pope had been childhood best friends since third grade – he had joined the mission to help his friend, without caring about its monetary value.

Season two delved into the history of the treasure which showed it was uncovered by a slave who was captured on the Royal Merchant.

The ship had also been transporting hundreds of millions worth of Spanish gold when it unexpectedly sank.

As the only survivor, the enslaved Denmark Tanny took tons of the gold and was able to buy freedom and the freedom of others, while hiding the rest and leaving clues for his son.

He was also told his family were in possession of a mysterious key which Carla believed could cure her illness.

During a visit to his great-grandmother, she confirmed Denmark was their ancestor and Pope was able to find the key hidden in her house.

With this new discovery, he became more invested in locating the Royal Merchant Treasure to learn more about his family’s history and get justice for Denmark, who was killed by Carla’s ancestors.

In the shocking finale, it was revealed Big John was alive and living in Barbados.

The revelation could change everything for the group and could see Pope become isolated once they learn the treasure they’re searching for rightfully belongs to him.

Outer Banks seasons 1-2 are available to stream on Netflix.