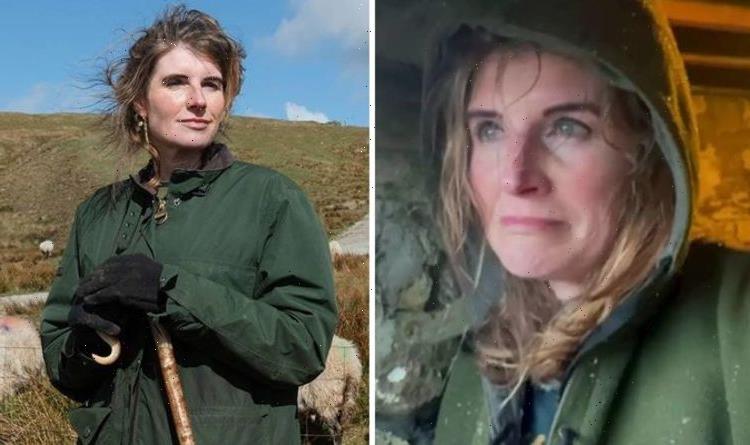 Our Yorkshire Farm's Reuben Owen herds sheep in the snow

Our Yorkshire Farm documents the lives of Yorkshire Shepherdess Amanda Owen, her husband Clive and their nine children. They reside at the beautiful Ravenseat Farm in Yorkshire, where they take care of their livestock and land while trying to maintain a reasonably normal family life. But Amanda has opened up to talk about some of the struggles they have faced as of late.

As with any rural location, sometimes the weather can play havoc with the everyday goings-on.

Ravenseat Farm is no different as it sits on 2,000 acres of farmland in Upper Swaledale, Yorkshire.

Amanda Owen was welcomed onto ITV’s morning show Lorraine to give fans an update on what’s been happening.

She sadly talked about how Storm Arwen had impacted all of them at the famous Channel 5 farm.

Amanda told Lorraine: “The storm has played such a big part this last week.

“What with the weather we have had…We’ve had no electricity, no water.

“We are OK because we are all here.

“But it had its high points and low points – I think the low point was when tea was actually fried eggs and Champagne.

“Being plunged into darkness, sub-zero temperatures.”

Storm Arwen has caused problems for families up and down the country over the past week.

Homes and businesses have been left without power in the north-east of England with Northern Powergrid labelling it as the “worst storm in over 20 years”.

Thankfully, electricity is now back on in all 240,000 properties which were affected, 12 days after the storm began.

Storm Arwen affected the stars of another popular reality series over on ITV.

I’m A Celebrity…Get Me Out of Here! aired its first-ever pre-recorded episode as the show suffered technical difficulties because of the storm.

More so, the contestants had to be taken out of the castle for a few days for safety purposes.

I’m A Celebrity wasn’t shown for three days as the crew were trying to get the show back up and running.

Thankfully, Ant McPartlin, Declan Donnelly and the rest of the stars were able to resume their normal schedule shortly after.

Our Yorkshire Farm season five finished at the end of November 2021.

There is no need to worry as the docu-series has been given the green light for another season.

A release date hasn’t been confirmed just yet but Our Yorkshire Farm will be back sometime in 2022.

Our Yorkshire Farm is available to watch on My5.