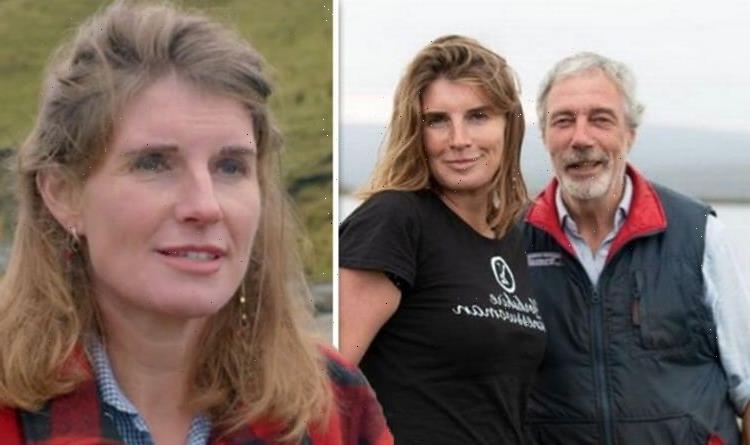 Amanda Owen and Clive Owen live on Ravenseat farm with their children Reuben, Miles, Edith, Violet, Sidney, Annas, Clemmie and Nancy while their eldest Raven has flown the nest to study at university. The married couple spend the majority of their days tending their land on Our Yorkshire Farm but Amanda has revealed her husband still makes time for romantic gestures.

Writing in her book Tales From the Farm, Amanda shares a sweet moment between herself and her husband.

Discussing the farm in wintertime, Amanda wrote: “The landscape might seem lifeless at this time of year, but romance certain isn’t dead in this neck of the woods.

“Every February, without fail, my husband Clive will save a few quid bypassing the newsagents and craft his very own super-sized Valentine’s Day message, aided and abetter by the sheep.

“With a little thought and preparation, he is able to feed his heaf of a sheep in the shape of a heart while I watch this visually spectacular declaration of his affections from a vantage point across on the opposing hill-end.”

“Maybe I should get him to raise the baa (sorry) and request that he makes more effort this year by spelling out ‘I love ewe’,” Amanda added.

Meanwhile, Amanda, Clive and their nine children have been looking forward to life after Ravenseat.

The estate is one of the most remote farms in the country located in Upper Swaledale in Yorkshire.

Our Yorkshire Farm follows the family’s lives at Ravenseat but they do not own the estate.

The farm is instead owned by billionaire Robert Miller who is the co-found of DFS (Duty Free Shoppers).

Amanda and Clive have lived and worked on the farm for more than 20 years.

However, the couple are looking to put down some permanent roots with a derelict farmhouse they purchased just outside of Ravenseat Farm.

In the most recent season of the Channel 5 series, viewers watched as the couple began plotting out their plans for the farmhouse.

During a recent interview on BBC Radio 4, Amanda discussed the family’s future at Ravenseat.

“And of course they go through stages where they’re more enthusiastic about the countryside.

“As they get older into their teens obviously they want to go away.”

The Yorkshire Shepherdess explained why she and Clive decided to purchase a new property.

She continued: “When the opportunity came up and I saw that ‘For sale’ sign go up, it was like a no brainer. The opportunity to get that doesn’t come up that often.

“I needed to buy it because it’s security, for us and for the children.”

Our Yorkshire Farm is available to watch on My5.