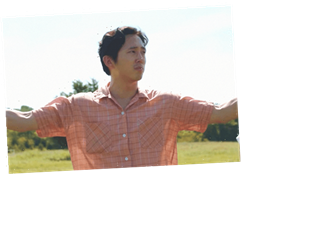 Glenn Rhee is having the Best. Afterlife. Ever.

Walking Dead alum Steven Yeun snagged an Oscar nomination on Monday for his performance in Minari. The actor’s nod was an historic one: Yeun becomes the first Asian-American performer to ever be recognized in the in the Lead Actor category. (View complete nominations list here.)

Shortly after getting killed off Walking Dead in 2016, Yeun opened up about the professional frustration he experienced during his six-year run on the AMC zombie drama, telling Slate he “felt beige with Glenn,” adding, “That was a little bit of the frustration that I could never explain to the wider society, to fans of the show… It’s like: nice guy, dependable, supportive, benign — beige. And as a Korean man, I am not beige.”

Yeun was quick to note that he was nonetheless “incredibly grateful” for his time on Walking Dead. “Did I have a wonderful time on that show? Yeah!” he maintained. “I wouldn’t take that experience back at all. I made lifelong friendships. I got to learn so much. But I will say that I felt cramped. I felt like there wasn’t space for me to fully spread all of who I was, and that was partly due to me, too, because when I started, all I was trying to do was to work within the parameters that they were giving me. And then, over time, I just outgrew it.”