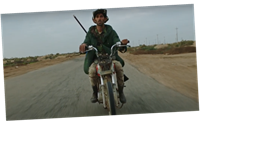 Italian filmmaker Gianfranco Rosi has returned with “Notturno,” another poignant visual stunner about the harsh realities of everyday life in the Middle East. Filmed over the course of three years, the director and cinematographer shot throughout the war-torn region on the borders between Iraq, Kurdistan, Syria, and Lebanon. A moving first trailer reveals the arresting juxtaposition captured by Rosi’s cinematic eye; a soldier stepping over a puddle, a wall of children’s bloody drawings.

Here’s the official synopsis: “‘Notturno’ captures the everyday life that lies behind the continuing tragedy of civil wars, ferocious dictatorships, foreign invasions and the murderous apocalypse of ISIS. Gianfranco Rosi constructs a sublime cinematic journey through the region finding peace and light within the chaos and despair in the aftermath of war. A mosaic of intimate moments and luminous images, ‘Notturno’ is a profound and urgent cinematic achievement, from a master of the documentary form.”

In his rave review for IndieWire out of the Venice Film Festival, critic Ben Croll wrote: “Rosi constructs this film as a series of handsomely shot vignettes that forgo interviews, voiceover, or context cues in order let the striking, fixed-camera compositions do much of the talking. Here, he pushes that aesthetic even further than before, creating an impressionistic tableau-film that feels in places like a photojournalistic inquiry breathed to somber life. But Rosi’s tight formal control — especially when it comes to sound design — never lets you forget that this is cinema through and through.”

Rosi is best known for 2016’s “Fire At Sea,” the Oscar-nominated documentary which profiled in painful detail the European migrant crisis through the small Sicilian island of Lampedusa. The film followed the efforts of a 12-year-old boy and a local small town doctor to rescue and treat refugees from North Africa after perilous journeys across the Mediterranean. Before that, his 2013 film “Sacro GA” was the first documentary to win the Golden Lion at Venice.

“Notturno” is Italy’s official entry to the 93rd Academy Awards for Best International Feature. Super LTD will release “Notturno” on Virtual Cinema on January 22, and everywhere else on January 29. View the stunning first trailer below.