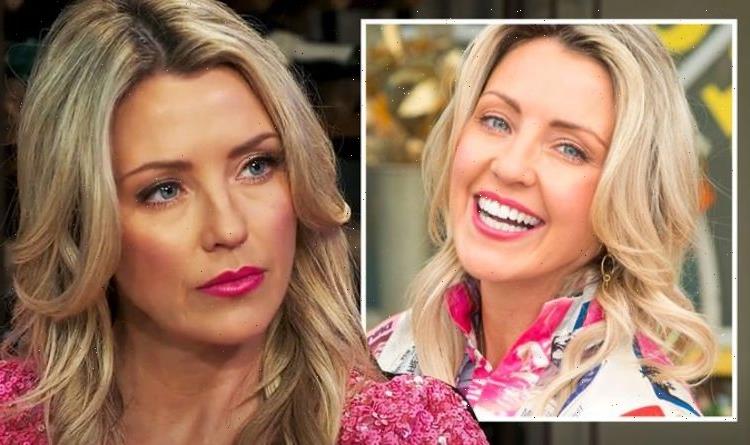 Amy (played by Jacinta Stapleton) has been delighted by the arrival of her daughter Zara Selwyn (Freya Van Dyke) on Neighbours in the last couple of weeks but it has been clear there are issues within their relationship. The colourful character made her grand return as a regular character on the Channel 5 soap last year and she harboured many secrets on her shoulders but with her child turning up in Erinsborough, her darkest one to date could be exposed. How will her friends and loved ones react when they realise she had a part to play in her ex-husband’s death and will she be able to explain herself to them?

The impact of Zara arriving on Ramsay Street has already had repercussions on Amy’s life as her romance with Ned Willis (Ben Hall) and Levi Canning (Richie Morris) has been put in jeopardy.

Her friendship with Toadie Rebecchi (Ryan Maloney) will also be put into question as her daughter’s antics have serious consequences.

Toadie is the one person Amy has been able to confide in about all her troubles as they knew each other years before during her first stint on the show.

He knows she has struggled with her relationships as she married two men who eventually turned out to be gay and this brought their romances to an end.

However, it could be as Zara was growing up and just before she returned to Erinsborough, Amy actually married for the third time.

Believing this might have been the one, Amy will have let Zara and her other two children get to know her new husband despite them all living with their own fathers.

Unfortunately, husband number three could’ve been having an affair behind his wife’s back and not too long into the marriage, she will have discovered the truth.

Furious and unable to accept another marriage was coming to an end, the beloved Ramsay Street character could’ve committed murder.

After killing her husband, Zara might have walked in to see the crime scene and with no other option, Amy could have forced her daughter to help her hide the body.

This will have put a serious strain on their relationship and hence why the mother of three will have fled to Erinsborough for a short stint in 2020.

A few things come up

As the end of her third marriage ended in death, the returnee to Ramsay Street will have wanted to keep this under wraps.

Before returning as a character full-time, Amy will have tried to fix things between her and Zara but the youngster will have wanted to just get on with her life.

With it seeming her past life was well and truly behind her, the mother of three will have wanted to begin a new life in Erinsborough where no one knew her killer secret.

Therefore, when Zara turned up in the New Year seemingly wanting to work on her relationship with her mother, Amy was left in a fluster.

Although she wants to keep her life in Ramsay Street intact, it seems her daughter is influencing and destroying the world she has built for herself.

Is it only a matter of time before Zara tells all Amy’s friends and loved ones she is a killer or will her mother be able to silence her?

In an exclusive interview with Express.co.uk, the actress who plays Amy, Jacinta, explained her character’s past will become important in the not so distant future.

The soap star said: “Yes, there are a few things that come up and it will make viewers realise why she returned to Erinsborough.

“Amy is at a stage in her life where she doesn’t want to jet-set around anymore. Her whole reason for heading back to Erinsborough is that it felt like her home, and she wants to create a home there for her children to come and stay with her.

“It’s a surprise that Zara is there, but that was Amy’s ultimate goal, so now it’s really about navigating those relationships, as she has never done that before.”

Jacinta continued: “I am not a mother myself but have spoken to a lot of friends about motherhood and they all say there’s no rulebook and as a parent, you can feel like a failure at any point, so I think that Amy puts a lot of pressure on herself.”

Having returned to the show after almost 20 years, the actress spoke about how she felt making her comeback and being the centre of some dramatic storylines.

She said: “It’s so fun – Amy is just so fun and fabulous. dressing up in Amy’s heels with her dresses and lots of hot pink outfits is really gorgeous, I just love it.

“Amy is a really fun and dynamic character and I adore playing her,” she added before discussing whether she knew her character was going to end up in a polyamorous relationship.

The actress explained: “I knew about Amy’s family and some potential arrivals in Ramsay Street for her, but not the polyamorous relationship, that was a surprise for all of us.”

“The writers were really respectful and we had lots of meetings about the polyamorous storyline to ensure that we get it right,” Jacinta added.

“Polyamory isn’t something we see often on TV, it’s not something I have seen on Australian TV at all, so we have really tried to represent this as honestly as possible.

“It’s really been something that we have wanted to delve into and do the dynamic justice.

“I think it’s fabulous! I’m super happy to be representing such a modern relationship – love is love and it’s great to see Amy so happy.”

Neighbours airs weekdays at 1:45pm and 6pm on Channel 5.