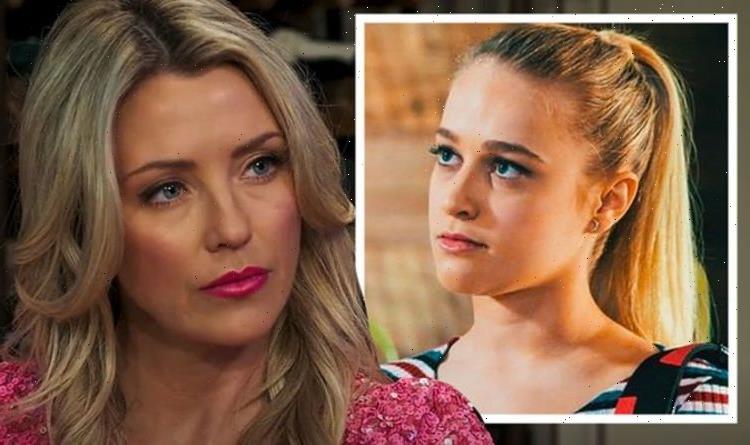 Neighbours: Pierce and Dipi are confronted over their affair

Amy (played by Jacinta Stapleton) has landed herself into some troublesome situations since she returned to Neighbours a few weeks ago. One of the main problems she has been having is with Roxy (Zima Anderson) as the youngster believes the Flamingo Bar manager stole her job. The two women have almost been fired from their jobs for their reckless behaviour and they’ve realised they have more in common than they first thought. However, an almighty bombshell might be set to change the face of the Channel 5 soap as Amy could be hiding the secret she is actually Roxy’s birth mother.

It has always been thought Roxy is the minxy daughter of former Erinsborough residents Adam Willis (Ian Williams) and Gemma Ramsay (Beth Buchanan).

When the youngster first arrived on the show, she was instructed to live with her auntie, Terese Willis (Rebekah Elmaloglou), due to her troublesome antics.

Ever since she has made a life for herself on Ramsay Street and is currently enjoying a romance with Kyle Canning (Chris Milligan).

Though, her life does tend to mirror Amy’s as she was introduced in the late 90s as a flirtatious and ditzy character.

Off-screen, the bar manager has had two children but could have at third whom she gave up for adoption?

When Amy left the show in 2000, she had been enjoying a romance with Damien Smith (John Ridley) and fell pregnant with the flight attendant’s child.

They decided to elope and left Erinsborough before the baby was born and there was no saying who the child was.

On discovering her husband was gay and still carrying his baby, Amy could have decided to give their daughter away rather than have it mixed up in a dispute.

Adam and Gemma could have been the adoptive parents who took Roxy home and raised her as their own, not believing she would ever meet her birth mother.

Amy might not have known to begin with the youngster was her firstborn but having spent more time with her recently, it could have dawned on her just who Roxy is.

Roxy wants to be Amy

Not one to keep information to herself, Amy could confide in her best friend, Toadie Rebechhi (Ryan Maloney) about her suspicions.

Unfortunately, although she might have wanted to keep it a secret, Roxy could overhear the entire conversation.

Confronting her auntie Terese, the youngster could learn she was adopted at birth but the family never knew who her mother was.

Finally speaking to Amy about it, the two women could agree to do a blood test to see if they are in fact related.

If the results confirm they are mother and daughter, they will have to work on building a relationship, rather than being enemies.

Speaking in an exclusive interview with Express.co.uk, the actress who plays Roxy, Zima, addressed her character’s similarities to Amy.

In reference to the job of Flamingo Bar manager, the soap star said: “I think she’s jealous [Amy] got the job.

“But the jealousy really does come from wanting what people have and so I think Roxy really does look up to Amy.

“She wants to be where [Amy] is by the time she is her age, 100 per cent. She’s a role model for her and she does respect her a lot for that.

“I think that’s why she did get quite angry – it’s a very odd way to express that [respect] to somebody but I definitely think she does look up to Amy a lot.”

“She can’t sway anybody to think she deserves it because she did try quite hard with all the volleyball stuff and that didn’t work.

“So when Roxy has to play dirty, she plays dirty. The only way she can do that is to bring the person down.

“I feel like that’s what she’s honed in on and she’s focussed on bringing that person down because that the only way she can get what she wants.

“It’s tough because Roxy is bubbly, Amy is bubbly and they’re both super strong and that’s why they butt heads so much as they are so alike.”

Will these two women be able to put their differences aside to form a strong mother-daughter relationship?