Harry Styles is having one hot summer. The “Harry’s House” artist is traveling back in time for midcentury-inspired films “Don’t Worry Darling” and “My Policeman,” with the latter actually set in 1957 Brighton, U.K.

Styles stars as a closeted cop caught in a love triangle between his wife (Emma Corrin) and a museum curator (David Dawson) in Amazon’s “My Policeman,” based on Bethan Roberts’ 2012 romance novel of the same name. Ron Nyswaner penned the script. “Genius” director Michael Grandage executive produces and helms the adaptation, with a theatrical release October 21 and an Amazon Prime Video premiere November 4.

Styles is Tom, a gay police officer who hides his sexuality by dating schoolteacher Marion, played by “The Crown” breakout Corrin. Tom is also secretly linked to arts curator Patrick, but his marriage to Marion implodes both of his relationships. The film jumps between the 1950s and the 1990s, with Styles’ Tom later being played by Linus Roache and Marion now portrayed by Gina McKee, as the couple decide to take an ailing Patrick (Rupert Everett) in after he suffers a stroke.

“My Policeman” is produced by Robbie Rogers, Greg Berlanti, and Sarah Schechter, a partner at Berlanti Productions. The film took eight years to get made, with Rogers telling Vanity Fair that “we’ve always heard the most political versions of ‘this is going to be difficult to make’ or ‘no one’s going to watch this.’”

Styles was also not an obvious choice for the film, as director Grandage revealed that the singer sought out the project after reading the script. “He knew every single beat of it at that meeting. I found that incredibly impressive,” Grandage gushed. “He knew other people’s lines; he knew all of his lines. He knew why he wanted to talk about it, why one scene worked this way and another worked.”

Grandage continued, “Because he hasn’t done much, he hasn’t developed the ability to work out tricks or even lie. He can only do it truthfully and as he knows it.”

The character of Tom is “confused,” as Grandage said. “It’s made more problematic by the fact that he’s a policeman, and he’s in a career that is about upholding the law. And the law in the country at the time is about everything he feels — the complexity of it is something that whoever was going to play younger Tom and older Tom needed to somehow understand and absorb.”

And Styles is the perfect center for a love triangle: “This story is about two people that are in love with Tom, slightly obsessed with him,” producer Rogers said. “Harry — the world is so transfixed on him, on his every move.”

Styles previously addressed the nude scenes in the film — which Grandage likens to taking inspiration from “Hiroshima mon amour” and employing intimacy coordinators — and teased that he will show his “bum bum” and be fully nude onscreen.

See the steamy first look for “My Policeman” below. 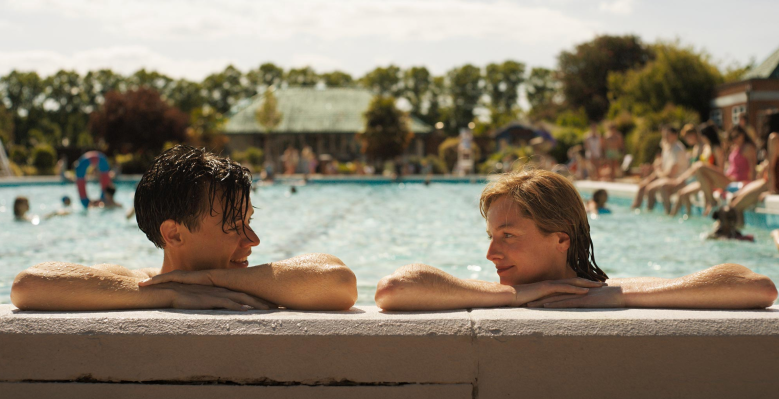