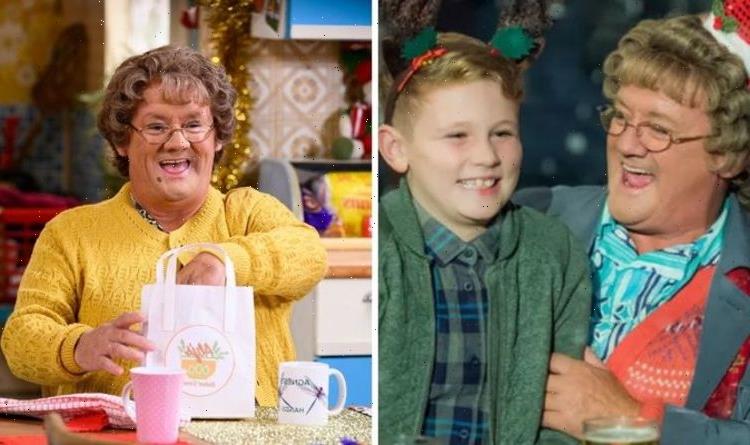 Mrs Brown’s Boys actor Jamie O’Carroll, who played Bono in the hit BBC comedy series, looks world’s away from his sitcom character. His dad Danny recently shared a proud snap of his teenage son following some exciting career news on his social media. His followers were left gobsmacked by the youngster’s transformation, with many commenting on how different he looked from his character Bono.

Jamie starred in Mrs Brown’s Boys alongside his dad Danny O’Carroll and his mum Amanda Woods, who played Buster Brady and Betty Brown, for a decade.

Jamie, now 15, has physically outgrown the role of Bono and his parents shared a snap on social media to prove it.

His proud dad Danny took to Instagram recently to share the news his son is currently playing with Ulster Rugby’s youth side.

The heartwarming photo left many fans commenting on how grown-up Jamie was while also passing on their congratulations.

Marion commented: “Can’t get over him! What a credit to you both.”

Patricia added: “He certainly has grown. Strong and handsome.”

Karen Taylor Steward remarked: “He’s outgrown you both, so tall. Where has all the tallness come from?”

Chantal Legrand quipped: “Holy s**t, he’s grown so much! The last time we saw you together he was almost a head smaller than you Danny.”

A follower of Danny’s called Anna added: “You realise you share your boy with us staunch Mrs Brown fans! I’m so proud of ‘not so little Bono’. Well done to his mum and dad.”

D Mooney said: “Goodness, when did he grow up? Well done Jamie.”

Mrs Brown’s Boys made the announcement earlier this year the show would return for a live special in October.

For the Halloween special the residents of Finglas prepared for a costume competition and party at Foley’s.

However, Agnes got the shock of her life when she was visited by a ghostly figure.

The ghost turned out to be her late husband Redser Brown (Red Shields, who usually plays Mark).

Agnes was the only one who could see the ghostly sighting but she finally convinced her family to perform a séance to get rid of him.

The show aired without a hitch as the well-loved cast managed to get through the special without stumbling any major lines.

However, only 2.6 million viewers tuned into the special, which was a million fewer viewers than the 2020 Christmas special.