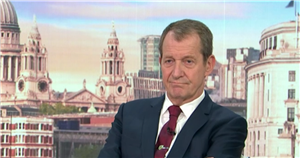 Things became very awkward quite quickly on Tuesday's Good Morning Britain, after MP Kit Malthouse claimed to not know where Prime Minster Boris Johnson was, but cameras were able to spot the PM sitting only a few metres away.

Presenters Alastair Campbell and Susanna Reid were hoping to have an interview with Boris, who hasn't appeared on the show for over a year.

But to their disbelief, the PM, who was at the Conservative conference in Manchester, chose not to not take part. Instead MP Kit decided to take one for the team.

However, Kit tripped up massively when he said he had no idea where Boris was even though he was being interviewed by another media outlet not too far away.

Alastair asked Kit about Boris' honesty and questioned if he is honest all the time.

Kit replied: "In my experience yes he is.

Susanna chimed in and said: "Er are you having to say that because he's sitting right next you Mr Malthouse?"

But as the camera panned to the left Boris was sitting down being interviewed by another journalist.

One fan penned: "Malthouse saying he doesn’t know where Johnson is, he can’t see him. Camera pans to the left," followed by a laughing emoji.

Another viewer said: "For anyone who missed #gmb check out this comedy gold as that lying stuffed suit Kit Malthouse is shown for what he is."