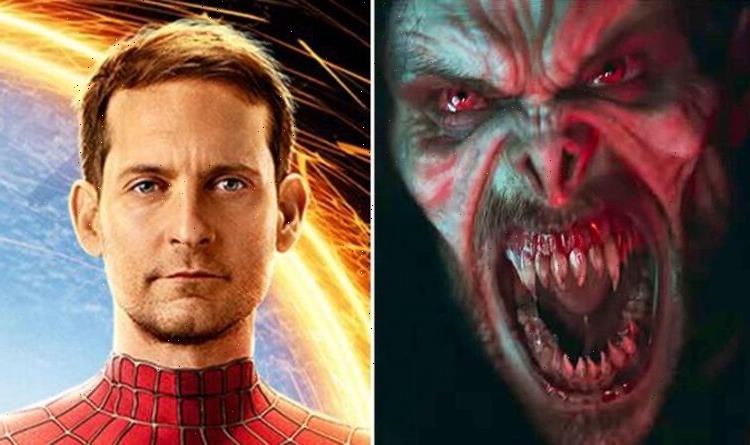 Believe it or not, the first trailer for Morbius debuted in January 2020, long before the Sony Marvel movie’s delayed release last week. Interestingly the teaser featured a strange scene with Tobey Maguire’s Spider-Man on a poster, that didn’t make it into the movie. And now the film’s director has spoken out about this strange occurrence.

In a new interview, Morbius director Daniel Espinosa said: “That image is only in the trailer. So for me, as a director, I only do the movie. I, as a fan, have several kinds of opinions and thoughts about that. But since I didn’t put it there, because it’s not in the movie, and I didn’t put it in the trailer either. [So] if I said something about what I think it is, it would be as a fan. But because I’m the director, I would be accused of knowing something. Which I don’t, you know? If I knew something, I could tell you. [But] it’s not mine. It’s not from my idea, you know? I would love to be honest and responsible, but I can’t, because it’s not mine.”

Having spoken with Cinema Blend, it sounds like Morbius’ director isn’t that sure.

However, we have our own theory. Originally, the film was set to come out before Spider-Man: No Way Home.

The last MCU movie with Tom Holland’s Web-Slinger was Spider-Man: Far From Home the summer before.

That movie’s cliffhanger saw Spidey outed as Peter Parker by Mysterio and framed for murder – a plot point taken up again in the opening of No Way Home.

So, the Morbius trailer was alluding to this, although for some reason the poster was of a Playstation image of Maguire’s Spider-Man.

It seems unlikely that whoever put this in was saying that Morbius was in the same universe as the MCU, but was at least suggesting there was a Spider-Man in this Sony reality.

Certainly, the end credits scene for Morbius implies that that world has its own Peter Parker, which the director has confirmed.

The end of the movie saw a crack in the universe caused by the events of Spider-Man: No Way Home, a film featuring the three Web-Slinger stars in Holland, Maguire and Andrew Garfield.

Michael Keaton’s Vulture, from the MCU, was transported to the Morbius/Venom universe where he met with Leto’s Living Vampire about teaming up against Spider-Man, but which one?

The Morbius director teased that all will be revealed in time. Now given that Maguire’s already fought a Venom variant in Spider-Man 3, surely Hardy’s Eddie Brock is in his universe?

This would mean Morbius exists in that reality too, so perhaps The Amazing Spider-Man will show up if Garfield can be convinced to return.

Whatever the case, the poster in that original trailer appears to have been retconned after Morbius’ release was moved behind No Way Home, so fans shouldn’t overthink it.

Morbius is out now in cinemas.