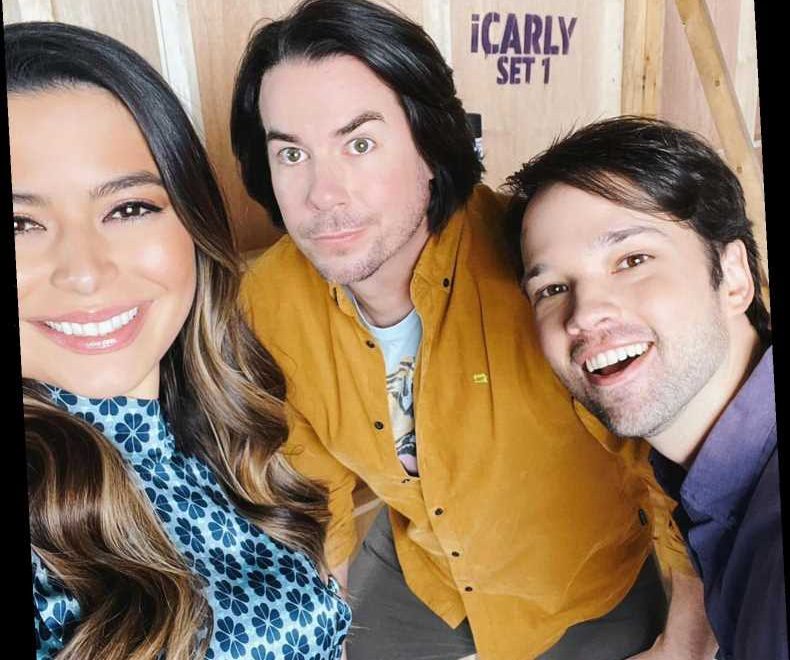 Members of the iCarly nation, unite!

On Wednesday, Miranda Cosgrove shared a photo of herself catching up with iCarly costars Nathan Kress and Jerry Trainor on the set of the Nickelodeon comedy's upcoming revival.

In the selfie, the trio happily pose in front of a set wall printed with the words: "iCarly Set 1."

Cosgrove, 27, posted the shot on her Instagram alongside an emoji of a blue heart.

Meanwhile, Kress, 28, shared the same picture with the caption: "My people 🤗." RELATED: Carly and Sam Forever! Miranda Cosgrove and Jennette McCurdy Had an iCarly Reunion at Coachella

The reunion comes a month after news broke that iCarly would be rebooted on Paramount+, an upcoming streaming service from ViacomCBS.

The new series will be developed by Jay Kogen and Ali Schouten, according to TV Line.

In 2018, Nickelodeon cut ties with Dan Schneider, who created the original iCarly, as well as Drake & Josh, Victorious and Zoey 101 for the network.

"Following many conversations together about next directions and future opportunities, Nickelodeon and our long-time creative partner Dan Schneider/Schneider's Bakery have agreed to not extend the current deal," Nickelodeon and Schneider said in a joint statement obtained by PEOPLE at the time.

"Dan and his Schneider's Bakery team have created a string of lasting, groundbreaking hits over the years including iCarly, Drake & Josh, Victorious, Kenan & Kel and the current number-one hit show on Nickelodeon, Henry Danger," the statement continued.

"We thank Dan and his Schneider's Bakery producers, executives and social media team for their immeasurable contributions to Nickelodeon, and we wish them the best in their future endeavors. And Dan and Schneider's Bakery are proud of the work they did together with Nickelodeon and will always remain big fans of the network."

iCarly originally ran for six seasons on Nickelodeon from 2007 to 2012.