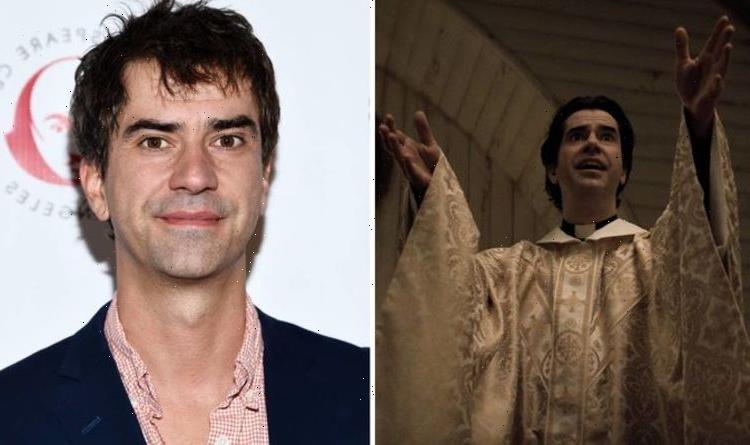 Midnight Mass is based around a small Catholic community whose worlds are turned upside down with the arrival of its new charismatic priest Father Paul (played by Hamish Linklater). He brings miracles and mysteries to the town but what secrets is he hiding? Here’s everything you need to know about the man behind the priest in the latest Netflix horror series.

Father Paul arrives in Crockett unexpectedly as the replacement for its Monsignor.

He brings hope to the religious town which had been desperate to believe and with his miracles, Father Paul is able to reignite their faith.

However, there is a dark side to the priest which will slowly be discovered as the series goes on.

Perhaps the town wasn’t so lucky to have this new priest in the community after all.

Who is Hamish Linklater?

He is best known for portraying Matthew Kimble in the CBS sitcom The New Adventures of Old Christine which he was in for four years.

Since then, Linklater has appeared in The Big C, The Good Wife, Redemption Trail and The Crazy Ones with late actor Robin Williams.

He has been in various memorable series over the past few years in particular.

Some of his biggest roles to date have been in Fargo, Legion and thriller series Tell Me Your Secrets earlier this year.

Midnight Mass came out on Netflix this morning, Friday, September 24, and has already started receiving rave reviews, being labelled as a “bloody revelation” and a “tale of faith gone wrong”.

The limited series is made up of seven episodes in total with each one named after a book in the Bible.

One of the things that attracted him to the series was that he would be working with his real-life partner.

Linklater has been with actress Lily Rabe for the past eight years and have two daughters together.

When asked when he wanted to work on Midnight Mass, Linklater told Collider: “There were a lot of elements that drew me to it.

“As it turned out, Lily [Rabe] was doing it, so any opportunity to work with her, but it started with the writing and the character.

“I hadn’t played a character like that on film, and I didn’t know where it was gonna go or if I’d be able to do it well, so it seemed like a really worthwhile journey to go on.”

Midnight Mass has been labelled as a limited series by Netflix which means there is expected to be just one season.

Actor Linklater also confirmed that he signed a “one-contract deal” which means there isn’t a second season on the horizon.

But if Midnight Mass does gain the backing from subscribers, perhaps those at Netflix will change their minds about its future.

Midnight Mass is now available to watch on Netflix.