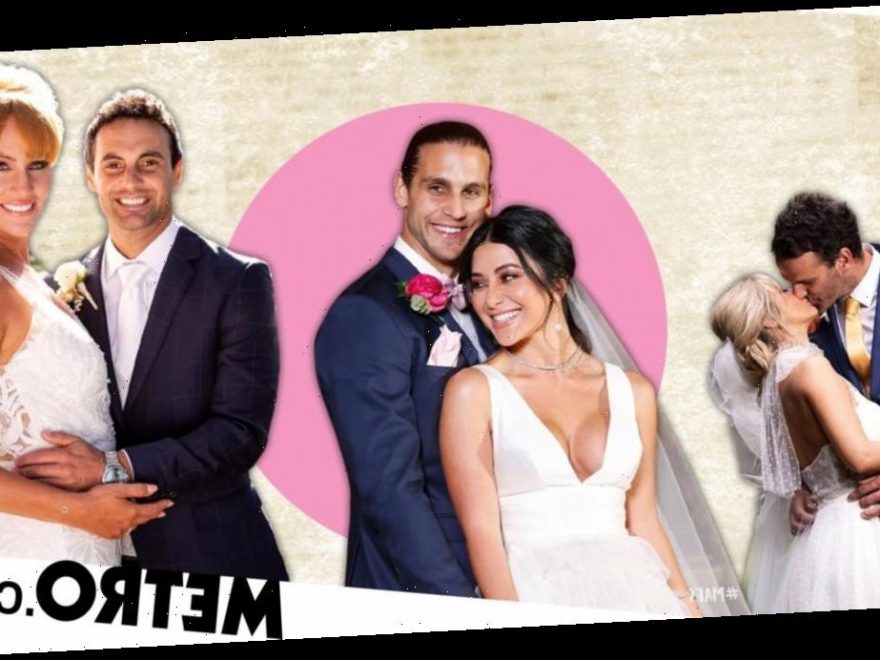 Married At First Sight Australia is officially back on UK screens, as season six is now airing on E4 and, boy, are viewers in for a wild ride.

The series sees two strangers thrown together by a panel of experts and the first time they meet is on their wedding day, as they prepare to say ‘I do’.

The Australian version of the programme is notoriously known for its drama and we can tell you that this season really doesn’t disappoint. In fact, it may just be one of the most intense seasons yet.

But did the course of romance run smooth for at least some couples? In short, yes. Some did make it and are still going strong today, after meeting on the show in 2019 when season six was filmed.

If you want to find out who keep scrolling, if not this is your spoiler warning to get out while you can and enjoy watching in real-time.

Heidi and Mike’s MAFS journey was a real roller-coaster, there were steamy ups and fiery downs and, well, it all just got a little too much for the pair in the end.

While they did make it to the experiment’s final stages, that sees the couples share their final vows with one another, it pretty much went downhill from there.

Cam and Jules are probably the biggest success story of season six. Not only have they stayed together, but Cam actually made history by proposing to Jules in the pair’s final vows.

Since then, the couple have gone on to marry – they wed in Sydney in November 2019 and Heidi served as one of Jules’ bridesmaids, with the pair being the first ever MAFS Australia couple to legally wed.

Officially Mr and Mrs, Cam and Jules are now parents too. They welcomed their son Oliver in October and regularly post the cutest photos with their little man on social media.

Kim Kardashian lookalike Martha and former PE teacher Michael are also still very much together, with the pair – who are both from Melbourne – now living together in Bondi in Sydney.

Michael has since quit his teaching job to launch his own fitness business and Martha is given Kimmy K a run for her money as a beauty influencer on the gram.

While Martha revealed on Australian radio in September that she and Michael secretly split once for a matter of hours, they soon had a change of heart and she insists the pair are ‘very happy’ together.

Things didn’t exactly start off well for Jess and Mick, thanks to his best man’s crude wedding speech, and that basically set the tone for the pair’s relationship over the weeks.

While they did give the experiment a good go, Jess checked out as soon as latecomer Dan came in and found herself going behind Mick’s back to pursue him instead. That led to Mick leaving in week seven and Jess – controversially – was given the chance to see where her relationship with Dan would go.

Mick, however, has been linked to both Lauren and Dan’s ex-wife Tamara since the show.

It’s no surprises to hear, then, that late arrivals Dan and Tamara couldn’t make their marriage work. Despite hitting it off straight away and heading straight for the bedroom, Dan was soon tempted by Jess, leaving Tamara no choice but to walk on finding out about her husband’s betrayal.

Things then got rocky during the reunion show with Jess and Dan, when they showed footage of her secretly getting flirty with Nic.

Jess and Dan broke up shortly after, with their split later being plagued by a whole truck load of messy cheating claims on both sides, that they’ve each denied.

Cyclone Cyrell, as she was affectionately named, kept clashing with husband Nic and the pair just couldn’t get past her trust issues, with both choosing to leave the experiment in week six.

Cyrell has found her happy ever after, though, and is now loved-up with Love Island Australia star Eden Daly and the couple are parents to their son Boston, who was born in February 2020.

Sam and Elizabeth were probably one of the show’s most controversial couples, especially after Sam was seen cruelly commenting on Elizabeth’s weight during their wedding day, going missing for days when they were supposed to be living together and then having an affair with Ines. See, we told you. Drama.

The pair left the experiment in week three and Sam was expertly called out by Elizabeth during the reunion show – which he failed to attend.

She then made a comeback on MAFS the following season and found love with Seb Guilhaus, who she is still dating and has moved in together with.

Ines and Bronson’s marriage was doomed from the moment she found out her husband was a stripper. Ines basically tapped out from the get go and had opted to leave in week one, before changing her mind to stay in week two- purely so she could pursue Sam.

Bronson had been committed to trying to get Ines on board, but little did he know that she was slipping into Sam’s DMs and enjoying secret dates instead.

In scenes fans never expected, Ines was seen breaking down in tears as she learned Sam’s real intentions for their relationship, after he had promised her his feelings were real and he wanted them to get together after the show. Spoiler alert: they didn’t.

Lauren and Matthew had us all believing in love again as they quickly became our favourite couple, after seemingly falling head over heels for each other shortly after tying the knot.

They faced a slight hiccup when Matthew admitted he was a virgin, but that didn’t last long with viewers getting a front seat ticket to him losing his virginity on TV.

Things got hella awkward, however, when Matthew then dropped the bomb that he actually wasn’t attracted to Lauren and, well, it was splitsville from there and all by week two. Sob.

Ning and Mark were proof persistence pays off and they came a long way during the experiment. But, just when you thought the pair were on the same page, Mark decided to throw in the towel on their relationship during the final vows.

Understandably Ning was gutted and branded his decision ‘bullsh*t’, but rumour has it their MAFS journey is now all water under the bridge and the pair are actually quite good friends.

Melissa and Dino only made it to week four – not even Dino’s poems could save their marriage. The pair’s relationship had been struggling to take off in those early stages and things came crashing down for good when Dino secretly recorded Melissa on the phone to her sister.

She had been talking about Dino and he wanted Melissa to know how hurtful her comments had been to him, but, understandably, she wasn’t impressed and accused him of ‘invading her privacy’.

Susie and Bradley, like Dan and Tamara, were late arrivals to season six and, tbh, this was one marriage that was never going to last. They arrived in week four and had already left by week six.

Their tumultuous marriage saw an emotional Billy accuse Susie of ‘bullying him’, after she was seen constantly berating him and telling him to ‘grow some balls’.

Defending her behaviour, that often left Billy in tears, Susie has said: ‘I’m not as bad as people think I am!’

She told Australia’s NW magazine: ‘Viewers are seeing about seven percent of 100 percent of mine and Billy’s time, and they are forming their opinions on that and that’s not enough to form an opinion on… so cut me some slack.’

Rush Hour Crush – love (well, lust) is all around us

Tell us about your Rush Hour Crush by submitting them here, and you could see your message published on the site.