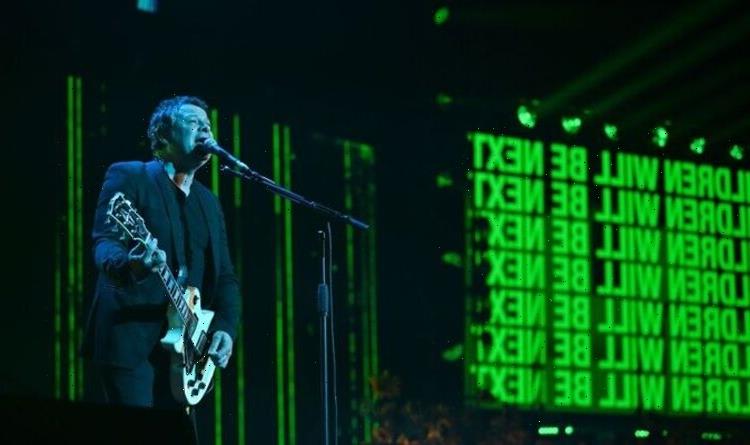 On Tuesday night, ITV hosted Concert for Ukraine, where a host of famous faces and musicians came together to raise money for the ongoing crisis in Ukraine. Manic Street Preachers performed their song If You Tolerate This, Your Children Will Be Next and had the title plastered in bright green behind them throughout their performance. The group were praised by viewers on Twitter for their performance and how much the song related to the ongoing war between Ukraine and Russia.

The Concert for Ukraine was a two-hour long special in which ITV said it “will bring together names from the world of music for a unique event spreading a message of hope and support, and most importantly, raising funds for the ongoing DEC Ukraine Humanitarian Appeal”.

When the song was first released in 1998, it was aimed at the Spanish civil war and the idealism of people from around the world who volunteered to join the International Brigade Franco’s fascist army.

The title of the song comes from a republican propaganda poster of that time, and the slogan of the poster was “if you tolerate this, your children will be next”.

As the Manic Street preachers performed, audiences were on their feet and on social media to express how much they enjoyed the performance and the message.

Graeme McKenzie commented: “Who would’ve thought the lyrics ‘If you tolerate this, then your children will be next’ would resonate with so many across the world in recent months.

“Hearing Manic street preachers sing this tonight at #ConcertForUkraine will reinforce this feeling with so many.”

User @Welshtabby said: “If you tolerate this, then your children will be next, incredibly poignant performance from Manic Street Preachers #ConcertForUkraine.”

@CameronMustard wrote: “If you tolerate this, your children will be next. Some message from Manic Street Preachers #ConcertForUkraine.”

Saleh Saeed, chief executive of the DEC, said of the concert: “It is heart-breaking to see the deepening crisis unfolding in Ukraine as more refugees cross the borders each day with nothing more than what they can carry.

“The situation for those inside the country is becoming increasingly precarious, but there is something we can all do to bring hope.

“Funds raised by this concert will make a real difference to those affected by the conflict, sending a strong message of love and enabling DEC charities to help now with urgent aid as well as helping to rebuild lives in the months and years ahead.”

Eurovision Song Contest winner Jamala also joined the line-up of musicians to perform at the concert and gave a powerful performance.

Jamala represented Ukraine in the Eurovision Song Contest in 2016 and won and has released six studio albums within the last 10 years.

Jamala, who was forced to flee her home in Ukraine two weeks ago, delivered an emotive performance of her Eurovision winning song 1944, holding a Ukrainian flag throughout.

At the end of her performance, Jamala held the flag high and delivered a message of support to her home country.

All sponsorship and advertising revenue generated from the broadcast of the event, which is expected to raise over three million, will be donated by ITV to the DEC fund.

Concert for Ukraine is available to watch on ITV Hub.