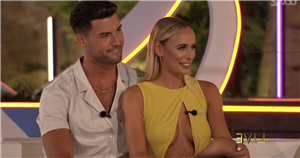 Love Island viewers claimed they "knew" Millie Court and Liam Reardon would win the £50,000 cash prize thanks to a "giveaway" sign.

But viewers had dashed hopes for Chloe, 25, and Toby, 21, after realising they were standing on host Laura Whitmore's right-hand side.

A theory circulated by fans online claims that whichever couple is standing on the host's left-hand side will win the competition, with it coming true six times.

Get exclusive Love Island stories and fabulous updates straight to your inbox with OK!'s daily Factor 50 newsletter. You can sign up at the top of the page.

The only year the theory didn't come true was in 2019, when Amber Gill and Greg O'Shea were stood to the right of former host Caroline Flack.

One viewer wrote on Twitter: "very strangely it's always the couple on the left of Caroline/Laura that wins!!! Congrats to Millie and Liam."

A third added: "I read a thing earlier that said the couple stood on the left of the love island host are always the winners. Millie and Liam were stood on Laura Whitmores left."

Another penned: "So Millie and Liam were on Laura's left, who found out this theory?"

While a final fan predicted: "Millie and Liam are on her left. It's them."

Viewers were left divided by the couple's victory, with one fan taking to Twitter to write: "Liam and Millie won. Well that was a shocker… it’s not like the producers have been setting that up for weeks!!!"

A second added: "I KNOW WE SAID WE SHOULD VOTE MILLIE TO WIN AFTER LIAM F**KED HER OVER IN CASA AMOR LIKE WE DID IN SEASON 5 WITH AMBER, BUT THAT DIDN'T APPLY WHEN SHE'S STILL WITH THE GUY!!"

While a third said: "how THEE f**k does millie and liam win…he legit betrayed her and you losers let them win??"

To keep up to date with all of the Islanders outside of the villa, make sure to sign up to OK!'s daily celebrity newsletter and Factor 50 – your one stop for all the latest villa news.