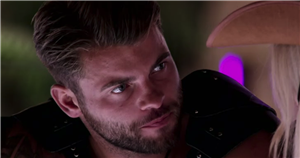 Love Island has released an explosive first look at Friday's episode where it has teased drama for Liberty Poole and Jake Cornish.

During Thursday's episode, Liberty, 21, had doubts about her relationship with Jake, 24, especially after he spent time talking to Mary Bedford rather than her.

And after it was revealed that his heart raced the most for Millie Court's dance during a challenge in the villa, it appears that there is drama in store for the couple on Friday.

In the teaser clip, it sees Liberty and Jake having a serious chat where he admits things haven't been right in their relationship since movie night last week — after she saw a clip of him questioning his attraction towards her.

Get exclusive Love Island stories and fabulous updates straight to your inbox with OK!'s daily Factor 50 newsletter. You can sign up at the top of the page.

Jake says to an unimpressed Liberty: "I feel like, ever since the movie night onward, I just feel like it's not been the same."

Earlier in the night, Liberty was left doubting her relationship with Jake after he prevented her from running over to hug her best friend Kaz Kamwi after she went exclusive with Tyler Cruickshank and made the new couple come over to them.

"I'm a smart girl and a good judge of character, and I feel like what Jake and I have is genuine and real. But the whole staged thing felt a bit staged over there, a bit icky.

"The person I fell for was Jake, a water engineer, what I have with him is real, or at least I think it is from my side. That tonight, that situation, didn't sit right with me."

Love Island continues nightly at 9pm on ITV2 and ITV Hub. Episodes are available the following morning on BritBox.