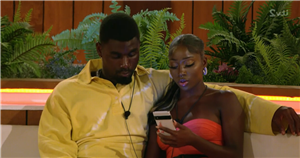 During Sunday’s visit to the Spanish villa, viewers finally watched the parents of the ITV stars walk into the villa where they reunited for the first time in eight weeks.

But it’s fair to say that their family members didn’t hold back when it came to getting their children to face up to their mistakes following their unfaithful actions in Casa Amore.

While the parents took it in turns to go into the villa, viewers were left utterly speechless when the hotel waitress’ mother and sister confronted Dami on his three-way kiss with Summer Botwe and Chyna Mills.

As she attempted to seriously ask him about his actions while in Casa Amore, Indiyah's mum accidentally called him Deji.

Utterly shocked at the mistake, Dami screamed in surprise as the entire group burst into laughter after Indiyah made the same mistake just days after she returned to the main villa.

Dami then turned to her and politely corrected her, saying: "My name's Dami though, it's Dami."

Indiyah's mum continued: "Dami, I've been watching you recently and I'm glad [because] you seem to be redeeming yourself."

And it's fair to say the hotel waitress was left completely red-faced at her mum's mistake, as she shared her embarrassment in the Beach Hut later that day.

She confessed: "Like mother, like daughter. When she did that I literally just wanted the floor to swallow me up.