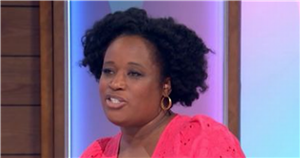 Charlene White revealed on Monday's Loose Women that she "fractured her toe" on Sunday night after the Euro 2020 final left her "knackered" due to finishing late with extra time and penalties.

The presenter, 41, said that she will be "hobbling around" for the rest of the week in trainers after "slipping" down the stairs following the nail-biting match where England lost to Italy at Wembley Stadium.

Charlene explained that she went to check on her children in case her "screaming" downstairs had woken them up and due to her "tired state" she accidentally took a tumble.

The ITV star said: "Oh my trip down the stairs, it was because of the football. I was so knackered last night, and because it went to extra time it finished really late.

"So I popped upstairs to check on the kids, to make sure all of our screaming hadn't woken them up. As I was coming down the stairs, I just wasn't concentrating and I slipped and I think I probably fractured my toe."

She added: "So I'll be hobbling around for the rest of the week I reckon unfortunately."

Charlene also shared a picture of her injury on Instagram ahead of the ITV show, which she captioned with: "Guess who fell down the stairs in a tired state last night?? Hence the trainers today," followed by a sobbing emoji.

Elsewhere on Monday's episode, the Loose Women panel suffered a shock when the set collapsed live on air. Charlene, Coleen Nolan, Storm Keating and Jane Moore were fronting the show, which saw them discussing the Euros fallout, "mum guilt" about working and childcare, and what life would be like if they married their childhood sweetheart.

However, things temporarily descended into chaos when one of the panels situated behind the stars came out of its frame and clattered to the ground.

Coleen was seen jumping out of her skin as the loud bang was heard, before the camera panned out to reveal the panel falling over behind Storm. To which host Charlene explained: "Oh, that's just part of the set… there it goes! It's not normally a health and safety nightmare like this."

With Coleen adding: "I'm not being funny but the budget on this show is off the scale, let's be honest!"

“I thought it was my husband breaking in not wanting to talk about my childhood sweetheart!” laughed Storm, referencing her husband, Ronan Keating.

Loose Women continues on weekdays at 12:30pm on ITV.