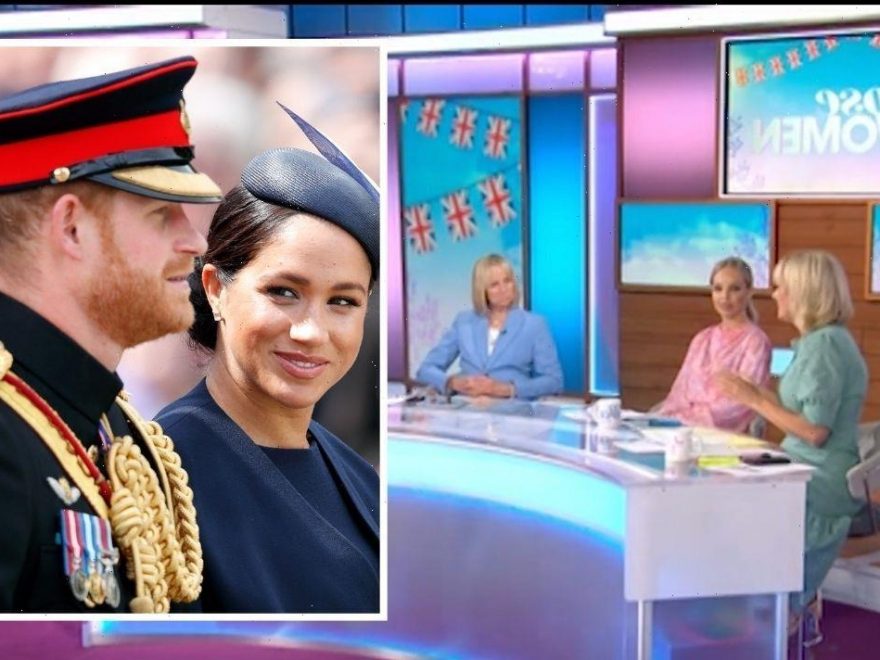 The Loose Women panellists Carol McGiffin, Jane Moore, Katie Piper, and Linda Robson weighed in on The Queen’s Platinum Jubilee on Monday’s instalment of the ITV show and questioned if Prince Harry and the Duchess of Sussex will use it to get footage for their Netflix collaboration. Although the event will be heavily filmed and broadcast live, the Royal duo’s Netflix crew are reportedly not allowed an access-all-areas pass.

Harry and Meghan have been a talking point ever since they left the UK to start a new, less Royal life for themselves in California.

With multiple events set to occur over the coming week and weekend to celebrate The Queen’s 70 years on the throne, the Loose Women ladies wondered if Harry and Meghan would be ignoring any filming bans to capitalise on the unique celebration.

Presenter Katie said: “It’s nice to see the brothers back in contact.”

Read More: ‘Want to go and punch their lights out’ Jane McDonald fumes as filming interrupted

Diving deeper into that point, she asked her fellow chat-show hosts: “Are they going to be bringing Netflix Cameras with them?”

Her comment seemed to be met with mixed reviews.

Carol commented: “I can’t see that” before Linda added: “They won’t be allowed in the palace.”

Although there might be restrictions for their camera crew to get up close and personal with the rest of the Royal family, Jane did point out that “they could probably do it from afar, with somebody in the crowd”.

Sick of talking about the pair, Carol grunted, letting out an exasperated moan as Jane, ending the segment: “It will be nice to see them.”

It is already known that both Prince Harry and Prince Andrew will not appear on the Buckingham Palace balcony as part of the opening celebrations for the Queen’s Platinum Jubilee.

However, Buckingham Palace has said that the monarch will be joined by “members of the Royal Family who are currently undertaking official public duties.”

Viewer Kelly Free had an issue with the presenters discussing the matter and said: “#LooseWomen All these @ITV morning Shows. It’s @GMB @thismorning, @loosewomen their one’s who can’t keep Harry and Meghan name’s out of their mouths the couple are busy living their life.

“Soon as the couple breathe their topic of conversation on these show’s.(sic)”

Kerry Taylor Jones added: “Why is that even a question on #LooseWomen? Are we ready to welcome Harry and Meghan back is nothing to do with anyone that’s the Queen’s family it’s her celebrations, and she wants them there people need to leave them alone.” (sic)

@Just_Me_Boo described: “@loosewomen, Harry, Megan & the children coming over for the Queen… lovely.

“PLEASE why not discuss what is important “Prince” Andrew.. just his attendance at any event is revolting. I don’t wish to see him.. regardless if he’s her favourite. #PlatinumJubilee.”

Some viewers appeared to be fed up with all of the chatter about the Platinum Jubilee and not just Harry and Meghan.

“Just as you don’t care about Harry and Meghan, about 50 million of us couldn’t give a monkeys about Liz and her jubes. #LooseWomen,” (sic) Ralph Hapschatt chimed in.

Loose Women airs on weekdays at 12.30pm on ITV.