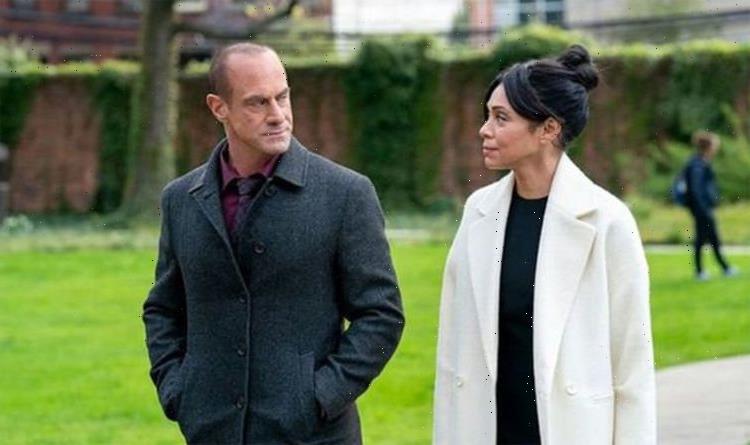 Law and Order fans were overjoyed when former star Christopher Meloni announced he would be returning as Elliot Stabler in a new spin-off series, Law and Order: Organized Crime. As Stabler hunted ruthless crime boss Richard Wheatley (played by Dylan McDermott), he got closer to Wheatley’s ex-wife Angela (Tamara Taylor). However, a recent fan theory has emerged that suggests Stabler’s life could be in danger in the recently renewed season two.

After a 10-year absence from fighting crime, Meloni’s Stabler headed back to New York to take down mafia boss Wheatley with a new crime task force.

While Wheatley was highly suspected to be behind Kathy’s murder, it was later revealed he had manipulated Angela to put the hit out on her.

Stabler struggled after her death and felt immense guilt over failing to save his wife, which led to a reunion with former partner Olivia Benson (Mariska Hargitay).

On Organized Crime, Angela’s life was again threatened by her ex-husband as he arranged for her to be poisoned in the hospital.

Wheatley has been targeting his ex-wife for cooperating with Stabler on his case against him.

However, Angela met Benson on a crossover episode with SVU and it was clear that, after 10 years apart, Benson and Stabler’s chemistry was undoubtedly still there.

After failing to break the former partners’ unique bond, will a heartbroken Angela reteam with Wheatley to exact revenge on Stabler in season two?

Though, the last we see of Angela is in the season one finale right after she is injected with poison.

Whether or not Angela survives remains to be seen but, if she does, the character will certainly struggle to see Stabler and Benson getting closer.

Angela isn’t the only one who is aware of Stabler’s close relationship with Benson, as Wheatley pointed it out during an interrogation in the finale, titled Forget it, Jake; It’s Chinatown.

McDermott’s character was seen toying with Stabler as he revealed that he knows Angela has feelings for him, but that Stabler will always care for Benson more than anyone else.

This makes it highly likely that Wheatley will use this knowledge against the cop in the future.

Angela was curious enough about Benson that she asked her lawyer for some intel on her.

She appeared worried that Stabler is in love with her.

So could her rejection from Stabler lead her down the dark path of revenge, or will Benson be their next target?

Angela star Taylor discussed her relationship with Stabler with The Wrap recently, saying: “I think she can handle whatever the truth is. If she is indeed truly in love with Stabler, he is not her first love, and I don’t think she expects that she would be his.”

The actress added that she believes both Angela and Stabler are “mature enough” to figure out their relationship.

However, an Angela and Stabler relationship will not be music to fans’ ears as many fans are desperate for Benson and Stabler to end up together.

Taylor joked: “They’re just a little p***ed with Angela because she’s getting in the way of a relationship that they’ve been rooting for for 22 years.”