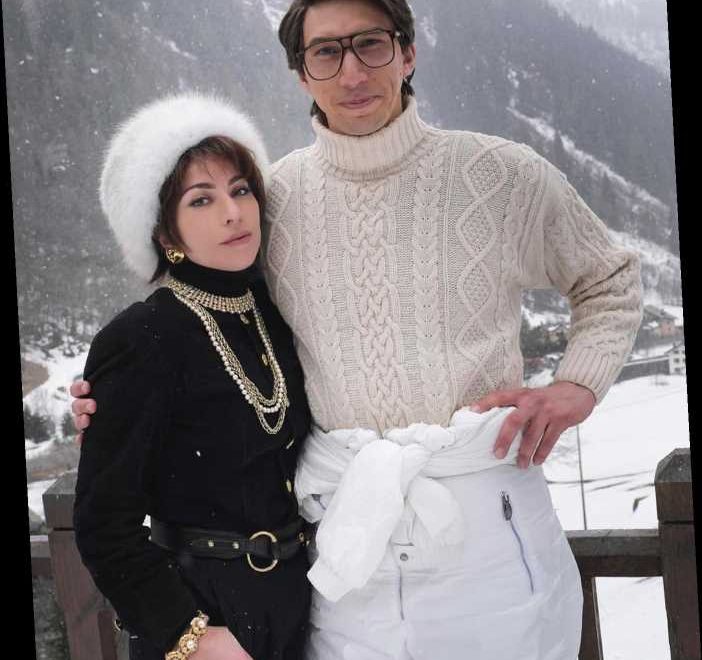 Lady Gaga and Adam Driver are all styled up for their upcoming movie.

The Oscar-winning singer and actress, 34, shared a first look at the murder drama film House of Gucci directed by Ridley Scott on Tuesday.

Dressed in full stylistic regalia, Gaga wore a black turtleneck, black pants, a black belt and gold necklaces, earrings and bracelets as she stood next to Driver, 37, in the Italian Alps.

The Star Wars actor wore a beige turtleneck sweater with white salopettes with the sleeves tied around his waist and wide-rimmed black glasses as he smiled with his arm around his costar.

The movie follows the story of Maurizio Gucci (Driver), the head of the Gucci fashion house, and his ex-wife Patrizia Reggiani (Gaga) and the aftermath of his death after Patrizia hired a hitman to kill him in 1995.

Maurizio and Patrizia married in 1973 and in May 1985, the businessman left his wife for a younger woman after 12 years of marriage. Their divorce was finalized in 1991. In 1995, Maurizio was shot and killed by a hitman Patrizia hired on the steps outside his office in Milan.

Patrizia, who became known as the "Black Widow," was convicted of arranging her husband's murder in 1998 and sentenced to 29 years in prison. Their daughters, Alessandra and Allegra, asked that her conviction be overturned, claiming her brain tumor had affected her ability to reason, according to Vogue.

The two were successful and in 2000 an appeals court in Italy reduced Patrizia's sentence to 26 years. She was released in October 2016 after serving 18 years in prison due to good behavior.

Patrizia is entitled to, and collects, an over $1 million annuity from the Gucci estate, as well as a back-payment of over $22 million which accumulated during her time in prison due to an agreement signed in 1993, according to The Telegraph.

The film is based on the novel The House of Gucci: A Sensational Story of Murder, Madness, Glamour and Greed by Sara Gay Forden.