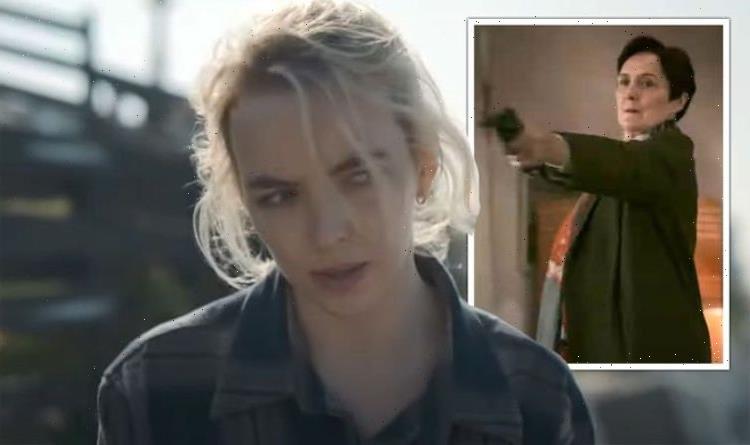 The American spy thriller Killing Eve dropped a 30-second teaser ahead of the show’s fourth and final outing. Fans were introduced to the hit drama series back in 2018 which saw Eve (played by Sandra Oh) a hard-working M15 agent being placed in the direct path of Villanelle (Jodie Comer) a cutthroat assassin. The two women, who play a game of cat-and-mouse throughout, find themselves strangely drawn to each other in a tempestuous relationship.The latest trailer for the upcoming season release warned fans there may be no happy endings.

The much-loved drama series is based on the Villanelle novels by author Luke Jennings, the third and final books were published last year.

The show’s first instalment was created by the award-winning Fleabag star Phoebe Waller-Bridge.

The Crashing star was then replaced by Sex Education’s Laura Neal, who took the reigns.

In spite of her step down, the original boss Waller-Bridge continues to be an executive producer for the hit BBC Three drama.

The trailer picks up from the end of series three where Eve and Villanelle are standing back-to-back on London’s Tower Bridge.

The eerie voice of M15 operative Carolyn can then be heard asking: “Do you ever think what might have happened if we hadn’t done what we did?”

Making spines tingle, the star added: “People like us aren’t made for happy lives with happy endings.”

The clip then flashes through some of the upcoming scenes from season four.

Leaving fans to summarise, viewers are briefly shown two new female characters, one holding a cardboard box and another who appears to be carrying a dead sheep on their shoulders.

Fans have started to speculate on what new obstacles Eve and Villanelle will face.

The teaser concludes with Eve on a mobility scooter while Villanelle hobbles beside her, with Eve asking: “Wanna ride?”

Speaking ahead of the show’s premiere, executive producer Sally Woodward Gentle revealed: “Eve and Villanelle, having left each other in total turmoil on Tower Bridge…”

”Figure out what they mean to each other and what their lives now stand for.”

Sally added: “And while Carolyn has shot a man in cold blood, she is trying to find out who is responsible for the hit on her son.”

“This one is going to be a lot more personal and passionate than the seasons before,” the producer added.

While not much is given away, trouble could be on the horizon for Villanelle’s handler Konstantin, who appeared to have been pushed into a body of water.

Before the show’s highly-awaited return, viewers were treated to a behind-the-scenes look at the final season at Eve wearing a short blonde wig and sunglasses.

Another image shows Villanelle looking angelic in a white dress.

Killing Eve season 4 airs in the US on BBC America on February 27, with a UK air date yet to be announced.